When you become a parent, life becomes a blur of feeding, toileting, lack of sleep, and crying. That’s just the adults, not to mention the children. We get so wrapped up in trying to provide the best possible upbringing for our children, that it’s easy to see how we simply forget to look after ourselves as well. This includes exercise.

When my second son was born, I really struggled to find the time to even do simple daily tasks like shower and eat. As much as I loved running pre-pregnancy, it was the last thing on my mind with a new baby to look after, although I did miss it.

Luckily, I soon learned that having children did not have to be a barrier when it came to running, when a friend gifted me a buggy that was suitable for running with. After the initial struggle with adapting to buggy running, I soon discovered a stronger love for running than before. 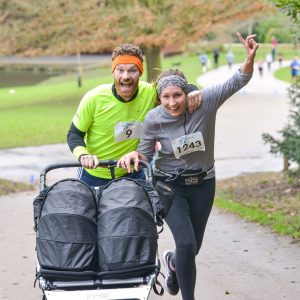 I started slow and short, and gradually built up my speed and distance over time. I found the best way for me to fit my run into my routine, was to go right after I had dropped my eldest son at school. As I was already out, there was no excuse not to go running. This worked perfectly once I got over the embarrassment of walking to school in my neon activewear. Best way to combat this is to go as bright and garish as possible. Even better with the odd vomit stain. Might as well own the stares! I figured that by running early in the morning, I had no time to talk myself out of it, and it’s a great start to the day.

My son loved being out in the fresh air on our runs. When he was younger, he would always nap while I was running. This was absolute bliss. It gave me a bit of peace and head space, which was much needed in the early days. Now he’s a toddler, he spends the whole time demanding snacks, shouting out at random things that take his interest, throwing toys (annoying when I have to run back and grab them), and rocking back and forth urging me to go faster. Quite often I find myself having to sing nursery rhymes and point out different things we see. He clearly couldn’t care less that I can barely breathe at the time.

When my eldest son is off school, he joins us and runs too. It’s such a great family activity that we all enjoy doing together, and I love setting a good example for my children to lead a healthy lifestyle. We recently discovered Park Run as a family, which is now a firm part of our Saturday mornings.

My running ability has improved so much since using the buggy. I’d definitely consider it as great strength training, as I keep smashing “PBs” lately.

Then there’s the kudos from passers by. Every day I get so many positive comments from perfect strangers. It’s such a confidence boost and really makes me feel like I should run with a cape and an “S” for Super Mum on my top.

As a result of buggy running three to four times a week, I’ve been able to train for, and complete my first half marathon. It’s brilliant when you don’t need to worry about childcare with the time and commitment needed for training. I have even completed a 10k race with the buggy, as some races will allow buggies if starting at the back, but always ask permission first.

I really can’t recommend running with a buggy enough. Give it a try. There are often cheap second hand ones available online. Don’t put too much pressure on yourself too early, just relax, enjoy and get out as often as you can. Bear in mind that children can be unpredictable and some days all the bribery of Paw Patrol in the world, will not get them in that buggy.

Just go with the flow and be prepared for some runs to be less successful than others! 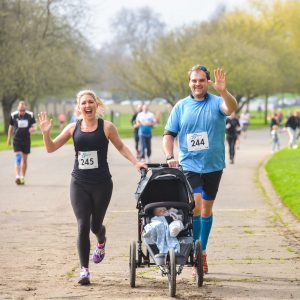