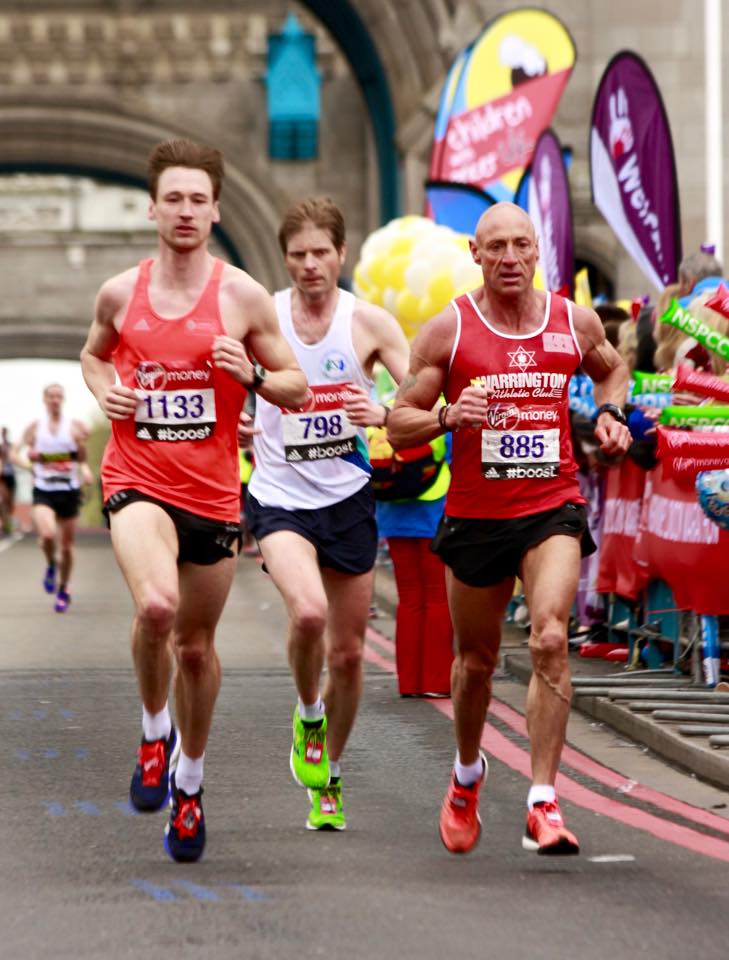 As I mentioned earlier Ben Green is my son. My preparation and Ben’s preparation couldn’t have been more different for the 2015 London Marathon. I think I only 3 days of non training in 2015 before April 26th, and one of those was the day before the race. I had virtually no injuries or even niggles. My preparation had been almost perfect.
Ben’s preparation was the exact opposite, I think he only had 7-10 days from January to April when pain from an injury didn’t stop him from training at his full potential.

24 hours before the start of the race we made our way down to the Excell Centre to register and pick up our race numbers. I was still unsure if it was wise for Ben to run even at this late stage. His hip pain had been so bad that 10 days before the race he had a cortisone injection directly into the hip joint just to enable him to have a slim chance of competing.

Ben’s younger brother Adam was also running the marathon and we spent the morning at the Excell chatting to various people before we decided to head back to Wimbledon and put our feet up for the rest of the day.

April 26th, race day. Alarms had been set at 6.30 to give us plenty of time to eat breakfast, wake our bodies up and catch the train down to Blackheath.

Ben and I were starting on The Championship start and Adam was starting on The Blue start line. We arrived at Blackheath and made our way across the common to our respective starting areas. We wished Adam good luck and offered some last minute advice, which he didn’t really need, but it’s a difficult time just 1 hour before the start of perhaps the most hardest physical activity that a human can take part in. So words of encouragement and luck are the only thing a parent can offer his son at this time.

15 minutes before the start, check the chip timing tabs on my shoes, strip off into race kit and make our way to the start line.

5 mins before the gun and standing on the start line, I thought about my training for the last 6-7 months, the 6kg of bodyweight that I had lost. My almost perfect preparation. My legs felt good. This was going to be my day, I was certain!

The gun exploded and we were off. I settled into my pace within 200m and I felt strong and confident. I ran with Ben for the opening 5k (17.41). I could see Paula Radcliffe 40 metres ahead surrounded by dozens of male athletes. At this stage I didn’t know if she had planned this or it was just runners trying to get on TV by running alongside the female world marathon record holder. She slipped from my mind and I concentrated on my own race and maintaining a steady rhythm. Approaching 10k at Cutty Sark (35.27) I realised that Ben wasn’t with me, I had a quick glance round and seen him 15metres behind. I thought his hip might have been giving him problems. There was nothing I could do about that now so I concentrated on myself and then suddenly realised that Paula was just a couple of metres ahead of me. I settled into her group for a few seconds but realised immediately that her group were slowing down. I moved out and overtook Paula, the noise from the crowd cheering her was unbelievable, I couldn’t hear myself think. I slightly accelerated just to get away from the noise so I could be alone in my own thoughts of concentration. The next few miles were uneventful and I passed 15k in 53.32. I still felt relaxed and my pace was consistent and controlled.

At 10 miles I heard a familiar voice shout ‘DAD’, I glanced to my right side and there was Ben running easily. My spirits soared and we chatted briefly. I asked him how his hip felt. His reply was ‘don’t ask’. Enough said, let’s get on with it.

As we approached Tower Bridge we still ran stride for stride and our pace was good. Onto the approach of the bridge and Ben grabbed a drink from the drink station. He had a mouthful and then offered me the bottle. He was 2 strides ahead and I couldn’t quite reach the bottle. Without thinking or looking he threw the drink 2 metres directly up in the air and as it came down it landed perfectly in my hand. The crowd went mental at this, it must have been hilarious to watch and we couldn’t have rehearsed it better.

Running over Tower Bridge and towards The Tower of London with my son is possibly one of the highlights of my life, especially as my race was going to plan. I had no intention of asking Ben again how he felt. We made our way through halfway (75.30). Shortly afterwards Ben said 2 words to me “I’m off”. I told him that I didn’t want to go any faster just yet and I had to let him go.

I kept Ben insight up until 16 miles. At this point I thought to myself… Ok, 16 miles run and just 10 miles to go. I asked myself how I felt. I quickly assessed my body, I smiled to myself, I felt good. I started to pick off runners that were beginning to fade, it gave me something to aim for and I started to pick off more and more.

Going through 20 miles in 1hr 57mins I still felt good and now as we approached the Tower of London for the second time the crowds really started to swell and the cheering seemed to get louder by the minute. At 22miles I thought just 4 miles to go, I still felt really strong and I was still overtaking runners. I could see Ben in the distance, but he was running even faster than me. I couldn’t believe that he was going to have such a fabulous run on so little training. He was ripping the training manuals up and denying the laws of marathon running.

Along the embankment I still felt in control and I had another gear to offer if needed, but I decided to wait and be patient. For the last 12 weeks this had been the point of the race that I had been visualising on my long lonely runs. It was at this point that it could all go wrong if I had misjudged my race. Ben had now moved out of view and the thought of him being ahead lifted my spirits and let me dig just a little deeper.

As I approached 25 miles and the turn at Big Ben I decided to use my final bits of energy. I upped my pace and to my astonishment my legs easily accelerated, I was now running flat out for the 1st time and I was thoroughly enjoying it. I heard Matt Wood give me shout in the last mile as I continued towards the finish. I ran the whole of the final mile with a huge grin on my face.

As I turned past Buckingham Palace and into the final 100 metres I could see the finishing clock on The Mall, it said 2hr 31mins 20 secs. In the next half minute I became overcome with emotion. I knew that if another 50 year old man had run faster than me in this race, then they would have deserved their victory. I crossed the finish line in 2hr 31mins 56secs.

I was greeted by Ben at the finish. His time was 2hr 30mins 14secs, I couldn’t believe how he had run that fast off so little training.

As we had our photographs taken and then claimed our baggage, I looked at my phone. There was an official text message from the race.

Ben and I broke the Guinness World Record for the fastest marathon ever run by parent and son.

Adam finished the marathon in 2hrs 58mins.
All in all, a good day for myself and my 2 sons… Ben & Adam Green 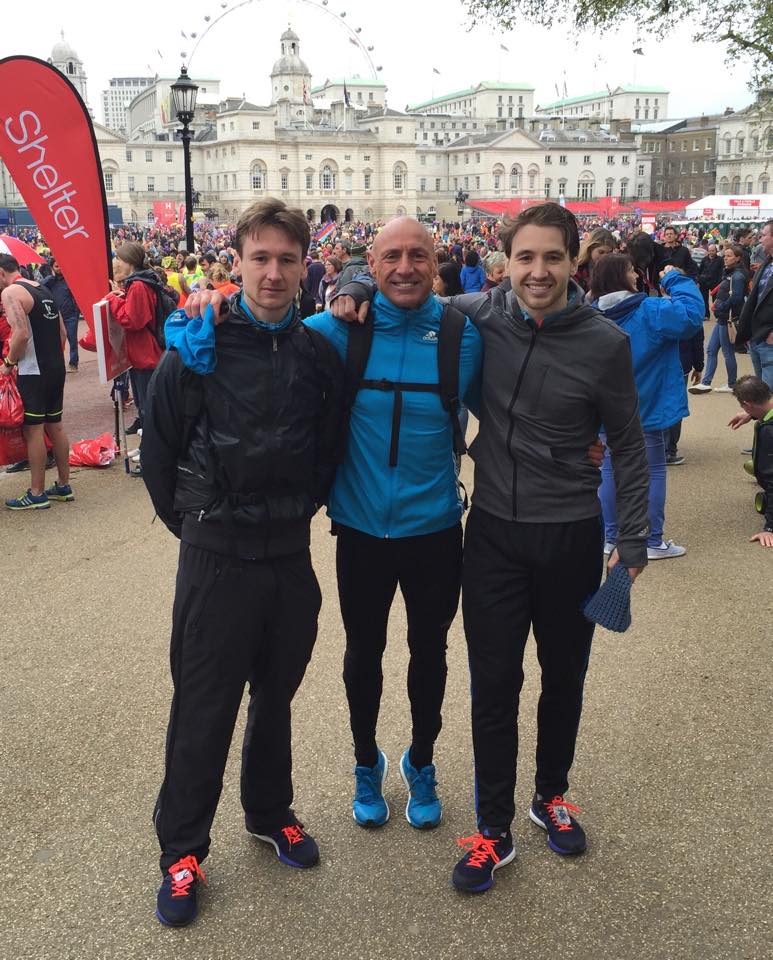