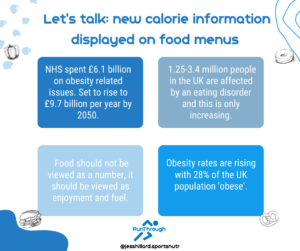 Last week, you may be aware, the government has introduced a new law to restaurants with over 250 employees, they now must display calorie counts on menus… Now this isn’t directly related to running as such, but it is a huge change within the foodie world. We are now going to see calories plastered over food menus in restaurants which will affect a lot of people… in maybe good, maybe bad ways. Therefore, I thought I would clear a few things up regarding this, coming from a qualified nutritionist point of view…
–
The NHS spent £6.1 billion on obesity related issues in 2013/14 and this is set to rise to £9.7 billion per year by 2050. This is one of the main reasoning behind this new law, however, research really contradicts this and suggests that reading numbers doesn’t have a huge impact on changing your order.
–
Between 1.25-3.4 million people in the UK are affected by an eating disorder. This is only going up as time goes on and social media usage increases. Calories can be so triggering and can only encourage disordered eating and anxiety around food. Having calories on every meal on the menu is going to make eating out now even more of an anxiety-provoking experience for those that suffer than it was before. As a nutritionist, this is my major worry regarding this change.
–
Food should NOT be viewed as a number. It should be viewed as fuel and there to be enjoyed. Numbers will not educate us to make better choices all the time. They don’t tell us the true nutritional value of food… what about fibre? Vitamins? Minerals? You will never be able to see this from a number.
–
Obesity rates are rising with 28% of the UK are classified as ‘obese’. Now, yes, when trying to loose weight the general basis is calories in need to be less than calories out… However, often, higher calorie foods are more nutritionally dense than the lower calorie options. You’re far better focusing on nutritionally dense foods that nourish you and keep you fuller for longer rather than the lower calorie, less nutritious food that you’ll eat, not feel satisfied and consequently, more likely to snack throughout the day.
–
I would love to know your opinions on this new law coming in as it can be looked at in so many ways! It has good and bad issues attached to it, as many things do…

YOU CAN FOLLOW JESS FOR MORE TALKS ON HOT TOPICS HERE