Martyn Millard broke the Guinness World Record for the “Fastest half marathon dressed as a boxer” at our Victoria Park Half Marathon on 19th November – he finished in 1:35:17. Martyn tells us a little more about himself and the record attempt…. 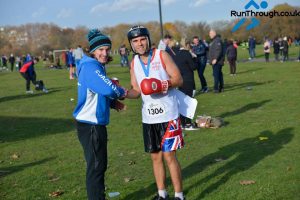 Why did you get into running?

I’ve run since I was a teenager. I mainly used to use it as a way of cross training for other sports like football with the odd 10k race thrown in to keep things interesting. It’s only in the last few years that I’ve treated it as its own sport where I can try to compete and improve my times or get better at different distances.

What’s your favourite thing about coming to a running event?

It depends what you want out of them. Races can be a grand finale, capping off a long training regime and giving you the opportunity to achieve a long standing goal. I also love how races can be used as excellent training runs where the intensity is upped, there’s no doubt everyone goes around that bit quicker when they’re racing as opposed to any old weekend run. Races are also a brilliant collective of people all attempting the same thing, leading to a brilliant sense of camaraderie despite the individual nature of the sport. 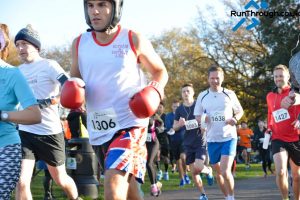 Why did you decide to go for a World Record?

I remember looking at the Guinness World Record annuals as a kid and thinking how cool it would be to be in it one day. It’s just something I’ve done to look back on later in life and have a laugh about it more than anything. Always had a bit of an obsession with bucket lists and this seemed like something different I could add to it.

What made you choose running as a boxer?

I was trying to find random running records I’d have a chance of beating and stumbled across it. I used to box a bit so thought it would be a good little combination of two sports I have a great love for. 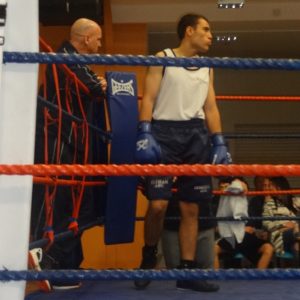 If you could give one tip to someone wanting to get into running what would it be?

Just do it! No equipment needed, no special facility, no need to join a team and its something you will see improvements in almost immediately, or to get down to a Runthrough race! 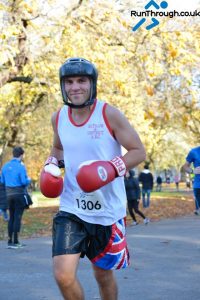