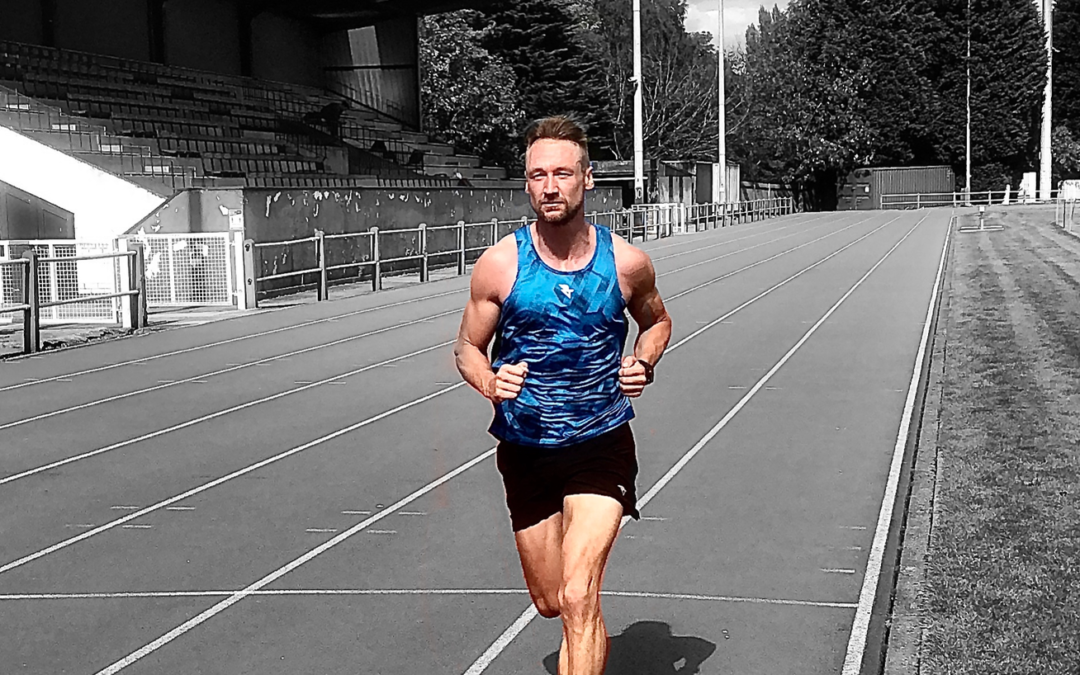 What does running mean to you, and how did you get into running?

It’s not just kept me physically healthy, exercise has had a huge impact on my mental health over the years and also driven me to develop ambitions, motivation and commitment. I grew up from a baby seeing my dad and uncle running. My dad was an age group world 1500m record holder, a national cross and 1500m track champ, my uncle was a 28 min 10k, 62 Half and 2-12 marathon runner (World Champ Team Bronze medallist) and my brother was Northern 800m age group champ, so it’s always been in the family. I medalled in the national championships at 15 but didn’t win my first “big” title until I was 18 when I won the 1500m Northern Championships. For the next 4 years I took athletics pretty seriously, on a scholarship at Loughborough whilst representing England on four occasions and, for a short time, being ranked in the top 10 under 20s in the world for 800m.
After Uni, running took more of a back seat as I moved to London and got stuck into Unilever’s Finance Graduate Scheme, where I used running and fitness more for the mental benefits of keeping active. To me, these are probably more important than anything else associated with running. I can’t imagine where my mental state of mind would be without exercise!

When did you start with RunThrough, what is your role?

I had just qualified as an accountant in 2013 and had been living in Switzerland when the concept of RunThrough originated. I still loved running and fitness but found myself absorbed in work and study. I didn’t hate my job by any means, but wanted some other distractions in my life to work. I was reasonably entrepreneurial at uni and had my hand in a load of different things. I guess it was always inevitable that I would eventually do my own thing when the time was right. I knew Matt from running at Loughborough and competing (beating him) in the younger age groups. He had just returned from Australia and was looking for something to get into so I said to him let’s organise a 10k run. I always saw Matt as great with people (me less so) and the corporate life was never going to suit him so we seemed like a good fit.
We did our first event at Bushy Park and enjoyed it enough to do a few more, so it went from there. It took us 3 extra years and 60 more events before I packed in Finance and we brought our first employee to RunThrough, so before that I had pretty much done any role within RunThrough imaginable. Now my role is to make sure that we keep growing as an event company in line with the original vision and also constantly explore new opportunities for the brand, like our new running Kit clothing line. I recently moved back to Manchester from London in order to grow RunThrough in the north where we are currently much lower key than in London. We have some amazing new events in the north for 2021 such as the Altrincham 10k and the Warrington Running Festival, so I’m excited for what’s to come.

What do you love about RunThrough?

I love seeing new runners take up running, so RunThrough allows me to live the dream! I’m constantly thinking about new ideas and concepts on how I can bring running and exercise to more people’s lives, whether it’s through new running events or, more recently, new running kit as well. When it all comes together on an event day and I see runners hugging friends over the finish line or when I see someone running past in a RunThrough Kit top, it’s a great and inspiring feeling.
We’ve had over half a million sign ups to a RunThrough event since 2013 and I’d like to think that a chunk of these were new to running and dragged to a RunThrough event from a friend who loved what we were doing and was once new to running as well.

What is your favourite RunThrough event, and why?

The Hampton Court Palace Half Marathon is my favourite event because this was our first big event that put RunThrough on the map. I took a long lunch from work and shot over to Hampton Court in 2014 in an attempt to convince the events team at the palace that this two man team (at the time just me and Matt) could smash a half marathon at one of the UK’s most prestigious venues. The start and finish lines are probably the most iconic of any race in the UK with 3,000 runners lining up in our first ‘massive’ race.
From that day things got serious for RunThrough, so I’ll always love that race despite the memories of sheer dread, stress and anxiety of what we had bitten off. It certainly made me feel alive.

What 3 top tips would you give runners, that you have learnt over the years…

1 – You can’t beat fatigue without rest, so don’t push harder for results when it’s the over training that’s making you struggle

2 – Set race goals and targets. Motivation comes much easier when there’s something specific to think and dream about when training

3 – Always include a weekly interval session. The results from interval training are insane!

What would you say to anyone coming to an event for the first time?

Be careful in the first 1km. If you’ve never raced before you have no idea what the excitement and adrenaline can do to your perception of the speed you’ll go off at! Go out easy, finish strong and enjoy the experience. The idea is that you enjoy it and fancy going through it all over again. It will be the first of many, so you don’t need to run within an inch of your life first time out!

What is your proudest moment?

Seeing 5,000 runners cross the start line at the London Half in 2019 was my proudest moment within RunThrough. I’d been chipping away for years at the idea of a mass participation half marathon that closed the roads around the Olympic Park and Westfields. It took me 6 years to get this event signed off, more than double the time of any other event, mainly because it was such a complex idea with the route, closures and stakeholders involved! When it all came together and I heard the gun go, I felt super proud that I had stuck with this unrealistic ambition and we had eventually pulled it off!

What are your current running/sporting goals?

My running/fitness goals change all the time! I spent a big chunk of my life fully focussed on running which has been great and shaped me massively, but more recently I’ve been introducing new fitness challenges into my agenda. I’m spending a lot more time in the gym, playing more golf and even had my first boxing fight scheduled before COVID kicked in. I’d like to get into climbing and over the next few years spend more time hiking in the mountains around the world whilst having a Stella on the top (I’ll take my drone).

The year before RunThrough was created I was living in Zurich in Switzerland. During this time, my team at work entered a relay team into the Zurich Marathon where I ran a 8/9 mile leg. This was the first time in my whole life that I had competitively ran further than a 10k having despised the longer distances up until this point (and probably at this point and forever after as well).
To see what Ben’s up to give him a follow on Instagram, @ben.ontherun