My name is Anthony and this is my story

On 3rd April 1996 I was diagnosed with a benign Astrosytoma brain tumour and had to undergo a craniotomy to remove it. I was six years old at the time. Post surgery a few months later it became evident that I had suffered a stroke during surgery which resulted in a left sided hemi-plegia and left sided field defect. At the hospital doctors noticed my face had drooped on one side and I couldn’t clench my fist or walk on my left leg.

This meant that I lost the use of my left side and I had to learn to carry out everyday tasks with just one hand. My visual field was also affected and we realised I cannot see objects on my left side either. My Vision is very much alike to a horse in a race that has blinkers over their face, so my vision entails me to move my head in order to see (tunnel vision). 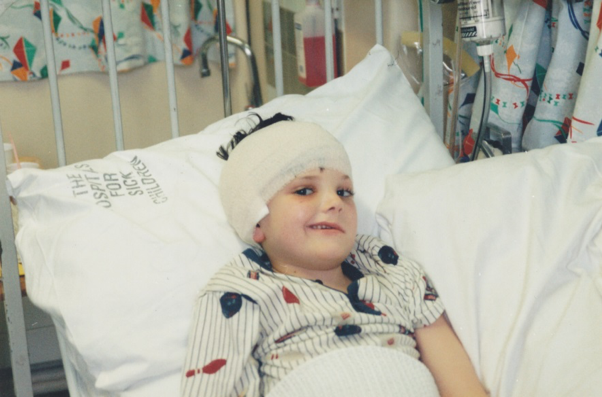 I went from being a happy, energetic sporty child to the total opposite. I remember feeling confused and upset as I struggled to make sense as to what was happening to my body. After months of intensive physiotherapy, I eventually returned to school, but everything felt alien to me. I was unable to run around or keep up with my friends, and teachers were also fussing over me, insisting that I needed help and support which I personally hated. At lunch times I was not allowed to go out and play for fear of banging my head.

I would sit at the window staring out watching all my friends playing football and wishing I could be out there too! Part of me wished that I hadn’t survived the operation as everything became too hard to bear. But with support from school, family and friends, I gained in strength and slowly my confidence started to return.

One of my strengths is my resilience in life and quitting is not an option: I never give up believing. When I turned 18, I developed an interest in running and competed in 100m & 200m in competitions around the country. I was then invited to compete at the London Olympic stadium for the Paralympic trials but unfortunately finished just outside of qualification for 2012. 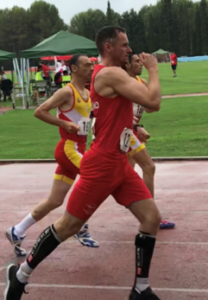 My running coach encouraged me to consider longer distances such as 800m & 1500m, which at the time felt like a million miles to me, but I gave it a go. At the beginning, it was extremely hard on the body but I persevered and eventually my times increased. In 2015 my biggest achievement was being selected to represent England in the Cerebral Palsy World games and won 2 gold medals. I was pretty nervous before the race but new I had to just give it everything I had! I had put in the hard training and just had to believe in myself. I ended up running 2 huge PBs in those races knocking off 4 seconds on my 800m time finishing with 2:40 & in the 1500m knocking off 8 seconds! Finishing with 5:50. The feeling after those races and smashing huge PBs is probably one of the best feelings I have ever felt! You are on such a high! This was by far beyond what I thought I could ever achieve.

After the World Games I had this new sense of belief in myself and thought can I push myself further!? Can I get that amazing buzzing feeling again! I looked up running races around London and came across RunThrough.co.uk with lots of great running challenges and rewards. I decided to enter, and it was great! Not only are there great running challenges but they are held in the most scenic parts of London! The best thing about RunThrough events is not just the running, it’s the spectators and the organisers, the volunteers who are always very supportive and encourage every person taking part in the race, cheering you on to keep on going! At present I have entered 5k & 10k runs with Run Through. My 5k PB went down to 21:14 and 10k to 48:18.

Even though I am normally the only runner with a physical disability I am always made to feel very welcome even from other runners cheering me on as we run along during the race. I hope to be a role model to others to motivate & inspire others to do and achieve more too! Because IF I CAN DO IT ANYONE CAN!

I now document my training in the gym and on the track via Instagram, Facebook & more recently YouTube. I hope it will inspire people to give running a go!  My message is that no matter what your disability may be, reach out and find your true potential.

If you want to follow my journey then please feel free to check out and follow on: