‘It’s Just A Change In Me, Something In My Liberty’ –
RunThrough Media City 5k

The sun yawned in contentment as it trickled its rays across Salford Quays. Thursday’s blissfully balmy temperatures drifted into the early evening with shimmering joy. 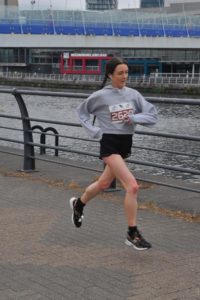 Salford’s quirky skyline smiled down at me as I ran along the quayside, my footsteps falling into perfect harmony.
I had been looking forward to attending the RunThrough Media City 5/10k event for months.

The Verve’s Lucky Man meandered out through my headphones. My go-to running playlist usually consists of Sandstorm by DaRude, Galvanise by The Chemical Brothers, and Anaconda by Nicki Minaj (got to have some sass in there!). Lucky Man isn’t a song I’d usually exercise to or associate with fierce motivation, but on this evening, it just felt so fitting.

Even ‘lucky’ felt too flimsy a word to sum up how I felt at that precise moment, in the midst of the beating heart of the run.

When anorexia first came into my life seven years ago, I loathed running. It was quite simply just another tool I used to torture my own body with.

I’d feverishly add up every last calorie I’d consumed in a day and then run until I had burned double that amount.
I ran because it was the only thing I had control over, as my existence was rendered to greyscale before my very eyes.
I ran because I believed my body deserved the pain of shin splits and wincing bones.
I ran because I wanted to flee from anorexia’s booming voice. But no matter how far or fast I ran, it always caught up with me, pinning me to the floor and laughing in my face.

Anorexia tightened its grip and ensured that I put my new routine and obsession before my family, friends, work, health and sheer sanity.
My life was a suffocating daily whirlwind of minimal calories and over-exercising. At my lowest point, I was so weak I had to climb the stairs on my hands and knees.

In 2015, I moved abroad to kick-start my road to recovery, and my rocky relationship with running dwindled as I was forced to heal my aching body and soul one excruciating step at a time.

It was only after my relapse in 2019 that my running made a comeback.

Everybody around me held their breath in worried anticipation as I invested in a new pair of running shoes and embarked upon my old habits.
But this time, something had changed. I no longer ran purely to burn calories, and started to become inquisitive about different distances and times. I removed the calorie count from my tracker and focused more on clocking up the miles. I found unexpected fun in striving for new personal bests as week by week my body flourished and strengthened.

I relaxed my white-knuckled grasp on my anorexia-infused need for control and allowed my body to become my biggest teacher.
I began to work alongside my body instead of against it. In turn, the colours of my world started to return, slowly but surely.
No longer running blind, my eyes once again opened to the wonder of the life that I had all but given up on.

There is no feeling comparable to crossing that finishing line, knowing that you have given it your all.

My body pulsed with the heightened senses that can only come alongside a runner’s high.
21 minutes and 11 seconds: my personal best!
A lovely gentleman whom I’d been parallel with for much of the course waited by the medal table to congratulate me. He told me he was 67 years old.
That’s what it’s all about: those moments. The moments of shared experience, of understanding, of knowing exactly who we are.
I was overcome with gratitude for the experience of the entire evening, for the inspirational people surrounding me, and for the satisfaction that absorbed me as I hung my medal around my neck.
Running is a community.
Running is freedom.
Running is escapism.
Running is pride.
Running is a way to honour our bodies, whatever the story behind them. 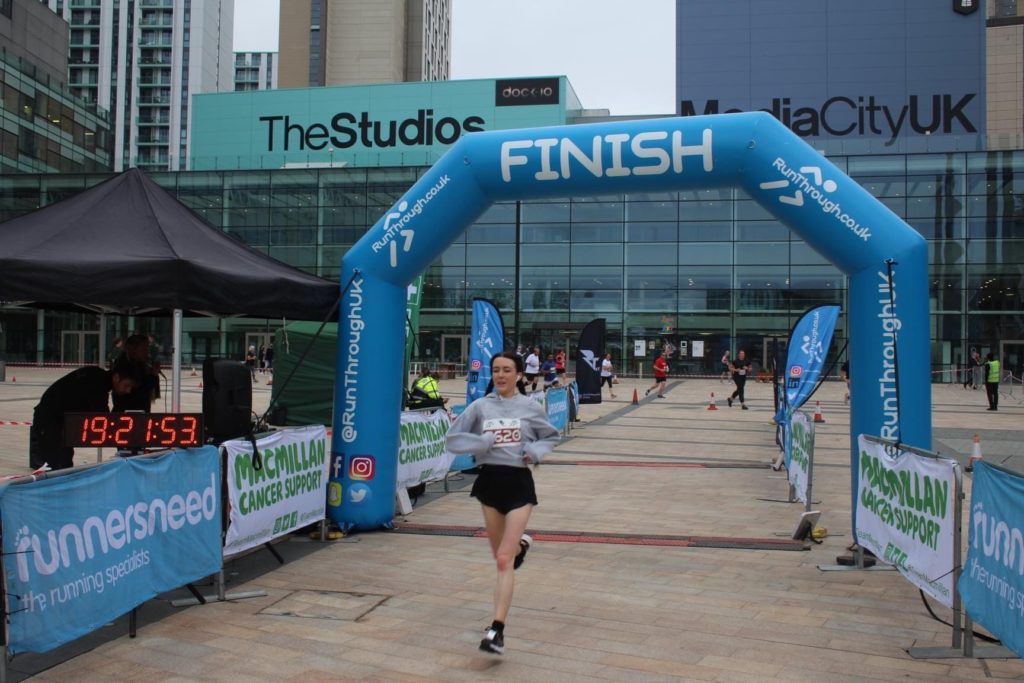 Running was one of the key ingredients in the recipe that saved my life. I honestly can’t put into words the euphoria I feel when I run nowadays.

I don’t know if I’ll ever be totally free of anorexia, but what I do know is that every day, I feel so incredibly blessed to be given the opportunity to run – to get out there and do something I enjoy; something that showcases the unbelievable force of the human body.

Running reminds me that I am alive, and to me nothing symbolises life more than a body that has overcome adversity against all the odds.

“It’s just a change in me, something in my liberty…” – The Verve