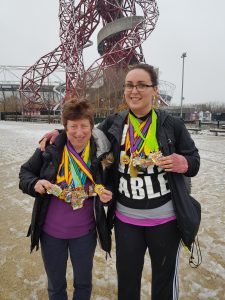 My name is Catherine Altmeyer and 57 years ago I arrived in this world as a 3lbs baby born at home and began my fight for life. I joined two brothers and as a big sister two others followed. As a child I did struggle with shyness and this at times was so chronic I hid at school lunch times to avoid social contact. My brothers were high achievers but I struggled fitting into this category. In 1979 at 18 I decided I would follow my brothers and work abroad. I worked in a Swiss Hotel as a waitress and that is where my life changed. At the end of the season there was only myself and the chef who stayed to complete the season. This French, Alsacienne Chef was my constant companion from then on and in 1982 we married.

I had a successful career as a Catering Manager but I still felt something was missing. I had been told I couldn’t have children but after 12 years of marriage two identical boys arrived as a little miracle. My world was perfect. I didn’t return to work until the boys were in secondary school so didn’t return to the pressurised position I was in previously, leading to once again insecurities as I really wanted to “run the joint”. My boys were active and healthy and very competitive. They worked and played hard and achieved both academically, musically and thrived on the sporting field.

Our world all changed in 2006 my partner of 27 years died of cancer only a few weeks after diagnosis.

Instead of crumbling we stayed strong, putting on a front and tried to stay as normal as possible. My 15 year old boys were amazing and took everything in their stride. They achieved excellent GCSE results all A’s in their A levels and both obtained great degrees at top Uni’s. They both now have excellent jobs and great career opportunities.

You may be thinking where does running come into my life, well in late December 2016 my Line Manager Elizabeth randomly said shall we run a 10k in January then one each month in 2017. We had run a few 5k park runs, but with little thought I agreed.  My mother was in the last few weeks of life so my mind was elsewhere, my only thought was she is crazy but then again why not!

We arrived at Brixton on 6th January 2017 extremely early but immediately felt the buzz of excitement. We were very self- conscious as everyone looked so fit, we did feel like a fish out of water but we followed the instructions and finally the countdown began and we were off.  I really don’t know how we completed the course including the long sleep hill at Brixton but we did and much quicker than the hour and a half we had set as our target. I cannot explain the pure joy of achievement that I felt when I crossed the finishing line. I couldn’t stop smiling for ages, the sense of deep satisfaction was really rather overwhelming.

We continued our monthly 10k’s sometimes adding an extra run in the month. I completed my challenge in the snow at the Olympic Park at the beginning of December. This was by far the most fun I had had on a run, running in the ridiculously treacherous conditions in the snow but who cared. It was the first race I can honestly say I really enjoyed!

My last race of the year was a 5k at the Lee Valley Velodrome and my twins joined me, although one pulled out the last minute due to illness. He came 6th in the race but was gutted it was 20 minutes …..  I wanted them to see why I put myself through such an effort each month and at the end one son described it perfectly – “you look so happy Mum”.

So why do I run, as every 10k is a physical challenge, one which I push myself each time…

As a lady of a certain age I need to  increase my physical fitness but for me it was to help also with my mental strength as I do  have moments of  “low” times. I seem to come alive outside and thrive in the competitive environment. I deal badly with crowds so avoid them at all cost, but once I start running the fear disappears. At the end of a race I am on cloud nine, so proud with the medal around my neck, able to conqueror my fears!

What is my aim for 2018? Of course 1 will run one 10k a month maybe two. I do need to work on my upper body and core strength as I look like a stuffed turkey when I run. I have set myself a target to run 1000k  in a year. Matt, one of the co-founders, spoke to Elizabeth and myself once and asked if we did much training. We answered, no. However I do ride 20k a day to work and walk a dog for an hour a day which all certainly helps me on the endurance of a 10k, but I do need to run throughout the month so I can enjoy each run.

I have to thank RunThrough as they are an exceptional company, they have opened running to the masses. Anyone and anything goes. They have given me the confidence to take a step forward to enjoying life again. I love the competition the excitement the friendliness and encouragement. This year I really feel I can move forward and looking to moving out of London for a new beginning. Finally I need to thank Elizabeth for supporting me through out 2017 attending all the races and giving me the motivation to complete the major challenge!