About 5 years ago I was diagnosed with cancer in the lungs. Thankfully it was a cancer which was treatable but unfortunately it started to spread. It was touch and go to begin with but the aggressive treatment i received managed to shrink the tumours until they were small enough to be removed. The operation was thankfully successful and I have been in remission ever since.
During this same period I had to have a left hip replacement….a metal hip!!  I was told by the surgeon I shouldn’t run but before I got ill I loved running.  I set myself a target to regain my fitness and while in hospital a goal to run the 2018 London Marathon and raise money for the cancer charity Children with Cancer UK.
After the hip replacement I only had a few months in which to strengthen the leg and train.  When I eventually started my training I struggled to run 20mins on a treadmill!! Anyway I persevered and by some miracle completed the hottest Marathon on record and raised just over £2000 for the charity! I got the marathon bug and ran the 2019 London marathon for the same charity raising £2,500!!
I was then nominated by the charity to run in a bell costume in 2020. You ring the bell when you finish cancer treatment as a form of celebration. But with the lock down it was replaced by the Virtual London Marathon which I completed running around the Battersea Park.  Again by some miracle I raised over £3000!! 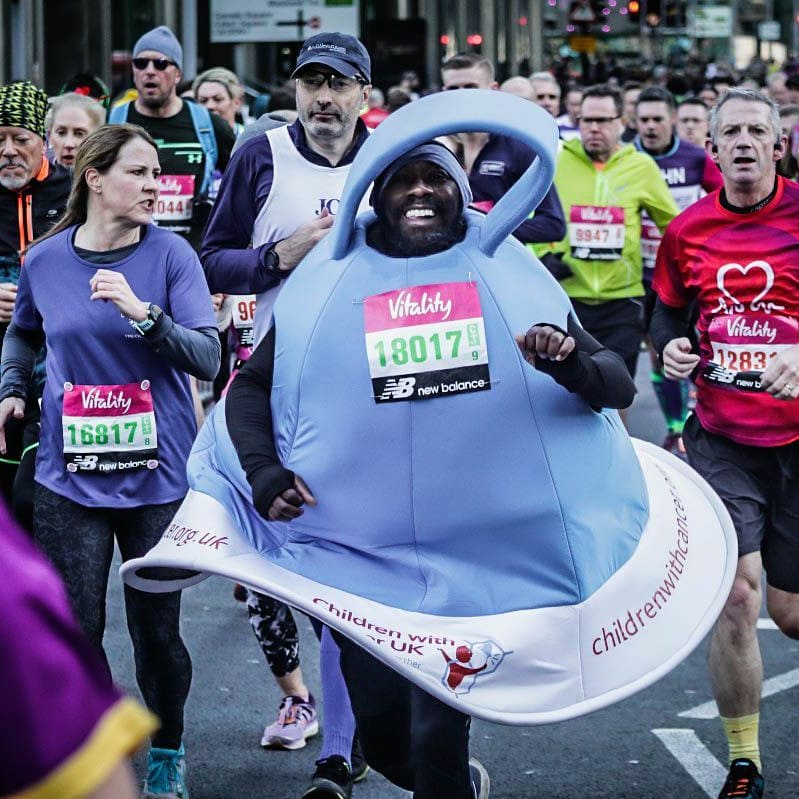 I went into depression after my cancer treatment but running gave me a focus and saved me mentally!
Unfortunately at the start of the pandemic my Dad passed away…a huge loss!! To help me through this period I took part in the David Goggins 4x4x48 challenge running 4 miles, every 4 hours over 48 hours!! I completed this challenge inspiring others to run with me and at the same time I raised over £800 for Blackmen and Blackwomen Rising a cancer charity which supports men, women and children in the BAME community going through cancer.  Again running saved me!!
I am so lucky to be alive! Running has helped me to explore new places, and meet new people.  It saved me both physically and mentally.  It’s given me a sense of freedom and an appreciation of nature and my surroundings.  This has inspired my next running adventure. In 2023 I will take some time out and run the Marathon Des Sables regarded as one of the toughest running events in the world!!

I believe God has given me a second chance in life! He has given me a gift to keep going when most would stop even with damaged lungs and a metal hip!!! Through running I will inspire and raise cancer awareness…the journey continues!!