Parenting, motivation and how I keep running…

I took up running again in 2015 having not run since school and enjoyed a few successes along the way: sub 20 5K, sub 40 10k, 03:13:59 at my first marathon in Manchester, cross county and track and field. However this meant dedicating a lot of my spare time to racing and training. However at the beginning of 2017 I developed a stress fracture and sidelined me which healed but plain laziness and the excuse of my wife being pregnant “what’s the point, I just won’t have the time once the baby is here!”  for not going out to run. 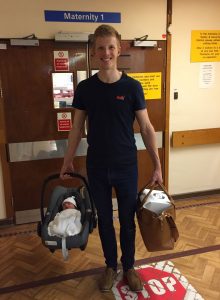 On the 12th July 2017 our dream of becoming parents came true and Hugo was born. Any parent will know what the first few weeks are like, but after a while we found our groove and funnily enough there was a bit of time to go for a run. Even with very little sleep some nights I  managed to put a few miles in and my fitness started to return faster than I thought it would and so I really wanted to share my journey.

There are hundreds of running related Instagram accounts but I wanted to prove that you can be a great parent and run too. I set up @runningdad to prove a point and have been sharing my journey ever since. It has been fantastic to network with runners of all shapes, sizes, paces, ages and other parents too. The support and inspiration has been immeasurable – can’t think of another sport like it where there is such community!

Now don’t get me wrong it hasn’t all been plain sailing and there have been days where running was the last thing I wanted to do. But the one thing that keeps me motivated and gets me out the door when I’m tired, it’s cold, it’s wet, it’s dark etc etc is a goal but also a plan.

A goal for me is a focus/destination and after a bit of bumbling around in the Autumn without a real goal, what should drop through the letterbox but a ‘you’re in’ magazine for London 2018, new goal – check! I’ve read a lot about goal setting and the S.M.A.R.T (specific, measureable, achievable, realistic and time based) method has always worked well for me, Manchester was the perfect example of S.M.A.R.T goal in action. My goal was 03:15:00 based on my current 10k time (specific, achievable, realistic), I followed an 18 week training plan (time based) and was over the moon to complete it in 03:13:59 (measurable). 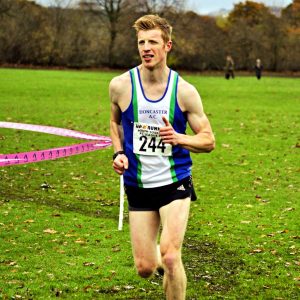 Now if the goal is the destination, the plan is the map to get there. For some reason when I have a plan it makes finding the motivation to complete the task *almost effortless (ask me that on a cold January morning you may get a different response!!). When that nagging voice says “you don’t really want to go for a run, it’s cold/wet and it will be much better to stay at home warm and dry” my response goes something like “actually you’re wrong, the plan says I have a 10mile run this morning and I have absolutely no choice but to go and do it”.

If the plan does fail to get me out the door, I have a back up. Say if the run is 6miles and the plan is in danger of being overridden by a cheeky lie-in. I make an agreement with the voice in my head that we will run a mile and if we still can’t be bothered then we turn back – haven’t turned back yet!!

Now following and sticking to a plan, especially one for a marathon does bring about feelings of guilt as a parent. However I try to minimise the impact of my running by running at unsociable times say before he wakes or after he goes to bed. What does help is having an incredibly supportive wife. Also the plan lives on the fridge so we can all see it and know what I’m doing where an when which seems to work pretty well – also giving me that extra accountability when I feel like a run is the last thing on my mind. 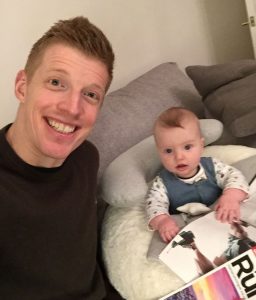 No matter what type of runner you are it is important to have a focus and a plan, especially as a parent, as I guarantee there will be far more times you ‘just don’t feel like running’. However it is about striking the balance between family life and running, so the plan or goal will have to be realistic. This in turn will keep you motivated and running during the trials and tribulations of parenthood – Good Luck!!