My name is Donna and I am 46 and I have never enjoyed exercise or running in my life!
Rewind to the summer of 2017.  An old school friend got in touch as she had moved to London and wanted to hook up. From then on it was one long booze session. Out every weekend and nursing a serious hangover on a Sunday morning, which would last all day. My job as a trade union representative also meant I was in the pub most nights of the week too. Although I was enjoying life and having fun, my drinking was getting out of hand and my weight ballooned and I quite literally began to resemble a balloon.
New year approached and a heavy night of drinking was planned to celebrate. New Year’s Day went by in a blur. The hangover was immense. I received a text from my old school friend asking for my email address and I gave it willingly not knowing what it was for and where it would lead… ” I’ve booked us in for a 5k run” she said. ” I’ve ordered you a t-shirt too” she offered as an olive branch. “Why?” I asked. “I’ve never run in my life before“, “It’s to stop us drinking this month. I thought it’d be fun“.
And this is where my running story begins! 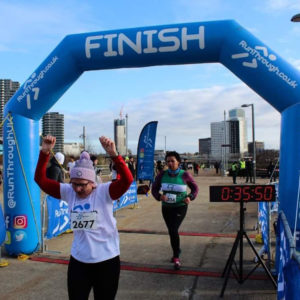 We set out on a cold, wet Sunday morning and hit the ground running (if you pardon the pun). We just ran, and walked, and ran, and walked until we had done 5k. It took 47 minutes and it absolutely killed me, all I wanted was a beer! Over the next few weeks I got out there running, walking my way to a 5k until my body started to get used to it. As it was January the weather was cold but I made myself get out there. The morning of the race came round, Sunday at the Olympic park. I was nervous and excited. I also couldn’t believe I was up so early on a Sunday morning without a hangover. We arrived at the Olympic park and the atmosphere was buzzing. I collected my bib and chip and got ready to set off. I was aiming for 40 minutes and just to get around the course really. I only went and managed to get a personal best of 37 minutes. And that was it, I was hooked.
I arrived home on a high determined to book in for another and beat my time.  I trained hard but was still drinking, week nights and weekends but as I trained more I began to realise that I couldn’t run so well the next day. I booked a Chase the Sun at the Olympic park in April and really wanted to get another PB. Over the Easter holiday I went away to Glasgow and even went for a run whilst in Scotland. Unfortunately I came down with laryngitis and became really ill. I was unable to run in the race and was so disappointed but I was not going to let this get me down. Booked the next Chase the Sun in May and again I smashed a PB! I was obviously chuffed and thought, ok I’m gonna go for 10k next time. As we are all aware the summer of 2018 was a scorcher and training was hard but I was getting up early and hitting the streets at 5.30am to train. I was booked in for Lee Valley VeloPark in June.
Race day came and it was hot. Too hot. I struggled with this race. Six laps around a hilly course and it beat me. I collapsed over that finish line and went for a cocktail. This race put me off. I stopped running for a few months and hit the alcohol, hard, for the summer. Although I still went out my heart wasn’t really in it. The turning point came in September. I was drinking so hard that I started to black out while out. Waking up at home, in bed, not knowing how I got home or what I had done the night before.  This happened a few times and I began to realise that my drinking was becoming a problem. So what did I do? I turned to RunThrough. I knew that running was the only way to curb my drinking. 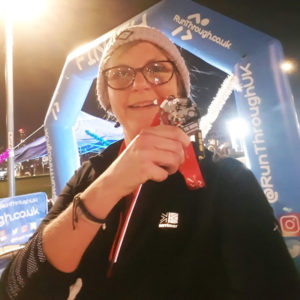 It was October and I went in the site a saw the Chase the Moon in December at the Olympic park and I wanted the medal set. So I put on my runners and off I went. Training hard as I wanted that medal. Out 3 times a week no matter the weather. I was going to get a PB and a new medal. And that’s what I did. A PB at the Olympic park, again. I was a little addicted to the buzz of a PB and the medals. They are so pretty and shiny. I wanted a new one!!
Christmas was a turning point in my life. My cousin passed away. He was a few years older than me and lived a very healthy life. It was unexpected and sudden. It broke my heart. At his funeral I found out he was patron of the Freddie Farmer Foundation, a charity that helps children with cerebal palsy. At the wake I got drunk and told the charity that I would run a half marathon a raise money for their charity in memory of my cousin! When I woke the next day, head banging, I remembered what I signed myself up to and thought “oopppsss!” But that was it, I’d said it so had to go through with it. 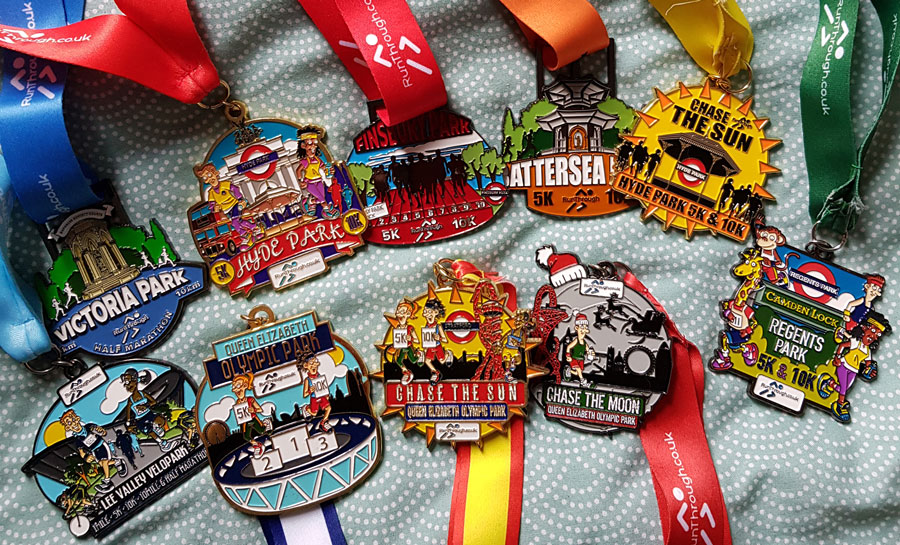 Since then I have run a RunThrough event every month, determined to smash the Royal Parks half marathon in October in memory of my cousin. I have run Victoria park and Hyde park 5k. Finsbury Park and Regent’s Park 10k and Hyde park Chase the Sun 5k. Each time I smashed my personal best and got that medal. I am booked in for Victoria park Chase the Sun 10k next month. Hoping to get a PB of an hour there. I will then begin my training for the half marathon by increasing my distance over time. I will still be booking those races as they keep me focused and as I have mentioned many times, I love the medals. My drinking is under control, in fact I never drink during the week and only have a couple on the weekends. I put this down to running and having RunThrough in my life. I am a member of the chat group on Facebook and it’s a really friendly place to get advice and give support!
Thank you RunThrough for being in my life.