Back in April 2017 I made the decision that enough was enough and needed to lose weight that dread 40 was looming and I was due to turn 40 in December 2018 and I vowed not to be “fat and 40” this was always my moto when I decided to support my stepson and join him at Weight Watchers as moral support to hopefully lose a little weight myself and be with him to support him as well with weight watchers not ordinarily being a male driven thing.

I topped the scales in April 2017 at 12 stone 6.5lbs I was absolutely mortified and I knew things had to change see below image of me in my beloved Chelsea Kit that was taken at the start of my journey.

I spent the next 6 months sticking to an eating plan. Even with days out I packed food to take with me and holidays I made sure I made wise choices and started to discover within this period exercise and that it could be enjoyable.

My running really started like most in a garage on a treadmill doing walking and running. I could only manage a programme of 20 mins which incorporated 4 minutes of walking to warm up with 45 second intervals of walking and running throughout the remaining time, so I was only running and walking for 12 mins and I don’t mind saying this absolutely destroyed me. Some days I said I cant do this anymore, I can’t be bothered tonight, I’ll do it tomorrow, as those little devils tell you that sit on your right shoulder. I didn’t listen, I pushed on and did it and listened to my ever so supportive wife Alison who has always stood by me through everything I have done and helped me as much as she could along the way! 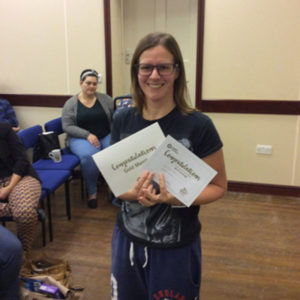 September 2017 I hit my goal weight! Still continuing to work on the treadmill for exercise, so no outdoor runs had been done at this stage, and I had lost 3 stone in 6 months dropping from 12 stone 6.5LBS to 9 stone 6.5LBS.

My running outdoors and discovering that I could run without stopping didn’t start until September 2017 when I was convinced by my wife – “come on lets go for a run, lets just go slow and do a steady route not far and see how you go”. That was not music to my ears at all, I went into automatic panic. Alison has always been predominantly more active and fitter than me and has previously done running whereas I hadn’t run since school for the cross county school team, and to be honest I was not good and my moto always was I cannot and will not run just no way.

September the 10th 2017 we went out for a run and we ran 1.80 miles and it took me just over 35 mins but I did it and I ran the entire 1.8 miles without stopping. It hurt like hell and I ached so much the next few days but I did it and the journey of running began from there. I can honestly say I don’t look back, well only to look at my own journey and how far I have come. It’s crazy to think where I have come from and what I do now and sometimes I have to pinch myself to make sure it’s not dream!

November 2017 we entered into our first Half Marathon by which point me and Alison had never run a 10K so to enter a Half Marathon was unthinkable but we did and were due to run the Manchester Half Marathon in May 2018. It was in aid of a friends mum who had lost her battle with cancer. As Alison works for Royal Mail, as you can imagine, she works 6 days a week and walks 13 miles a day, training together was sometimes hard so mostly I took to running alone. This was hard. I called myself a “Couch Potato” but I pushed myself and did it, I made myself do it as I knew I needed to achieve something. My dad once told me, after watching my sister complete a half marathon, that “you’ll never be able to do that”. So, me being me and as determined as I am, wanted to do this to prove him wrong!

…and we did!! We completed our first Half Marathon in record time and under the 2 hour mark as well, which we were so pleased with and even brought me to tears when I crossed that finish line and I have never looked back from that moment.

I then went onto complete Nottingham 10K August 2018, Leicester Half Marathon in October 2018, Edinburgh Half in May 2019 and The Great North Run in September 2019. Further to the picture below this is me now at Run Silverstone 10K completed in record time well under 50 mins. Alison said to me “god you were on a mission weren’t you” which made me smile and also showed me how far on my running journey I had progressed, in a matter of just over 2 years, self-taught and self disciplined.

I’ll be honest we both said it and I certainly said it I’ll never run a full marathon, never, that’s just too big, so what did we do (not my idea)… Alison said shall we enter a full marathon. It was discussed Christmas 2019 and so we did, we entered the Bedford Autodrome Full Marathon. Unfortunately, due to the COVID-19 this event was cancelled, but the training and the long runs leading up to this we completed a 20 miler on New Years Day 2020 and felt great. We went on to do a further 20 miler in February and seemed better still. So we set out to do the full marathon virtually on Saturday 21st March 2020, and we did it just under 5 hours which we were so impressed with as we ran this in and around our local area. As you can imagine it’s not the same as running around a flat race circuit 8 times and again we accomplished something we said we never would, well certainly I never would!! 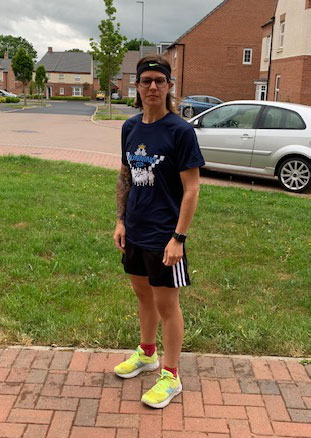 I suppose the moral of my journey / running experience and how I have come to where I am as currently I sit on Furlough due to COVID-19 I run nearly every day and sometimes I ask myself how do I do this. I always find running first thing in morning works best for me, both mentally and physically and sets me up for the day and helps me mostly mentally at the moment.

I use social media a lot for my running and I use a weight watchers connect group for running. People ask me questions and tell me they’d like to run to the speeds I do and the distances I do. I tell them if I can, anyone can, and if you want something that much anything is achievable in life. Running is everything to me and I never thought I’d hear myself say that but I couldn’t imagine my / our lives without it in it!

The is me now running in Furlough from the 6th April 2020 and running nearly every day of the week and now weighing 8 stone 5 over a stone lighter and starting to get leaner from when I hit my goal in 2017 where it all kicked off my running journey.