When I was told I had a hole in my heart at age 21, that was just the beginning of what would end up being a journey that has completely changed my life. In the two years following my diagnosis, my health continued to deteriorate and I ended up needing open heart surgery at the Royal Brompton Hospital on January 29th 2015, aged 23. Not realising how unwell I was, I had ambitiously signed up and gained a ballot entry place into the London Marathon exactly a week before I was told this – which they then said would be risking my life to even attempt! So I withdrew and deferred my place from the marathon and life was put on hold while I waited to have surgery.

After heart surgery I had to learn to breathe, walk and talk again after having my sternum cut in half, I couldn’t even sit up by myself for the first few months and it took a year for me to recover. With support from my family, friends and Cardiac Athletes community alongside help from my local cardiac rehab, I gradually started running again and signed back up to the London Marathon, even though at this point I could only run for 10 seconds at a time. 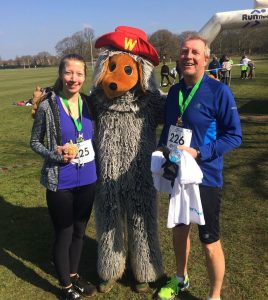 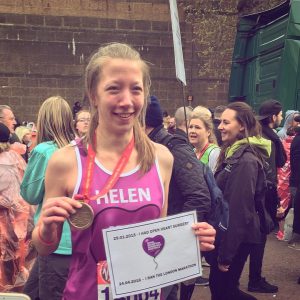 During my recovery I discovered RunThrough, where my Dad and I took part in several 10k races to mark my post-op progress and to help me train for the marathon. We used the run/walk/run approach with interval timing which was helpful at keeping a good pace and not overdoing it as it was pretty nerve wracking allowing my pulse to increase too much after major heart surgery. We completed RunThrough’s Wimbledon Common half marathon in March 2016, my Dad’s first half marathon in over 30 years and my first ever half! In April 2016 I managed to run the London Marathon in 5 hours 32 mins for the Royal Brompton and I loved every single minute of it – I finally knew what it felt like to run with a ‘normal heart’ and it is still to this day one of my proudest achievements.

Sadly, the marathon high didn’t last long as within a few months I started struggling to walk. I put this down to running, as leg cramps on exertion were (I thought) common signs of pulled muscles. However, the cramping never went away and I was promptly sent by my doctor to King’s College Hospital where I was immediately admitted. I had suffered an ‘embolic shower’ and was diagnosed with a very serious limb-threatening condition called Acute Limb Ischaemia, where my heart had pumped out blood clots around my body that had damaged several organs and blocked the main arteries in both of my legs.

From that moment things spiralled into what would end up being the worst few weeks of my life – 4 emergency surgeries, 5 days in Critical Care, learning to walk again, and then being sent home after 19 days with a walking stick, a sack of horrible medication, more outpatient appointments than I could count and a feeling of despair that my life would never be the same again. 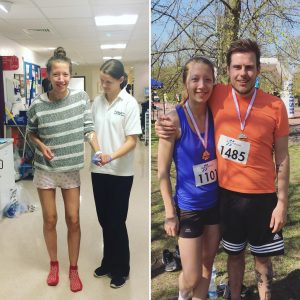 When I was in hospital I made a promise to my nurses that I would run a 10k race to raise money and thank them for looking after me, as at that point running a 10k was the equivalent of running a marathon when my legs were numb, dead weights that I couldn’t move without dragging off my bed. That promise became my motivation throughout my entire recovery, and after a LOT of hard work I finally ran my first post-op 10k on a beautiful sunny day at Greenwich Park with RunThrough in April 2017, just 4 months after leaving hospital.

I must admit the mental recovery has been far tougher than the physical recovery and it is still something I struggle to come to terms with. As it did after heart surgery, running has helped me clear my mind on bad days, even though I am constantly reminded of what I have been through by the physical challenges I face when I run (such as the painful aches of damaged arteries and my legs feeling like they are filled with cement). However, being outside and still ABLE to run, no matter how slowly, fills me with gratitude – I am still here, with both of my legs and a patched up heart, and I’m not going to give up any time soon!

My wonderful boyfriend Russ started running events with me to support me during my recovery, and has joined me at every single race since. This year we are doing a fundraising challenge of running 19 races for the 19 days I was in hospital, raising money towards building a new Critical Care Unit at King’s College Hospital. I may not be able to run marathons again just yet (I am hopeful that I will be cleared to run London again one day) so in the mean time I am doing the best I physically can given my circumstances. Recognising the amazing work the NHS does and giving back to the people who have given so much to me has been an extremely important priority during both of my recoveries. Without King’s I may not be lucky enough to still have legs to run with, so I am making sure I put them to good use!

Lastly, I just wanted to say a huge thank you to the entire RunThrough team for everything that you do for the running community, and to Matt for always cheering us on! Your events have given me goals to focus on throughout both of my recoveries, so thank you to everyone who works towards making them happen.