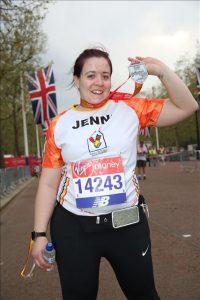 Ever done something on a whim? Then after you’ve done it you think, blimey why did I do that? Well that was me in April 2017. Something came up on my Instagram feed about the marathon, I looked it up, loved the pictures on the website and on a whim with barely any running experience entered the ballot for the 2018 London Marathon.

October arrived and one lunch time at work I was checking my emails, there to my horror was an email informing me I had won a provisional place in the London Marathon 2018. Me! Not a professional runner, a once a week gym goer, who had gained a place in one of the most famous prestigious running events in the world! I didn’t want to believe it, I read and re-read the email several hundred times, and then sure enough on the doormat at home was the confirmation letter and magazine stating the words: ‘You’re in!’.

Now what? Not only was my family in shock, I was….I nervously flicked through the magazine, it terrified me. Training runs and training programmes, health and nutrition, preparing for the big day-what had I signed up to? Moreover was I up to this enormous task? I had this horrific sinking feeling but at the same time I felt excited. I was going to commit to this. I was going to do it.

Training seemed easy at first, I quickly racked up the miles, 2,3,4 and by December I was running nearly 10 miles! I felt good, I felt I could maybe finish the marathon. My gym visits increased, and I had a few sessions on the treadmill, that was hard, you’re alone with your music with the same view for sometimes 2 hours – it’s much nicer outside.

I was eating better, keeping hydrated and friends around me said they could see the difference in my persona and weight loss, it felt good. I carried on training, upping the miles each week by 1 or 2. My pace was improving per mile too, although this wasn’t important I just had the goal to finish! By February I hit a wall, the weather was horrendous, all that snow really made it hard to run and I couldn’t get past 15 miles – I really struggled, I was down and miserable and began to doubt I could do it.

When the weather finally brightened up for a few days I made it out for my longest distance of 19 miles just a few weeks before the marathon. In those last few weeks the nerves really set in, it was all I could think about, I was terrified. I had booked my hotel, I’d run and run, lost toenails, blistered and chub rubbed…was I ready?

The week before the marathon I’d spent hours studying all the pre-marathon paperwork, I’d planned for the expo, I’d tapered down my runs as advised-not much else I could do. The expo was fun, everyone was friendly and the atmosphere was a just a small taste of what was to come, but on the train home with just my thoughts it dawned on me what I was about to embark on. I was terrified, all of my fellow runners looked lean and sporty, and I felt like I stuck out like a sore thumb.

The evening before I couldn’t sleep, I tossed and turned and worried. The advise to get a good night’s sleep and go to bed early is definitely easier said than done! I laid my kit out, everything was ready except me.

The morning of the marathon arrived, I was so nervous I couldn’t eat, I forced myself to eat and made my way to the event. On the deserted trains, train staff and the odd other marathon runner wished you well. Once at London Bridge station you are all in the same position, there’s a nervous excitement and buzz, everyone is mentally preparing themselves for this huge occasion.

In the starting pens, it’s much the same, everyone nervously stretching out, meditating, and the last minute dash to the loo. Then your moving, very slowly, I was right at the back blue start zone 8. And as you come round the corner to the grandstand, the roar of the crowd hits you, the music thumps through your body and the runners slowly disperse and get into their running routine. Right, it’s you and the end….lets go!

I wasn’t prepared for the effect the crowds of people cheering my name would have on me, thinking about it now as I write this it give me Goosebumps. The hashtag for the London marathon is #spiritoflondon and this truly describes what the marathon is all about. People lined the streets, enjoying watching us run past, they cheered, they hollered and during the blistering heat were handing out ice lollies, ice cubes, sweets and water.

The Cutty sark and Tower bridge were a highlight, the crowds were at their loudest, the day was at it’s hottest and you had seconds to admire these historical landmarks you had the privilege to run around and over.

I got to the 15/16 mile mark and couldn’t run anymore, the heat had caught up with me, the refreshing showers dotted on the route helped for a few moments but minutes later you were dry as a bone and wishing for another shower. Very different to the conditions I was used to running in! I carried on, slower but carried on, always with the cheering of the crowd in my ear. I got to 20 miles where I’d really slowed, and I hit ‘the wall’. I couldn’t carry on, my feet hurt and I could feel the blisters. The route had become quiet, nearing the end of the day many had gone home with the vast majority of runners having finished. Several coaches drove past full of marathon finishers with the well-deserved medals, they even started to close the course not far behind me…I became miserable and for the first time I wanted to give up. I was lonely, barely any runners in front of me and barely any behind. I rang my family for much needed reassurance and they pushed me to keep going – I had made 20 miles, what’s another 6? 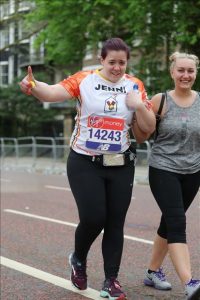 Just as I was going to stop, this lady walked past who had met up with her cousin to help her, she looked at me and asked if I was ok and I burst into tears. She grabbed my hand and walked with me almost to the end, I will be forever grateful this complete stranger-without her I would of stopped!

I finally reached the mall, and after seeing my family on the other side of the railings managed to pick up the pace enough to finally FINALLY cross that finish line where a biggest heaviest shiniest medal awaited me! I had done it, I had actually completed the London Marathon 2018 – the hottest year so far and in doing so I raised of £600 for charity and gained a whole new perspective into the meaning of the spirit of London!

The stranger who helped me the last 5 miles or so, the strangers along the route who cheered and handed out drinks and ice cubes, the camaraderie from the fellow runners. Nothing anyone who has done the marathon will prepare you for both the worst and best experience of your life. I may have sacrificed hours of time running, the honour of ever getting my feet out in public again (trust me losing three toe nails and multiple blisters is not pretty!) and paid out hundreds in running equipment to be able to train properly but what I’ve gained is so much more.

I’ve gained a huge sense of achievement, I completed the London Marathon, one of the most highly esteemed running events in the world, I ran alongside some amazing people and was cheered on by the real spirt of London. If you are like me, someone that isn’t an experienced runner and thinks I can’t do that – YOU CAN. I thought like that and as someone who has battled with crippling depression for years, this helped tremendously. It gave me focus, and a goal, and at the end everyone I loved was exceptionally proud of me and most importantly when I look back at my official finisher’s photo and my medal hanging pride of place on the fire piece – I for the very first time in perhaps forever was proud of myself!