In October 2018 I watched my sister run the Royal Parks Half Marathon. In January 2019, I signed up to ‘Race At Your Pace’ and ran 25 miles throughout the month of January. At the end of January, I completed my first Park Run. I then watched my sister complete two more half marathons, and in April, I cheered her on from the side lines at The London Marathon.

Three weeks ago, I ran the Royal Parks Half Marathon 2019 and learnt that I have a place in The London Marathon 2020, running alongside my sister and raising money for Rennie Grove Hospice Care.

I have always been a keen gym go-er but I had always focused more on weight training, so running seemed like the next thing to try (I also wanted some shiny medals) I have a history of mental health issues caused by being bullied when I was 16 so exercising helped me to keep negative thoughts at bay – but we won’t dwell on that. This isn’t a sob story, this a badass motivational ‘finding myself’ type story.

Let me back track a few months. At the beginning of this year I was filled with inspiration from watching my sister run half marathon after half marathon and in a moment of madness signed myself up to run The Royal Parks Half Marathon in October in support of Mind, the mental health charity, “it’s 7 months away, plenty of time!” I told myself (I feel that it’s important at this stage to note that in January I couldn’t even run 5K). So, I signed up for my first half marathon and the training began in March. When I say training, I mean I did Park Run once a week whilst going to the gym during the week and prancing about on the treadmill for 20 minutes.

In May, my mental health began to deteriorate. I was slapped in the face by a handful of huge life changes that came out of the blue and I struggled to keep a hold of my control over things. With my mental health and self-esteem in tatters, I needed a focus, something to concentrate on. So, I turned to my training, and boy oh boy did I underestimate the power of running!

I had a 10K and my first ever race, booked for the end of July, so I started off training for that, up to 5 miles no further. It was difficult and I struggled on most of my runs, I’d come back miserable and moody because my legs hurt or I couldn’t get my breathing right or I was slower than normal. But despite the overwhelming and awful feeling after having a bad run, nothing could have prepared me for the feeling of a good run. You just feel invincible and so incredibly proud. Like you have finally really achieved something in life besides just getting out of bed that day. 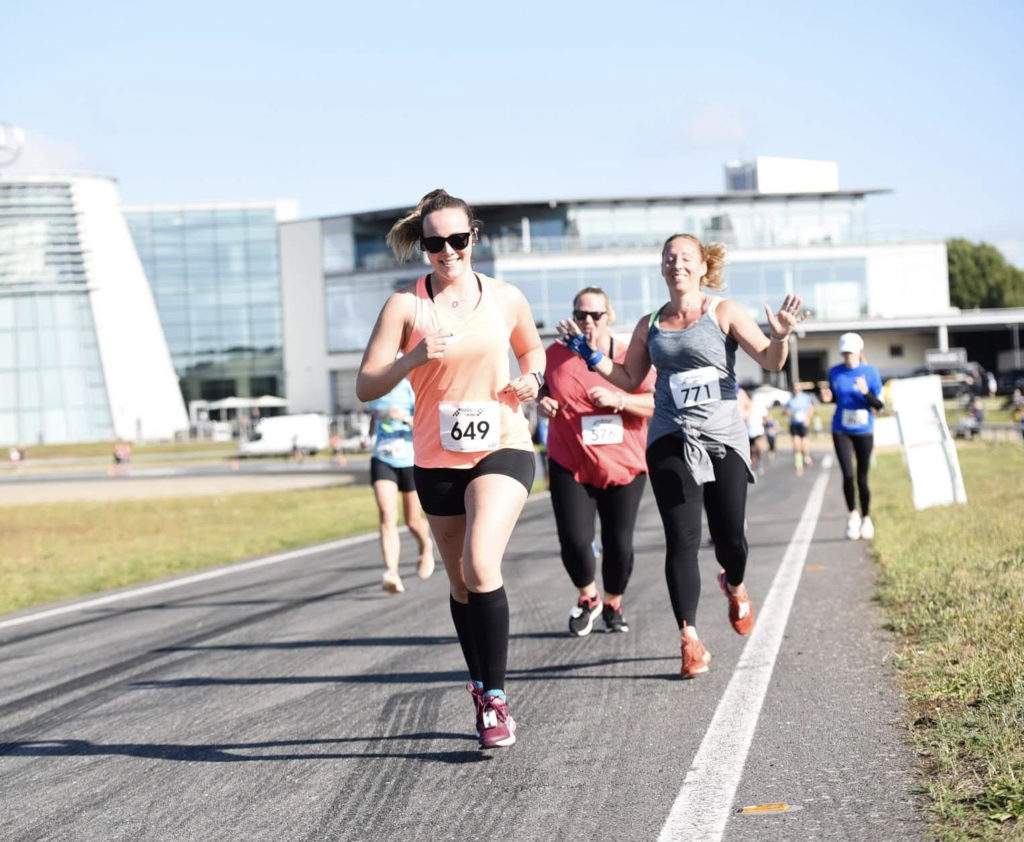 I ran my first 10K in London and I was hooked. That feeling of going over the finish line is something I can’t quite put into words. I signed up to a few more 10K’s including a couple of RunThrough events (because why would you NOT want one of their post-race flapjacks?!) to keep myself ticking over until the half marathon. I also began to take my training more seriously – I realised that while I was running, I wasn’t thinking about any of the other problems in my life, it’s like your mind just goes quiet for a little while, it’s peaceful almost. Just you and the road.

October came around in the blink of an eye and two days before race day I found out I had a spot to run the London Marathon 2020 alongside my sister. “Great, if I don’t like the half marathon on Sunday, I’ve just got to do it twice, in one go, in April….’ I thought to myself. I tried to push any negativity out of my head, “what will be will be, just enjoy it!” I kept thinking. I tried to keep any pressure off myself, I had done the training, I knew I could do it!

The first 7 miles went by in a blur and I loved every single second. My sister and best friends were there to cheer me on while I soaked up the crowds and the atmosphere. Mile 8 was my downfall, the heavens opened, and my legs began to seize up. I felt like the bottom half of my body was made of lead. I made it to mile 10 “come on, it’s just a park run left!” I told myself repeatedly. It might have only been a Park Run but I can tell you it was the longest 3 miles of my life. I was cold, wet and everything hurt, but I could see the finish line (although I’m sure it was slowly moving further and further away from me as I ran towards it). 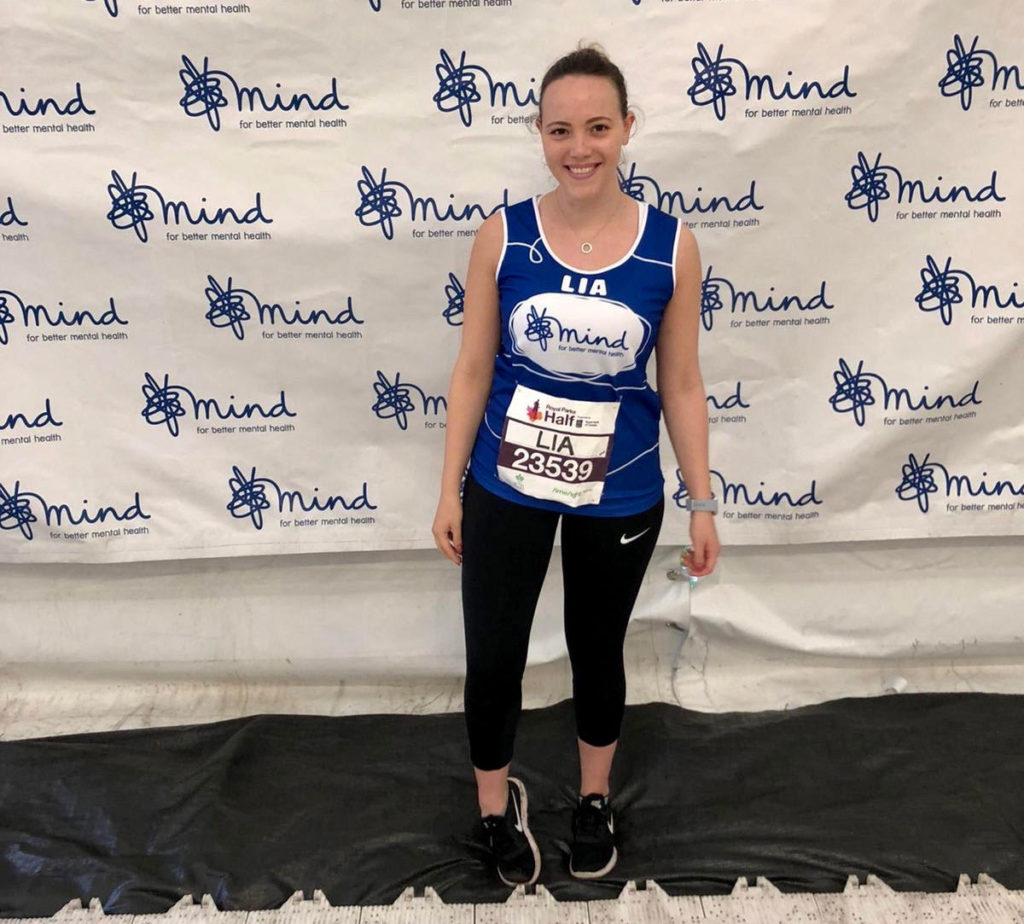 I crossed the finish line and blurrily collected my medal. Someone handed me a reusable bag, presumably to put my post-race goodies in although I walked straight past those, I don’t think I even saw them. I got handed a finishers t-shirt and made my way out to where friends and family were stood eagerly awaiting to see their loved one’s post-race. I saw my sister and disappeared into a hug; I began to cry. I cannot explain to you that feeling, I can’t quite put it into words. Everything I had been working towards for the past 7 months, the reasons why I started running, the personal battles and mental mountains I had to climb to get myself there. I had done it.

“Just the Marathon to do now!” people seem to enjoy saying to me. I also get a lot of weird looks when I tell people that I run. The most common reaction when I tell people I’m running the London Marathon next year is a slightly concerned look followed by “why?”. I will tell you why…

Simply put, running has given me a reason. A reason to get up and get out. An outlet. A routine. It’s given me challenges to work towards, goals to set, PBs to smash. When I’m not running my mind is a whirlwind, my thoughts resemble your headphones when you leave them in your pocket for too long. But when I’m running it’s peaceful and quiet and for that small part of my day, I’m not controlled or defined by my mental illness, I’m just me. I may not be fast and I’m certainly not on my way to running a sub 2-hour marathon anytime soon, but I am determined, and for the first time in a long time, I finally feel like I have a reason!!

If you would like to show your support to Lia and help her to raise money for Rennie Grove Hospice Care, head to her Just giving page HERE