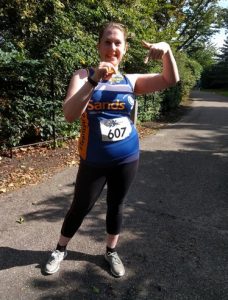 Favourite running shoe and clothing brand: Asics make good shoes for people who over-pronate, like I do, and Under Armour has great stuff. But I also love good old M&S for basic stuff if you’re just getting started and want to kit yourself out on a budget.

After 3 IVF treatments, and losing my son Isaac at birth on 31st July 2015, I hated my body. It hadn’t done what it was supposed to, it hadn’t kept my child safe. I had spent years on hormone treatments, jabbing myself with needles, recovering from a hospital stay and an emergency caesarean – and then comfort-eating my way through grief.

Then I got a new job, which required a lot of walking. And I got back to my beloved hobby of amateur dramatics. Which meant I started using my body for moving, expressing emotion onstage, and for making art. Then, I saw a Facebook post from a friend of mine in a bereaved parent support group and someone they knew was running the London marathon in aid of SANDS (the stillbirth and neonatal death charity).

[toggle title=”More about SANDS…” state=”open”]Sands is the stillbirth and neonatal death charity. Which operates throughout the UK, supporting anyone affected by the death of a baby, working to improve the care bereaved parents receive, and promoting research to reduce the loss of babies’ lives.

Sands was founded by bereaved parents in 1978 who found that there was no access to support following the deaths of their babies. Since then Sands has grown, but parents who have experienced baby death remain at the core of everything they do.

The Sands Helpline works together with our local volunteer Groups and befrienders to ensure that anyone affected by the death of a baby has access to compassionate, experienced support.

Which got me thinking, “I can’t do a marathon – but maybe I could try to do a 5K and maybe I could raise money for SANDS in Isaac’s memory at the same time.”

A bit of research, and I found RunThrough. It looked like a friendly, not-too-scary environment for a newbie like me, and they were doing a run the weekend after Isaac’s second birthday.

So in April, I downloaded a Couch to 5K programme, bought some trainers, and started making my slow but steady way around my local park. After completing my first training run, I was elated – but terrified. I’d struggled to run 60 seconds at a time, 8 times – how could I ever do a full 5K? But slowly and surely, my stamina increased, I started running 3, then 5, then 8, then 10 minutes at a time … and on August 5th, wearing a necklace with my son’s name on it, with Isaac’s godparents cheering me on, I crossed the finish line at 36 minutes and 20 seconds. Best of all, through the generosity of family, friends, colleagues, and others, I raised over £1,000 for SANDS – supporting bereaved parents and funding research to save babies’ lives!

My medal is in my son’s memory corner. And I’m already looking forward to my next run.