I’ve got to be honest and say that apart from a brief foray into cross country as a teenager, I really hadn’t been interested in running. That was probably lucky given that I was set on fire by a ‘friend’ when I was 15 and almost died, once I survived I had to embark on a long battle to save my left leg, or at least make it workable/salvageable.

To add context, I had been in local authority care for 4 years by this point and had suffered horribly at the hands of my parents before that. Being badly burned was just the icing on the cake with regards to stress vulnerability.

While developing into a young adult with little to no support I was in and out of hospital and generally on the verge of homelessness, I was also dealing with psychosis and PTSD as well as body dysmorphia, the last two attributable to this quite major single incident.

What is Body dysmorphic disorder?

Body dysmorphic disorder (BDD), or body dysmorphia, is a mental health condition where a person spends a lot of time worrying about flaws in their appearance. These flaws are often unnoticeable to others. Read more about BDD HERE

I was in and out of a leg brace for 10 years or so while undergoing operations, this had left my leg really weak along with the lack of a number of muscles that had been burned away and I’m going to be honest, I had discussed amputation a number of times with several consultants.

In 2014 I had operation number 30, this was a medial cruciate replacement which was hoping to address hyperextension that had been going on for years, in recent years I had been waking up during the night with my knee dislocated and meniscal fluid escaping from the side of my knee, the gap was so wide I could use my fingers to push this back in and relocate my knee to the point I could straighten it again.

This operation was followed by another two in 2015 and a period of rehab that lasted into 2016. During my rehab I discussed the possibilities with my physiotherapist and she was honest, she told me I was just going for extra strength and mobility, I joked I wanted to play football and she laughed. I went back to my physio and he told me his work was done and my knee at least was as strong and functional as he could get it, he also added in that I could ‘do what you want, that ligament is probably stronger than your good leg’ in response I told him that I was going to run the Great North Run, a run that is famous the world over but just so happens to finish close to my front door. 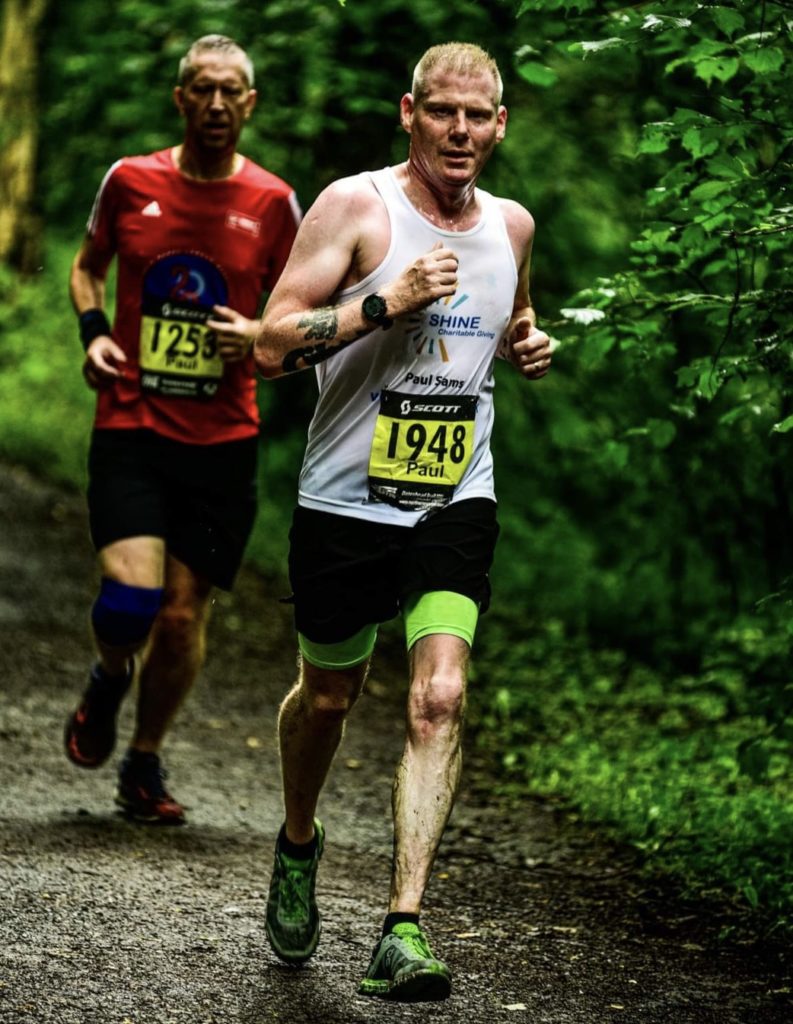 So started a journey that really has changed my life….I say that without being dramatic. I started with little runs, at first a mile or so and it would take three to five days for the swelling to go down, then I would go again. I quickly started to really enjoy it and was often left amazed after a run that my leg had managed it.

I started to really get into training and before long I was running twice a week and entered the Great North Run for a local charity Heel and Toe. There was no turning back now, I had started to raise money for kids with cerebral palsy, I couldn’t let them down. I really didn’t want to turn back, I was loving running and the fact I could run. The pain was tough and I didn’t share with my wife how much it hurt because I knew she was worried about what I was doing, I was worried too. My thinking was, I can run, I love running, I don’t know how long this leg is going to be with me, I’m going to run for as long as I can.

I eluded to it at the beginning, my mental health had been left in a poor state from a difficult childhood, my mobility issues had compounded this. I spent all of my 20’s under the care of mental health professionals and at times I was completely agoraphobic, I was so depressed and lethargic and often on a cocktail of anti-psychotic, antidepressant and pain medication, it often felt like I had my own weather system and the weather was always bad. I met my wife when I was 19 and she came on this journey with me, at times she was my carer as I was struggling to care for myself. My mental health was already much better by the time I had started running, I had started to make a success of things. As I got more well I started to catch up with the education I didn’t get as a child in care with a chaotic life, eventually going on to get two degrees from Durham University and I now have a career with the NHS.

Anyway back to running. As the big day approached I had set sub 2 hours as my goal, my training runs, although never to the full distance suggested it was possible. I had raised close to £1,000 too, this was really spurring me on. Unfortunately fate had another idea, I caught a cold three days before the race and on the day it was firmly on my chest, I should have deferred but really knew if I did, that would be it for my running. I ran and the adrenalin got me through, unfortunately I missed sub 2 hours, finishing in 2 hours 3 minutes 45 seconds…….I got a medal too, my first medal!

This set me on a road to getting stronger and fitter, I started Parkrun early the next year and entered a couple of local races in 2017…….more medals. I then got back to the unfinished business that was sub two hours, which I had set my sights on for 2018. My running by this point was coming on nicely, I had gone from 28 minutes for 5k to 23 minutes and I could do a sub two hour half marathon after work, just because I fancied it, oh how times had changed.

By the time September 2018 had come around I was aiming for sub 1 hour 50 and I managed to get round in 1 hour 49 minutes 15 seconds, result! This one nearly didn’t happen though. I had a benign tumour in my groin, probably a result of a number of surgeries in that area and the date for surgery was the Friday before the run, I’d actually cancelled my run number. I then got a call to say that my surgery had to be delayed, luckily I got the number reinstated.

Since then I have become faster and this year I have sub 1 hour 45 in mind, I’ve already done this on my own in training, my personal best now stands at 1 hour 44 minutes 44 seconds. My 5k personal best is 21:13 and my 10k best is 44:49, I know its not all about the times but these are times that I have to pinch myself at. I still drink wine and eat chocolate too, imagine if I was an athlete?

My bucket list goal is to do a marathon, I have promised myself that if I get to 20 miles in a training run I’ll sign up for Edinburgh, I’m currently up to 16.76 miles so watch this space.

To wrap this up I just want people to know that the perceived impossible is sometimes possible, I don’t think it is a coincidence that in the four years I have been running I have been the happiest and most settled in my life. I don’t take medication anymore, something that really messed with my mood and sense of self. I am not naïve, I know this might come to an end, my leg is strong but it doesn’t look like my good leg, it might break down in the future. If it does I will deal with it and come back. The benefits of running far outweigh any negatives, I have had less surgeries since running than before, previously it averaged out at one procedure per year, I’ve had one only in four years.

This year I am running for SHINE, this is the charity at Northumberland, Tyne and Wear NHS Foundation Trust. We provide support for people struggling with mental health, autism and learning disability related problems, SHINE provide the little extras that our cash strapped NHS can’t, SHINE only exists because of the generosity of public donations.