My name is Simeon Foreman, and I am immensely proud to be a founding “feather” and Club
Secretary of the Malvern Buzzards Running Club. Over the past five years, I have achieved my
running goals and had some tremendous adventures with some amazing people, but I am now
getting ready to “smash” the latest challenge; to set a Guinness World Record for the Fastest Half
Marathon dressed as a Badminton Player (male)!

I will be one of twelve Buzzards taking ”flight” at the Cheltenham Running Festival on 12 June 2022,
but rather than wearing my pink and blue vest, this time I will be sporting full badminton whites,
sweatbands and indoor badminton shoes whilst carrying a badminton racket, shuttlecock and
carrying at least four rackets in a single strap bag on my back.

Why are you doing this, I hear you ask?

Well, a few years ago I was lucky enough to be part of corporate team setting a Guinness World
Record for the biggest space hopper dance (bouncing along to Buddy Holly’s “Driving along in my
automobile” in a hanger at Silverstone). This was a great personal achievement as growing up in the
1980s, Record Breakers was TV gold. But the record was not to last, and it fell to some Americans
after a few months. But it had got me thinking, what else can I do? What has no one done before? 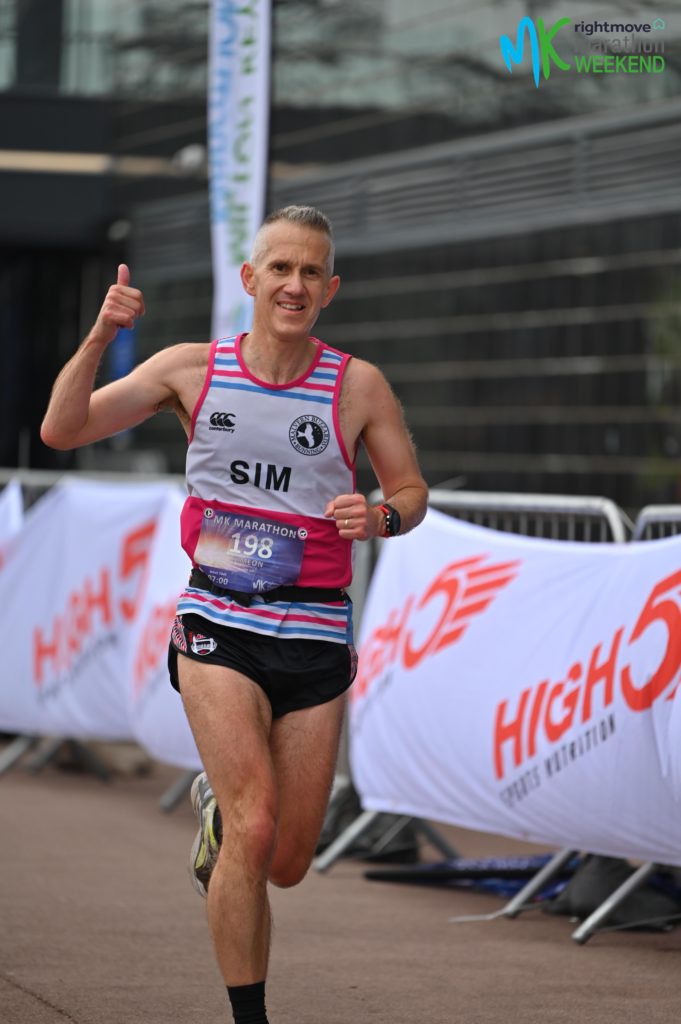 Armed with my racket and my shuttlecock, I will be attempting to set a new world record. I need to
provide a lot of evidence to Guinness World Record so will be asking runners and spectators to take
lots of photos and tag me on Instagram where I go be the alter ego of @simbuzzard.

The race is the first of three that I am doing this year to raise money for charity; Cheltenham Running Festival Half Marathon (June), TCS London Marathon (October) and the Endurance Life Gower Ultramarathon (November).

The charity I am supporting is The Smallwood Trust, a national charity based in Malvern, who
provide help and support to women facing financial difficulties. At this time of rising living costs,
their work is more important than ever. If you are able to make a donation, however small, then it
would be greatly appreciated.

You can do so here:
GO FUND ME

I look forward to seeing everyone on 12 June and would like to thank everyone at Run Through
(especially Katie and Emma) for providing the various documents and pieces of evidence I need to
show to claim the record.

I also want to thank everyone in the Malvern Buzzards Running Club for making our amazing club
what it is – in Botswanan culture, BOTHO means “you are what you are because of the people
around you” and it also translates into an acronym for “Buzzarding Of The Highest Order”. I hope to
see more of you with world records very soon.

And finally I want to thank my wife, Emma for always being there for me and supporting me, even
when I am trying to sneak out to train at 05:30 in the morning, or when I have “just had an idea”.

Malvern Buzzards Running Club came about during the Summer of 2016 when a group of like-
minded, trail runners in the Malvern Hills area decided to set up a club on Strava. Personal invites
and Strava segment battles brought more people and friends together and it was then decided to
form a club. The inaugural EGM was held in October 2017 at the Great Malvern Hotel and in
January 2018, the Buzzards were affiliated to England Athletics (Club number 7693045).

Through our qualified Run Leaders, we aim to provide a wide range of Club runs each week to cater
for all abilities. The runs are organised on Strava as events and members &quot;click in&quot; to those they
want to join.

Runners of all abilities over the age of eighteen are very welcome, and we hope you will join us for a
run soon. Please check out our Facebook, Instagram and Twitter accounts.

The club has over 180 members currently and is an active supporter of local shops, venues and
charities for more information about Malvern Buzzards Running Club, visit our website: