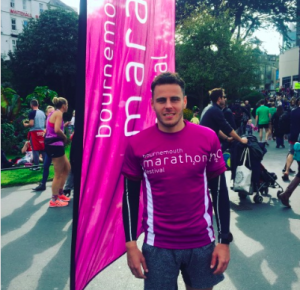 Simon Vaisey has set the bar extremely high for himself as he begins his mammoth challenge of running 50 marathons in a year. His challenge started with marathon no.1 on Sunday 9th September, a couple of weeks ago, and here is his story…

Every so often an idea can come in to your mind and you can’t let it go. This has been one of those ideas. It’s an idea I will be putting into action come September 9th 2018, where I will run the first of fifty marathons.

It won’t just be about running a marathon though. Some might think that a marathon is predominantly a physical challenge, but as any seasoned marathoner would know, it is very much the mental battle that you face. These marathons will hopefully take me on journeys where I tackle challenges I would never have dreamed of facing, as well as raising awareness of mental health and wellbeing for everyone, letting each individual know that you can break through any barrier that you feel might be in your way.

Let me take you back to where this all began. I have always been a happy-go-lucky kind of person, continually positive and pretty laid back. Nothing ever phased me, and I life was – for the most part – pretty good to me.

Fast forward to January 2015, and things had done a 180. I was beginning the 2nd term of my first year at university. Things weren’t going great – factors that were both in and out of my control were the forces of this change. Without family and a secure network around me, my mental health declined rapidly. At first, I can’t say I really noticed. It was when I went home to visit those closest to me that I realised something was ‘off’. But I carried on as normal as possible, thinking it would ‘blow over’. It didn’t, so I decided to move back home and my university allowed me to sit my exams later on in the year, so I could care for my mental health.

Through self-care and immeasurable support from my friends and family I came out to the other side, for lack of a better term. However, through first-hand experience I can vouch for those who don’t seek help, especially us boys and men. Embarrassment and lack of understanding. However, there are a mass of charities and organisations changing this, as well as individuals (such as writer Matt Haig) who are using their voices shout about these issues.

Through my hopeful completion of 50 marathons, I hope that my efforts can support the implementation of a more rigorous support network for young people in our schools, colleges and universities. After all, 70% of children and adolescents who experience mental health problems are not given appropriate intervention. Does that seem fair?