My name is Steve, I’m 51, I live in Winchester and my running journey started in early January!
I’d been used to being outside every day during the Christmas holiday but found with the return to work that I was no longer getting a daily dose fresh air. Within a couple of days I decided enough was enough and put on my trainers, some warm clothes and went for a run at 5pm under the streetlights. We had also entered a national lockdown at this point in time so the streets were relatively quiet. I found it lifted my mood enormously and quickly became part of my daily routine and something that I looked forward to doing doing to end my working day.
Soon I was running 5k four times a week & really enjoying it.
Then I read an article posted on Twitter by GQ magazine in mid-March about ‘gratitude running’ I’ve been part of a Practical Philosophy group for over a year and we’ve spoken about gratitude a lot!
So, at 4am on Saturday 20th, I ran 3.2 miles & then a mile every hour until 3am on Sunday with each run dedicated to someone or something I’m grateful for, I lit a candle at the end of each run. That evening I started to wonder whether it would be possible to run an actual Marathon.
A quick Google search and I’d found and registered for the RunThrough Marathon event at Kempton Park on the basis that there was little cost difference between the 5k & Marathon and as it was a circuit in the worst case scenario I would only need to walk 2.5kms back to my car. I thought this was a now or never moment, no time to overthink and never had I realised that I significantly need to increase my running time to somewhere near 3 hours in order to have any chance of completing the distance and set about a very basic schedule.
I found a 10km loop near home and set about completing that in an hour, a few days rest and then two laps, a few days rest and then three, leaving four clear rest days before the day of the event.
During this time I also carried out some basic research and established a recovery method, a hydration and fuelling strategy and a running rate – 5’41″/km – to break four hours which seemed to be something of a thing.
So to the day of the event. Kempton Park was chilly and breezy but superbly well organised by the RunThrough Team. Having water available every 5km run gave me huge confidence as did the Marshalls who gave encouragement on every corner of the course. Things mainly went to plan. I managed the first half in around 1’50” and was relieved to have a buffer in the final 7kms. As I approached the final km my average pace had dropped to 5’42” but the sight of the finishing arch spurred me on to complete the final km in 5’09” my quickest of the day meaning that I crossed the line inside four hours!!
It certainly wasn’t a text book approach or one that anyone might recommend but it worked for me because…. 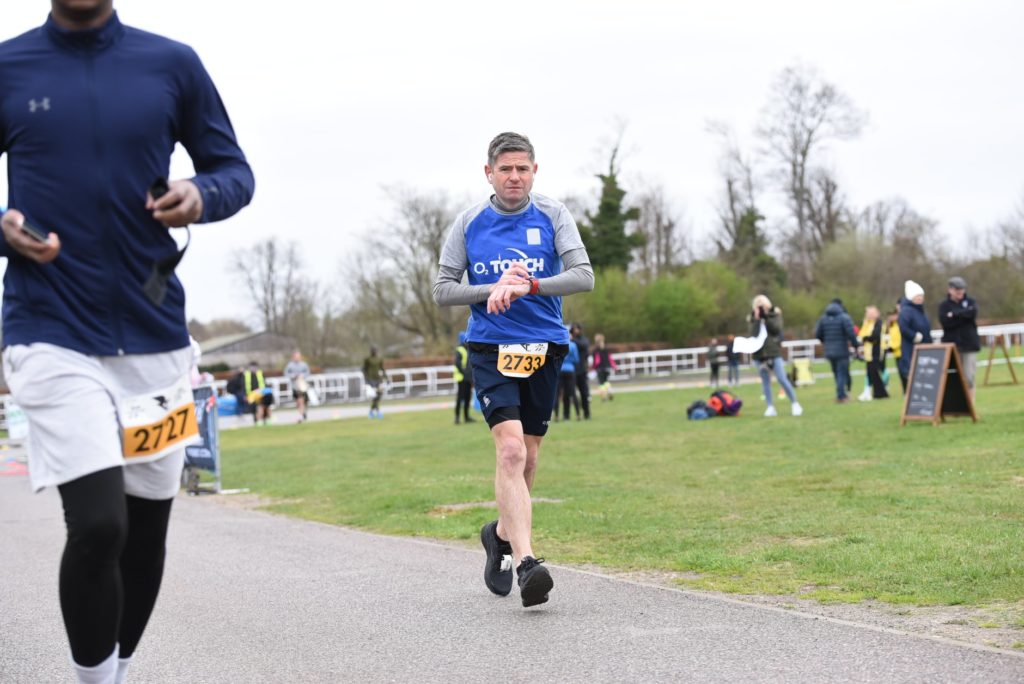