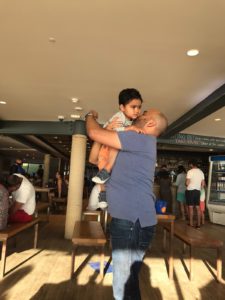 I’m a 42 year old, married, father of 1 toddler who is 28 months old with our 2nd child due in July. I work as a Business Analyst within an Ecommerce platform provider. An office based, desk job.

My typical life before the pandemic and running was to go to the office, try and force myself to a gym class at lunchtime a couple of times a week to stay within the boundaries of respectability when it came to my fitness and appearance. I’ve never been slim and always been a tad overweight with a podgy tummy. My goals throughout adulthood when it came to diet and fitness was always the same, numbers on the scale and aesthetics. I’d cycle through being quite overweight to relatively fit, but a bit podgy, but never happy with my appearance.

My work office closed at the end of February 2020 and we were told we needed to work from home for the month of March due to Covid. Then the national lockdown came in March. Now without my routine of going to gym classes a couple of times a week gone and not being particularly busy at work (as I was between projects), I had no real routine when it came to my fitness or diet. I’m a keen cook and baker and when the baking craze hit in the 1st lockdown, I got carried away and started baking almost everyday! I also started drinking regularly in the evenings as well as eating more freely, whilst doing little to no exercise. (I occasionally did the Joe Wicks PE, but my interest waned) Then when lockdown was lifted, we took a couple of UK breaks and went out regularly. I piled on the weight and became really unfit. Even my “fat clothes became tight!

I had a pair of running shoes from 2010, as I had taken up running then when I signed up for the Reading half marathon at that time having never run before! I really got into it, but I didn’t know what I was doing back then and I just ran each run faster and longer than the previous run when I eventually got injured (knee pain) and didn’t make it to the half marathon.

With working from home and not being motivated to go to the gym (or they were closed due to lockdowns) and having piled on the pounds, I laced up my old running shoes at the end of July and went for a run. I just about managed 3km at 7:04 min/km. I really enjoyed it, but was afraid of getting injured again or not being able to run far. I had tried to resume running again in 2014, but again got injured (with the same knee pain) as I made all the same mistakes as before. Each run had to be longer and faster. With this fear in my mind, I took it really slowly this time and never ran more than twice a week and never 2 consecutive days. I felt really proud as I managed to increase my distance to 4, 5 and then 6km and my pace was getting faster week by week. By October, I was able to run 8km at 6:30 min/km, but started to feel my knees again. However determined to actually run at an event, I signed up for the RaceThrough 10km at Newbury racecourse on 17th October. 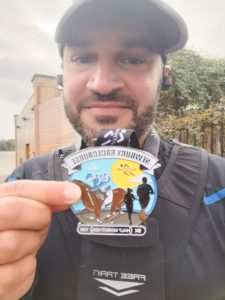 I had only run 10km once before that race a few days before and my knees really hurt. I thought I wasn’t going to make the race, but I was determined to get to the start line this time even if I had to hobble round. On the morning of the race, I took a couple of anti inflammatories and wrapped my knee up and made myself to the race. I didn’t have a running watch, just a phone on my arm and Strava. I was a fish out of water when I got there, I didn’t know how to put on my race number or the chip tag, but the RunThrough staff were so friendly and helpful. I was aiming for sub 60 and got round in 1:00:44. The course was a tad longer than the Strava GPS 10km distance on the day, so whilst Strava had me under 60 minutes, officially I was just over!

Buzzing from having completed my 1st race and determined to get under 60 mins for a 10km race, I signed up for another 10km race a couple of weeks later at Dorney Lake (with Purple Patch Running) . I took myself down to the running shop, got my gait analysed and purchased a new pair of running shoes. They couldn’t believe I was running in 10 year old shoes that had seen better days. Still having little knowledge of running shoes at this time, I was amazed at how great my new shoes felt and how the knee pain didn’t come on at all with them. I ran a 58:15 in my new shoes and was totally over the moon.

I now had the running bug big time and signed up to several more 10k races and purchased a Garmin running watch. My last 10km race was at Goodwood with RunThrough on 6th December where I ran a 52:54!

I had totally caught the bug now and was keen to progress to half marathons. I had tried to slowly add distance, but was gassing out or my knees started hurting. I was still running one paced. I started watching YouTube videos about running and then started to understand different types of runs at different paces and distances, different types of shoes, nutrition etc as my knowledge increased. I started to add variety into my runs and then set myself a target of a sub 2 hour half marathon. I began a Garmin Coach training programme on my Garmin watch which lasted 16 weeks (as I had booked for the Reading Half Marathon) which was possibly the best thing I have ever done in my very short running life. It taught me a lot and guided me perfectly. As lockdown 3 hit and the half marathon got postponed and other races got cancelled, I continued with the training determined that I’ll run a sub 2 hour half marathon, even if it’s just a time trial by myself. Getting heavily engrossed in various youtube channels about running, I started buying more and more kit and now have a shoe rotation of 3!

As an end to lockdown 3 was announced and events started to come up again, I signed up for the RaceThrough Kempton Park half marathon and the Goodwood half marathon in case Kempton got cancelled, as it was moved around a couple of times. I kept focused on my training plan and was chuffed when it finally came about. I was so pumped for the race and super prepared with the kit shoes, nutrition etc as I had totally become a running geek by now. I ran it in 1:52:47. Whilst I was confident I could manage a sub 2 hour half marathon, I never expected to run as well as that. I then set about trying to get a sub 1:50 at Goodwood where I managed to squeeze in just under at 1:49:34. 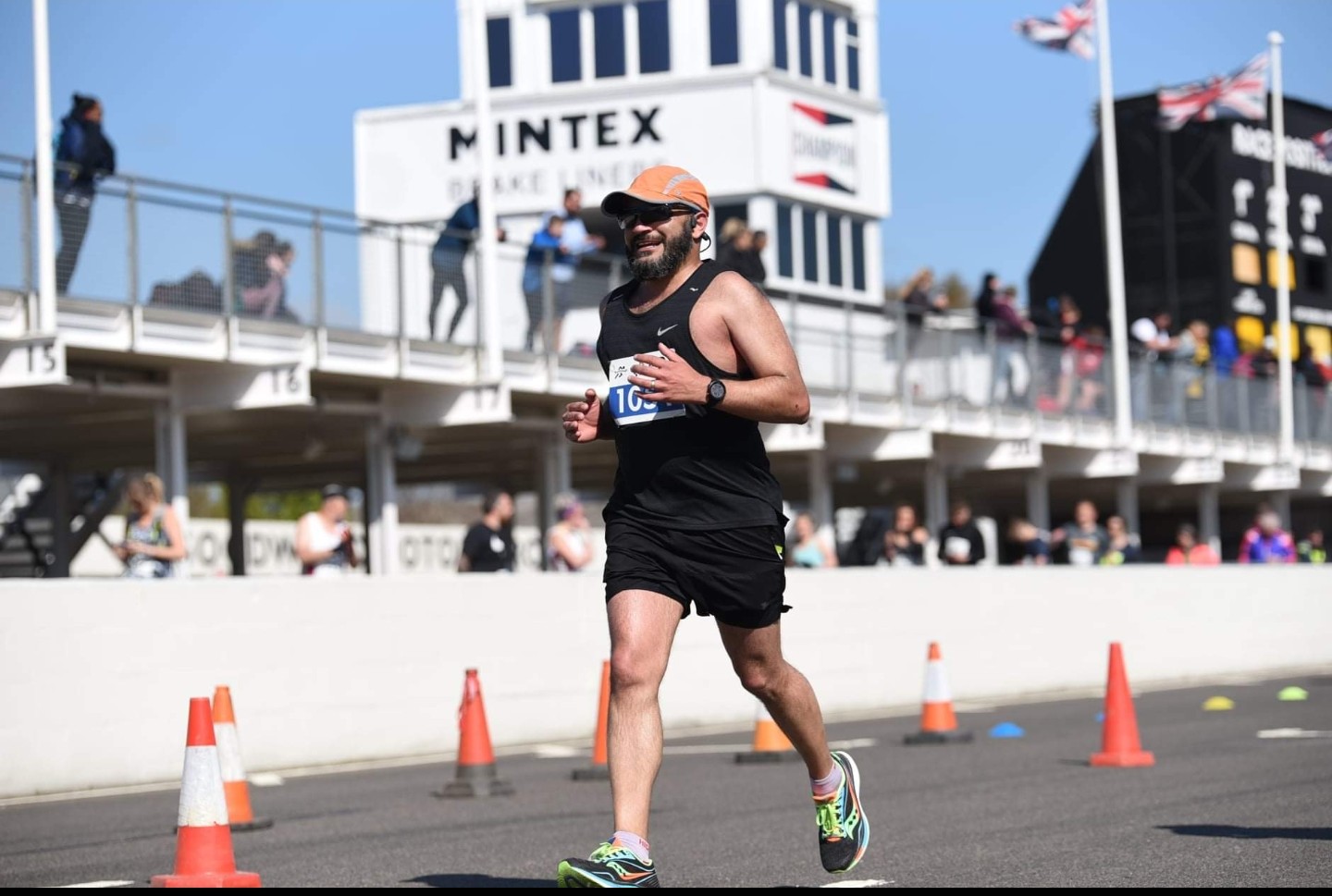 As my wife is heavily pregnant and due in July, I will now have to take a break from races. I have however signed up to 3 half marathons in autumn! The Wokingham half marathon in September, Silverstone half marathon in October and Reading half marathon in November. I’m super excited for them and am a bit lost now as I’ve become so addicted to these races! I will be targeting a sub 1:45 for the autumn races and look forward to doing a training plan for them. Next year, 2022, I ‘d love to tackle a full marathon with an aim of running it under 4 hours. But I can’t imagine doing 2 half marathons back to back right now! But then I thought that when I ran 10k races!

For the first time in my life, I am no longer chasing an aesthetic or numbers on a scale or a jean size. I still don’t particularly like how my body looks, but for the first time in my life, I no longer care, as now I am proud of what my body can do. I am now more consistent than I have ever been with diet and training as I am no longer focused on the scale or aesthetics, but performance I can actually measure, target and plan for as a goal such as distance and time. I very very rarely weigh myself now. Now it’s just about setting a time/distance goal and planning to achieve it. The weight, aesthetics etc is just a by-product of that. That is how my mindset has shifted and helped me become consistent and motivated. Exercise and training is no longer a chore, but something I crave day and night. Running has given me that and lockdown has given me the opportunity to find it.

RunThrough has been by a million miles, the best running event company I have experience in my very short running journey thus far. I am only 6 races in, 4 of which have been with RunThrough. The staff, the supportive FB group, the comms, everything is fantastic, especially the flapjacks! So thank you.