I was thrilled when I was asked to write this piece about a sport I now truly love.

I say “now” because I haven’t always been a runner in fact when I was younger in my teens the only running I did was running home on a Saturday night trying to get home before my curfew. I remember once my older brother, who became an ironman competitor, talked me into going for a training run with him, in my home town of Rothesay on the Isle of Bute, I was around 15 and he would have been 19 at the time, I reluctantly went out with him, we ran along the tarmac promenade for a bit and into the Skeoch woods where we were to do hill sprints. Reaching the woods I was already hating every step I took, I started on the hill sprints and by the second time ascended I was a wreck. Puffin and panting, I broke down like a spoilt brat and bawled my eyes out, refusing to run anymore like my life depended on it. I never ran again for at least 12 years when I ran in the Cork City marathon, after I achieved that I had a bigger achievement to tackle, becoming a daddy… 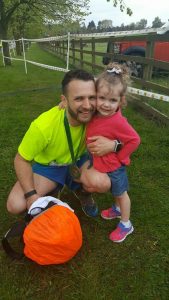 I began running again just 2 years ago, nearly 8 years after Cork, someone had told me about this sport called ultra running, and how a friend of his had tried it and said it was brutal. I had never heard of it until that time, and the thoughts of it being brutal appealed, so I began looking into it. What attracted me to ultra running at the time was taking part in something extreme, that not everyone can do, that pushes your body and mind to and past its limits. So I signed up for my first ever Ultra, jumping in the deep end with 52 miles of the Malvern Hills. I trained as much as I could, which was very little next to nothing and took part in a couple of OCR’s before it, I was not anywhere near the shape that I needed to be in to run 52miles physically, but mentally my mind was there 110%. I had the determination that was needed, I never like to give up on anything, ever, and I will try and try again until it’s done. Since that first ultra I have ran in 10 more with two DNF’s after 30miles, several mountain races and a couple of mountain marathons. I love the mountain races for the same reason as the ultras and a little more, the risk, the extremeness of running in the mountains along rugged ridges, rocky terrain at high altitudes with the risk of one wrong footing and you’re going to end up with more than a twisted ankle and Elastoplast.

The 100% focus and concentration that is need in some of these races completely clears my mind of everything, every daily stress, challenge and worry, and when the race is complete all those daily issues are gone, the daily challenges become easy to solve and I feel revitalised.

So what do I think it takes to complete an Ultra?

Firstly I am not an expert, everything that I write about works for me, or I have experienced, or is just my opinion. I try and eat well but that doesn’t always happen, I just try more not to eat too much rubbish. Being super physically fit is a positive but not essential, you can walk an ultra you know, it will just take you a very very long time and so this is where the main thing I believe that will get you through an Ultra comes in, your mind. Mentally you need to be prepared for it, you are going to be on your feet for a long time, you are going to be in pain, you are going to be cold, wet or extremely hot and feel uncomfortable, you’re going to feel hungry but you need to watch what you eat, you’re going to feel tired, you’re going to go through so many emotions that you didn’t know where possible in race, and you may need to pee or pooh in a bush at some point. You have to have an abundance of determination, the sort of determination that border lines on being a stubborn so and so. The more determination you have the further you will be able to go or until your body breaks. “You can walk an ultra you know”, you can if you have determination, the longer it takes you the more determination you’re going to need!

I would say physically you need to really know your body, you need to know what its capable of and when you’re feeling just a niggle that needs stretching or it’s a niggle that’s a show stopper, when you can push and when you have to come of the gas, pace yourself it’s going to be a long journey and you need to know that you have enough in the tank to get you to that finish. We all have those niggles somewhere in our bodies if we do the training we know how to deal with them on race day. I get a niggle in my left shoulder, always around the 16th mile, I shake my arm around like a chimpanzee a few times and its gone, never comes back, my right knee sometimes gives me a little pain, I change my running stride and footing a little till it’s gone, then go back to running normally, these to me are niggles in my mind as much as my body.

I have been lucky so far that I have never experienced a physical show stopper, although I have had a mental show stopper, I packed it in once at the 30th mile of my first 100mile attempt. I knew by the 20th mile that I wasn’t going to finish, I wasn’t mentally prepared for that distance, I let the cold and darkness get to me, I wasn’t enjoying it as I had previous ultra’s, I took the wrong trail a couple of times which added to my frustration and acknowledgment that I was not going to continue. Gratefully my family were there to see me and hug me at the 30mile loop check point, where I shed a few tears for my first DNF.

I go through so many emotions when I’m running an ultra, excited, annoyed, angry, agitated, pain, anxious, determined, euphoric, anticipation, love. Funnily enough kind of in that order, from starting the race, to finishing there will be so many highs and lows, your determination is what is needed to bring you back up from the lows, I have seen myself arguing with myself like a crazy man at times during many races, one part wants to give up and the other part is telling me to cop on, don’t be stupid, pull yourself together, you got this. I have been seen to cheer myself on at low points saying out loud “come on Martin, let’s do this”, it certainly gets me some strange looks from other runners. But do you know what, you do whatever it takes to get yourself to that finish line, if that’s arguing with yourself, cheering yourself on or smacking your backside saying giddy up horsey, because that feeling you get when you cross that finish line, that special emotional feeling of overwhelming achievement is worth every minute of it. I have never felt that feeling stronger in any race than that of the UTMB CCC.

This year I’ve taken up the challenge of competing in an ultra race a month along with a few extreme mountain races and an OCR’s series, so I now try to train as much as possible!