Hello one and all! It’s been a while since I last blogged (Feb 2015) but I thought I would update you all after my 2nd marathon of the year!

After the slightly frustrating result in Marrakech in January this year, having missed my personal best by a mere 8 seconds I refocused my training and efforts on the Shakespeare Marathon in Stratford upon Avon which took place yesterday on the same day as the London Marathon. Having run this marathon before I was aware that the course wasn’t flat and indeed had 2 sharp inclines which I would have to overcome twice (take a look at the gradient of the course in the photo). 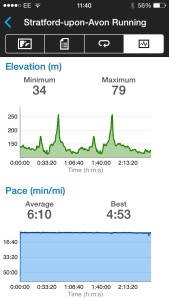 I made no secret of my aim for the Shakespeare Marathon; 10 years on from my first attempt at the marathon distance where I withdrew from the race after 20 miles having gone to the race with IT band injuries; I wanted the win! It was to be my 26th attempt at the distance and with any luck my 25th successful completion. Throw in a small personal best and the target and aims were crystal clear, anything less than the top podium spot would be considered as a failed mission!
This time around there were no hamstring injuries sustained 10 days out and my preparation had been one of a composed seasoned marathon runner, posting a solid 2:00:32 for a 20.2 mile race six weeks out from marathon day and obtaining a personal best time at my local parkrun just one week out from the big day.

Fast forwarding to race day (yesterday) and with some nervous energy and a few last minute jitters I jogged the 1.3 miles to the start line from my B&B. The weather seemed ideal, a cool 8/9 degrees with a bit of a wind. 3…2…1…mmmmmmmmmmmmaaaaaaaaaaaaa and we were off! The half marathon and marathon starting at the same time meant that I knew it was always going to be difficult to know exactly where I was in the marathon race as only the race number bibs differentiated the runners. I saw a few red marathon bib runners go past me within the 1st mile but I knew this was a marathon, not a sprint (pun intended).

I had already arranged for my Dad to be at the 12 mile split point to inform me of my position and how far behind or ahead I may be in the race. When I reached him he delivered the heart breaking news that I was 4th in the marathon and over 3 minutes behind the leader. In my head, I thought that the dream of the win was off and the best I could hope for was to keep following the man wearing yellow ahead of me who had been running like a metronome for the race so far and hope that I could steal a podium place somehow.

I went through halfway on target at 1.19.00 but just as my head started to fill with disappointment the man in yellow who had managed to increase the distance from me to 200 metres had managed to catch the next runner (2nd place). In that instant I knew that the race was not over until it’s over and maybe just maybe there might be a runner ahead who had overcooked the pacing.
I continued to 15 miles trying to close the gap to 2nd and 3rd but all I managed to do was to stop the gap increasing; I decided I would just have to stay patient and wait to see if they faltered in their pacing. Then the 2nd place runner wearing black and white stripes pulled into a bush to have a Paula Radcliffe moment…I has been handed a podium position!

I continued to follow the man in yellow but as we hit the sharp uphill and then steep downhill he pulled away some more to about 400 to 500 metres…the guy was a machine! However again just as I thought I would be settling for the lowest position on the podium I saw that the man in yellow was running with the race leader…the man who had been over 3 minutes ahead of me at 12 miles!

I watched from the distance as the man in yellow went past the race leader to take the lead. I stayed strong and passed the previous leader at 20 miles to move up a further place on the podium and enjoyed some renewed vigour and hope.

We entered the last 5.5 miles of the race, which predominately was on a straight flat path called the Greenway. The path was ideal for keeping sight of the man in yellow and back to my favourite type of gradient in a marathon…FLAT! I told myself that I needed to maintain composure with my pace as I knew at some point soon it wouldn’t be so easy but embraced a period of gliding along at a solid pace feeling comfortable and good. I had managed to get into the zone and become only aware of my own thoughts and then suddenly I was close! I was very close; I was 5 metres behind the man in yellow! How had this happened I panicked as I looked down at my watch to see if I had accelerated too quickly…but I hadn’t I was still on ideal pace!

Recalling the many tactical conversations I have had with my various running friends and the advice from the legendary Mara Yamauchi I decided that the time was now! I was at 21.5 miles and I needed to act, so I held my breathe (courtesy of Eirin McDaid) and moved passed the man in yellow who I had followed for much of the race. I stayed focused and avoided the temptation to turn around to see if there had been any response. I stayed at a cracking pace until 23 miles at which point I started to struggle.

Doubt started to cross my mind as I looked at my watch which confirmed that my pace had dropped by over 30 seconds a mile. Had I given myself enough of a gap to hold on to the win? The lead bike then informed me that I had dropped the competition and was looking strong…not sure who he was looking at but the phrase “should have gone to Specsavers” came to my mind.

The unthinkable was on…I had made up the 3 minutes and more that I had been behind at 12 miles and was now leading the biggest race of my life and all I needed to do was hold on…nothing special, no gap to close, just don’t fall off the cliff!

“Approaching is the leader of the marathon distance…its Nicholas Twomey from Ranelagh Harriers” proclaimed the booming voice over the loudspeaker positioned on the finish line. I was metres away from the win…I couldn’t believe it…10 years in the making, I looked at the crowd on both sides of the barriers, they were going wild…come on!

I crossed the line in absolute delight…I had won and had taken nearly 2 minutes off my personal best…2:41:41! If the numbers could talk you would see that they were very significant…add them together and you get 12 – the mile at which I thought it was all over, and then repeated twice the position I held at mile 12 and the position I held at the finish…4th to 1st!

The photos and presentation followed and there’s little doubt in my mind that yesterday was one of the best days of my life and there won’t be too many that beat it!

“If you keep believing, you keep achieving” (The Marathon Man, April 2015)

Perhaps it was destined to happen…where marathon running began for me and my 26th attempt at the distance…10 years in the making! 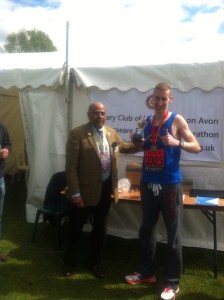