There’s an old joke about vegans, but I think it can be applied to runners who are at a certain stage in their ‘habit’. It goes:

How do you know if someone’s a vegan?

My name is Dan, I’m 34, I run and this is essentially my problem. I’ve recently started to talk about it – generally while dripping sweat onto my desk and wearing a two year old Run To the Beat T shirt.

So, rather than change – because who really wants to do that? – I have decided to change my audience. Instead of talking to bored/disgusted colleagues, I’ll talk to YOU . I’ll write about races, injuries, shoes and food. And that time I thought I was going to die from Joggers Nipple.

There will also be SOME dick jokes. I apologise for those in advance.

I can guarantee that this won’t be one of those ‘proper’ running blogs about people who do ultra-marathons and eat nothing but chicken and pomegranates. I am not one of those people – my results are average, I have back fat and I only really started running because my local takeaway started doing 20 inch pizzas.

But in the two years since I started running seriously, I’ve learned to love it. The thing I love most about it is how much it teaches you about yourself.

Here are some of the things I’ve learned:

During a particularly heavy period of pavement pounding I made a disturbing lesson – it is actually possibly to have a blister ON a blister. If I was ever single again, I am convicted I would have to keep my socks on when my date came back from the bathroom. Running changes your body in ways you don’t expect. My left shin bone looks like something they would find in a trench on Time Team. 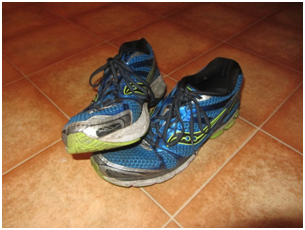 I Mistakenly Believe That I Share a Bond With Other Runners Just Because They Wear Saucony. Before I started running seriously I really thought expensive training shoes were a con. Then I started running and getting injured. I bought some bright blue Saucony Omni shoes and the injuries stopped. Now whenever I see someone in the park wearing the spiky ‘S’ I nod and smile. I honestly think if the Saucony corporation bought some Texas farmland, some guns, and told their customers to prepare for the end of days, I’d go. 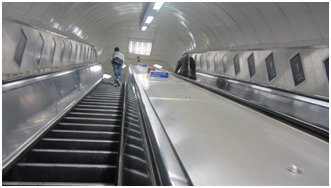 I never miss on opportunity during a busy rush hour to perch myself on the edge of an escalator, and to push down through my heel. It helps keep my soleus limber and allows the person behind me to get a much better view of my jutted out ass. 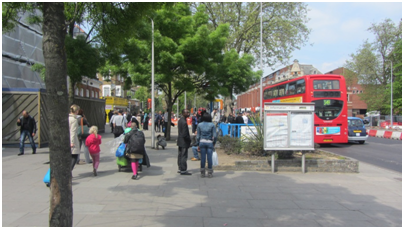 One of my favourite 10k routes goes through South Tottenham on the way home. The whole area is basically vandalised garages and staffies waiting outside chicken shops. But as I stop at the lights and swig my sports drink I often think ‘aw, it’s nice round here innit?’ Two weeks later I’m going passed the same spot on the bus and two drunk men are stripped to the waist in the rain, fighting for money while others watch. It is not nice round here.

Runtastic thinks I tried to run in a swastika?!?

There’s nothing like that feeling where you’re convinced you’re crushing it and then you check your app and you’re…. so not. It’s a humbling experience, although not as humbling as the time I did a chip timed half marathon and my app claimed that I had finished the race eight minutes later than I actually had. Which is possible, I guess, but only if I ran through a rip in the space time continuum just outside Ealing Broadway. If computers do ever achieve self-awareness, I hope the first thing Runtastic feels is shame.

On mile ten of my first half marathon someone handed me a bottle of bright blue liquid and a body that was grinding to a halt suddenly came back to life. Ever since then I have been a convert. If Lucozade said they were going to have to cut down the Amazon otherwise no more sports drink, I would first establish whether anyone I knew lived there and then would probably be ok with it.