The day of the Marathon is nearly here… 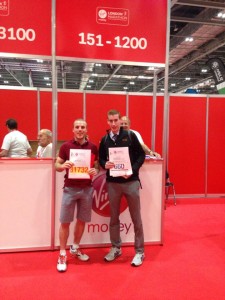 Firstly, my apologies for the delay of the final blog before the big day; my laptop sadly picked up a bug.
So I’m now firmly in my taper, 3 days from the biggest race of my running career and I would say the biggest day of my life. It’s been 27 years in the making, 22 marathons, one World Record, all in preparation for marathon number 23, The London Marathon 2014, the Greatest Race in the World!

Training has been a rollercoaster in the build up to this Sunday, but I have learnt a lot about myself and those around me. I’d like to take this opportunity to thank all those I have run with, my coach, nutritionist, physio, family and of course the readers of my blog 

As I reflect back on the 15 months preparing for Sunday, I have realised it has been an absolutely cracking journey. The friendships I have made through this time will last for many a year and all due to a common love for putting one foot in front of the other relatively quickly. To say I am nervous and apprehensive about the race is an understatement. I think it’s only natural to have these feelings, as the marathon distance means so much to me and has come to really form part of me. My hope is that I can do myself justice and finally perform to my ability, so that once and for all I can show the world how great a runner I am!

I’ll be lining up on Sunday, a matter of a few meters behind some of the greatest marathon runners to have ever existed. Haile Gebrslassie, my all time running idol is pacing the race. To run near the great man himself will be a dream come true for me, as well as to see him with my own eyes! The Olympic champion from London 2012, Stephen Kiprotich is running, Wilson Kipsang the world record holder, Geoffrey Mutai the holder of the fastest marathon ever run, as well as Tsegaye Kebede and Emmauel Mutai, the list is endless. Apparently there is also some guy called Mo Farah making his debut, who knew?

Nick’s tip of the week

Rest up now and be fully rested for the big day on Sunday! I don’t want to see any of you making the schoolboy error of trying to make up for missed runs and injured periods during your training. Now is the time to ensure that your legs are fully charged like a battery; let’s just hope our legs last longer than the iPhone battery does (other mobile phone makes are available, with longer battery lives as well).

Races around the World

Well the Paris Marathon took place on the weekend with Kenenisa Bekele winning the race in 2.05.03 on his debut at the marathon distance. Bekele won the Great North Run a few months ago when he held off a late charge from Mo Farah. The women’s race was won by Flomena Cheyech in a time of 2.22.41.

The Brighton Marathon also took place on the weekend with William Chebor winning in a time of 2.09.25. Congratulations to Rob Curtis who completed the marathon.

For those requiring a lesson in how not to run an event, search the internet for the story of the Sheffield Half Marathon…they essentially didn’t manage to get water at the water stations and so cancelled the race, at least officially!

Quote of the week

“When you recognise and fully understand the difference between being the best and being your best, then you can truly enjoy and embrace the marathon.” The Marathon Man, November 2008

Look out for number 660 on Sunday, the man with a running plan…here’s my final thought:

“Fee-fi-fo-fum, one day I’ll run faster than anyone”

The very best of luck to all those running this Sunday, you have to believe it to achieve it!