The Greatest Race on Earth…daring to dream… 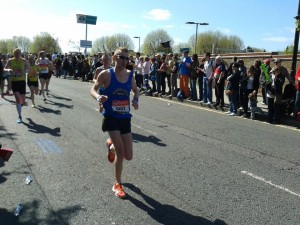 So this week’s blog is going to be somewhat different to the rest. It is the last of the London Marathon series of blogs and indeed will be my last blog for a while.

The Greatest Race on Earth took place yesterday and it did not disappoint. The men’s elite field was full of the best names in world marathon running as well as including some new debutants. Much of the hype pre race surrounded Mo Farah and the public expectation on his performance. Even at the start of the race when the athletes were introduced to the public, there was a mighty hoar as Mo’s name was spoken over the PA system.

Mo decided to run in the 2nd group of elite runners and this would arguably be his biggest mistake in his 1st marathon. The pre race talk of Haile pacing the elite men through in a ridiculous slow 58 minutes did not materialise, nor did Haile at halfway; Haile dropped off the front pace shortly before halfway. Mo could have done with being with the front running group for the experience and test if nothing else.

The eventual winner was Wilson Kipsang in a course record of 2.04.29. Wilson even managed to negative split on the day, a worthy champion and winner by all accounts. The women’s race was won by Edna Kiplagat in 2.20.21. Edna out kicked Florence Kiplagat in the final stretch of the race down the Mall.
Mo Farah would eventually finish in 8th position in a time of 2.08.21; a very respectably time but over a minute outside the British record which he was aiming for.

As I am writing this blog I am saddened to read that a man from Leicestershire who collapsed after finishing yesterday’s marathon has died in hospital. My thoughts and prayers are with his family and friends at this very difficult and sad time.

So many of my friends ran yesterday and it would be foolish of me to try to name them all for fear of omitting someone. Congratulations to all of you and well done on your respective times. Each marathon brings with it a personal and unique story which I could not do justice to any of you.

For me personally, the London Marathon has been the target race and dream of the last 15 months of training and indeed my life. Having run in excess of 2,500 miles in this time, got through 5 pairs of trainers, had numerous physio and massage sessions and dedicated my time to the pursuit of my dream the scene was set.

Conditions looked ideal yesterday morning. The sun had come out to play but there was still a little breeze and humidity was not high…all looked well. After a perfect pre race fueling regime, which I have practiced every Sunday morning for as long as I can remember I found myself 2 meters behind the start line at the Greatest Race on Earth…what follows is the story of my 23rd marathon…

I felt good and reached for gel number 1 as planned and inevitably I had to slow the pace slightly in order to take on the gel, but I stayed relaxed and a 6.07 wasn’t a disaster…getting the gel on board was more important. Mile 10 and 11 came and went and 5.59 and 6.01 were respectable times and not far off the target pace. A slightly slower mile of 6.09 was concerning to take me into mile 12 and again I reached for a gel as planned and I couldn’t get back on to the pace. A 6.26 to take me into mile 13 and the plan was falling apart.

I went through hallway at 79 minutes but the race was slipping away from me. I attempted to regain composure for the next 2 miles until mile 15 but realised that it was all over in terms of the dream finish time. Although I don’t remember making a conscience decision to slow up a bit and soak in the atmosphere and embrace the marathon crowds; that is exactly what happened.

I started working the crowd and clapping them back for their awesome and fantastic support. Indeed there were so many people out on the course supporting me personally and I want to take this opportunity to thank you for all your efforts. I handed my gel belt to a young lad at mile 20 which brought a smile to his face. Indeed down the Embankment I discarded my sweatbands in a manner more accustomed at an end of a tennis match at Wimbledon…the crowd responded well with amazing and outstanding support…I asked and London gave, for this experience I will be forever grateful. Externally I appeared to be a man embracing and enjoying the unique experience of a city marathon and perhaps the best city marathon in the world. Inside however I was devastated and distraught of not achieving my aim and dream.

I turned the corner by Buckingham Palace to finish down the Mall in a time of 2.48.59. By all accounts not a bad time, having taken my foot off the effort at 15 miles, and indeed my 2nd fastest marathon however I came into the race in awesome fitness and better than I have ever been.

I dared to dream of greatness and of a dream that was beyond me on the day. As I walked with my bag to the meeting area to join my family and friends the tears streamed down my face, not for any physical pain but because I’d failed in my dream to achieve marathon greatness and I realised at that point it was ok…it was ok to fail, it was ok because out of failure comes greater determination and fight indeed I feel like my marathon journey has come full circle. I didn’t finish my 1st attempt at running a marathon, 9 years ago, I dropped out at 20 miles and that great disappointment has been the driving force of my running ever since. As I walked towards the meeting point a fellow marathon runner (who I didn’t know) looked into my eyes and I looked back into his and with no words and no break in my walking he held out his hand and we shook hands (in the friends way, not the formal straight handshake…is there a name for this?). In that moment, I felt a great release, that this man understood and it was ok, no words were required and no words were spoken but it was ok.

That’s my story of my 23rd completed marathon and now you know that there are 24 marathon stories that I hold. The words of encouragement and support have rolled in from those around me and I am forever grateful. Running is my world and means everything to me and so when things don’t work out it hurts. To be told by my friends that I inspire them stirs up great emotion in me.

So from a former world record holder, 23 time marathon runner and a man who dared to dream I leave you with a final quote:

“There is no shame in striving for greatness! If people aren’t laughing at your dreams then you haven’t set the bar high enough.” Nick Twomey, 13th April 2014