Welcome back to Nick Twomey’s running adventures and to my blog…it’s been a few months but I thought I would post a blog today!

It has been a turbulent few months for my running with life’s demands taking its toll on my ability to get out and train as much as I would like. That all said I’ve still posted a modest half marathon PB back in May and taken part in number of road races over the summer period.
I ran the Henley Half Marathon today having previously taken part in the race two years ago. The course is a tough cookie to crack as it is mainly flat until about 8 miles when there is a big hill for 1.5 miles…see the picture below: 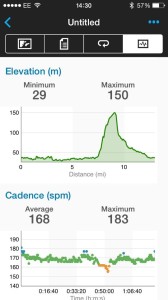 I went into the race this morning with fresh legs but lacking some fitness after not having the time to train very much in the last two weeks. I knew that a good finish position was possible if I could perform to my ability. I led the race out over the first couple of minutes or so before settling into 3rd position and working my way gradually into 2nd after about 2 miles. The leader was storming ahead and I did not want to make any mistakes with my pacing and get dragged along too fast so I was content to let him go. I stayed comfortable and strong all the way to 8 miles when the incline started where I had planned to ease off and not work too hard in order to have a fast stretch over the last 3.5 miles and I did as I planned. In doing so 3 runners went past pushing me back into 5th place; my hope was to catch back up on the downhill and flat.
Sadly for me the overtaking runners were too strong and I left myself too much to do to catch back up and perhaps reflecting back I eased off too much going up the hill stretch of the course. Nevertheless I finished in 5th position knocking well over a minute off the time I posted two years ago! 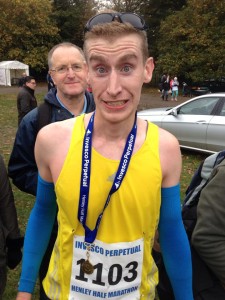 Incident to learn from

There was one incident that did however disappoint me during the race. At about 7 miles when coming up to a water station the volunteer officials were not holding out the cups of water opting to leave them on the tables. While this of course is not ideal for us runners as we want to not really slow down the abusive profanity directed at the officials from one runner was grossly inappropriate. I have no idea why but I promptly piped up and said “gents, I know the officials didn’t do the most helpful thing but let’s stay polite” and to my surprise instead of receiving some abuse all 3 runners around me (including the offender) agreed. I think in the runner’s defence he just got a little carried away but I think there’s an important lesson to be learned from this…volunteers are volunteering, they are trying their best, they don’t always get it right but nevertheless we should all treat each other with some respect. Rant over.

I wanted to take the opportunity of posting this blog to highlight a truly inspirational and legendary runner who I have been honoured to run with and be a member of the same club with. What makes this man even more remarkable is that I was completely unaware of his motivation and story until recently. I will never be able to do his story justice and so I would invite you to visit this link to read more about him… http://www.channel4.com/news/stillbirth-rates-nhs-mums-mothers-births-west-midlands

In memory of his daughter Amber and to raise money for Tommy’s, the baby charity he ran the Royal Parks Half Marathon today BAREFOOT and my sources tell me not only that he finished but he finished in 1 hour 32 minutes…flipping heck! The nicest and most genuine man you will ever meet and to me someone who I look up to, both literally (he is very tall) and metaphorically. If you would like to sponsor Duncan there is still time at… https://www.justgiving.com/AmberMallison3

I wanted to plug a motivation song that I like at the moment by The Script called Superheroes, give it a listen.

Also wanted to recommend a book I’m halfway through called The Ghost Runner by Bill Jones. The book tells the story of John Tarrant, well worth a read.

Well done to all those who ran, raced or rested today…keep living the runner’s dream!