The race that rekindled my love for running: Muckletoon Half Review

We all go through peaks and troughs when we train. Moments when you feel strong, on form, and eager to train and moments when you’re off your game and can’t find the motivation to put on your kit and head out the door. Ever since running the Brighton Marathon I’ve been in a trough. Giving myself some time off to recover turned into two months of very little running. My mojo was gone and whilst I missed running, not even treating myself to a new pair of trainers could motivate me to get my butt out the door!

Back in May I signed up to the Muckletoon half marathon with Jenn, 13 miles of trail running in Scotland as part of the Muckletoon adventure festival, a weekend event of trail running, mountain biking and walking. The race entry was cheap (£18) and as Jenn’s parents lived nearby it sounded like an ideal weekend away and a target to train for post-marathon after our plans to run Helvellyn fell through. Taking place on the 20th June I had time to put in a few long runs and a few hill sessions to get me in shape.

With all my good intentions, that training didn’t happen and I was heading into this race having run no more than 5 Km a week for the four weeks prior.  When a couple of days before the race Jenn sent me a map showing a 1000ft climb in the first 2 miles I started to question what I was doing. When we were driving to the start line and Jenn’s mum pointed out the hill we’d be running up, which you couldn’t see the top of due to the mist, I knew I’d gone insane. I’d come this far, I couldn’t back out now, could I?

We got to the race HQ (or basecamp as it was called) where we were shown where to pick up our race numbers which was straight forward. One thing I was very pleased about was the number of toilets available and not just port-a-loos either! Big thumbs up there. There were a few stalls scattered around selling cycling and running gear and a main stage with some trial cyclists showing off what they could do. The whole event was smaller than I expected but the atmosphere was lively and the cyclists were distracting me from what I knew was about to come. 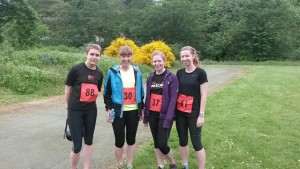 The first mile of the race was easy and flat. I ran along with Jenn and her mum, there was general chatter and I was feeling good. Then we rounded the corner into the town where the pipers were playing. This marked the start of the 1000ft climb to the monument. I was only a few yards up the hill when I decided to save energy and walk, letting Jenn and her mum head off in front. I kept them in my sights as I was slogging up the hill, thinking to myself that I wasn’t that far behind and I could catch up with them on the downhill and straight. Quads burning I reached the top, but Jenn and her mum were no where to be seen! At this point I decided just to enjoy myself, not worry about catching anyone up or what time I finished in. If I needed to walk I would, plus the views from this height were stunning so it would have been a crime not to take them in fully! 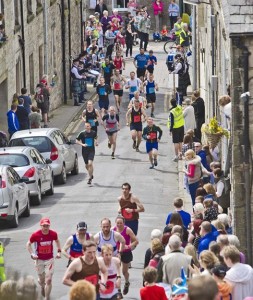 The downhills were hard and technical, and there were another couple of shorter hills that left my quads burning. My London running has definitely not prepared me for this kind of race, yet I was smiling and dare I say it, actually having fun. The marshals around the course were all very friendly, greeting me with smiles and words of encouragement to push me on. The water stations were well equipped with plenty of water (caps off at the ready!) and jelly babies for an energy boost. The course went over hills, tarmac, gravel, through woods and along bridle ways and rivers. It was about 9 miles in that it suddenly hit me that this was the reason I loved running; just being outside, heart pounding, the fresh air, and the free flowing thoughts. All of this I’d been missing on my two months off, and I really had missed it! 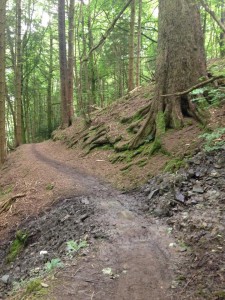 2 hours and 28 minutes later I crossed the finish line. Performance wise, it was probably my worst race to date, yet it is the race I’ve probably enjoyed the most. I could have easily hated every second, with the hard terrain and lack of preparation but with the pressure to do well taken off I managed to remember why I fell in love with running in the first place and I’m just itching to get my running shoes back on! 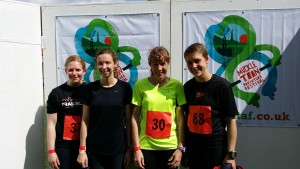