I was looking to take on a memorable 40th birthday challenge and when I came across the website for Rat Race’s Man versus Mountain I knew I had to do it. Taking place on 6 September 2014, a day after said 40th birthday, it was a 20-mile race from Caernarfon to the top of Mount Snowdon and back down again, finishing in Llanberis. ‘I can do that’, I mused from the comfort of my warm, comfortable flat nowhere near Wales or any mountains whatsoever. 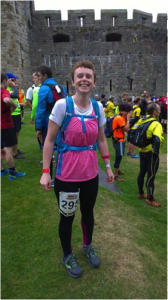 Fast forward some months later, after a summer of running up pretty much every hill I could find in London, doing as many hilly trail races as I could and uphill treadmill running, I was as ready as I would ever be. With a week to go I succumbed to the usual pre-race hypochondria and managed to convince myself that I had pulled muscle in my stomach, developed a kidney infection and had a puffy foot…of course, none of which was true!

At 8.15 on race day I found myself lined up at the start inside Caernarfon Castle. Surrounded mainly by hardened fell runners, my fellow ladies and I were definitely outnumbered – it is the only time that I’ve seen more of a queue for the gent’s toilets than there was for the ladies’! It was the strangest start to a race I’ve ever experienced: being a historic building and all, we weren’t actually allowed to run through the castle grounds, so after the countdown we all filed along in an orderly fashion through a small door where we were timed out and the running began. 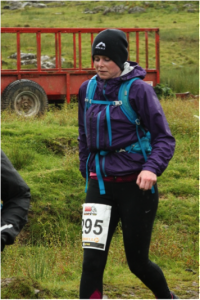 After less than a mile the climb started and the next eight miles to the first pit stop were pretty much a steady uphill slog, but this is what I had practiced for and I felt good. Around mile two, I found myself running with some other ladies (three lovely nurses from Cambridge) and I became an honorary member of their team. We passed some stunning scenery, lots of horses and a fair few mountain goats along the way. After a quick stop to check in at mile eight and scoff some flapjacks, we carried on. A few more miles of incline and the trail levelled out a little for a good run to the foot of Snowdon, then the path to the summit became far too steep to for us to continue running.

Running through the Welsh countryside

This was the bit I hadn’t been particularly worried about…those first 11.5 miles uphill had haunted my dreams but I imagined that the 1.5 mile hike to the summit would give me a chance to recover. I couldn’t have been more wrong! Never underestimate a mountain. After half an hour of relentless climb we weren’t even half way, my legs were like jelly and I found it hard to catch my breath. I had done some core strength work but this is definitely something I need to work on as my back ached considerably. And although, for Snowdon, we were very lucky with the weather, I was incredibly cold! It became a case of just putting one foot in front of the other and plodding on. It was great when people passing on their way down started telling us we didn’t have far to go.

On reaching the summit the joy was immense! We checked in with the marshals then got a fellow racer to take a group photo. It was after midday and although some people headed straight back down after getting to the top, a fair few of us had a cheeky stop off at the café. We enjoyed the fabulous views and indulged in tea, sausage rolls and a bottle of coke. It was then pointed out that my lips had turned alarmingly blue so I changed into a dry top and we set off back down the mountain. 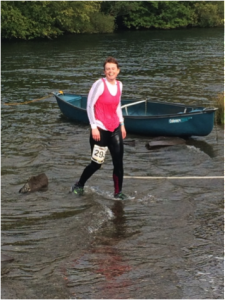 At the top with my adopted team

My legs were tired but it was good to be running again! The path down was wider; it was still steep and rocky but definitely runable. I started to warm up and even felt a little bit bad ass as we ran down a mountain with our back packs on, past bemused hikers who cheered us on. We even got propositioned and asked what pub we were going to when we finished (who needs Match.com)!
At around mile 16, we had reached the outskirts of Llanberis and were able to offload our backpacks for the final leg of the race. We ran to an old abandoned quarry where the cruel, cruel people at Rat Race had included a timed vertical kilometre up some steep steps and through parts of the quarry. I managed to get up it in 20 minutes, which was a poor show but then I had just been up a mountain (the fastest lady round the course completed this bit in 12 minutes…respect!).

Next was a downhill run through the woods to the abseil. This was the bit I was dreading. I got myself kitted out with a harness but was in tears by the time I got to the front of the queue. Luckily the very lovely people running the abseil were used to dealing with criers so they coaxed me gently over the top, which was the worst bit, and by the time I was halfway down I even started to enjoy it…only a little bit though. 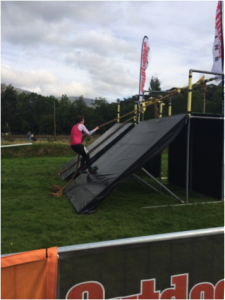 It was late afternoon and a bit muggy in Llanberis at this point so I was looking forward to the water challenges. I swam through a lake at the bottom of the quarry, undertook various water obstacles (think Total Wipeout) and there was a further swim across a river before the finish. My family and friends were on the other side of the river cheering me on. Then it was the last 500 metres to the finish line. As I mentioned before, the Rat Race people are a tad cruel ☺ so there was two six foot walls and a slippery slope to get over before I could cross the line and get my medal. Luckily a gang of fellow finishers helped me over the walls (at 5ft3 there was no chance I was getting over those on my own!).

At last the finish line was just ahead of me and I managed to put in a burst of speed to cross it tiredly but triumphantly. After I had collected my medal and joined my cheering squad, my sister in law produced a bottle of champagne and some plastic glasses…it was the best champagne I’ve ever had in my entire life! It took me 7 hours and 26 minutes in total to get round the course. It was hard but amazing and definitely a birthday I will never forget! 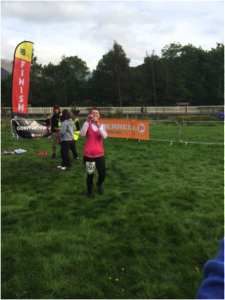 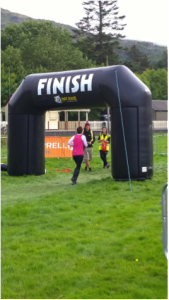