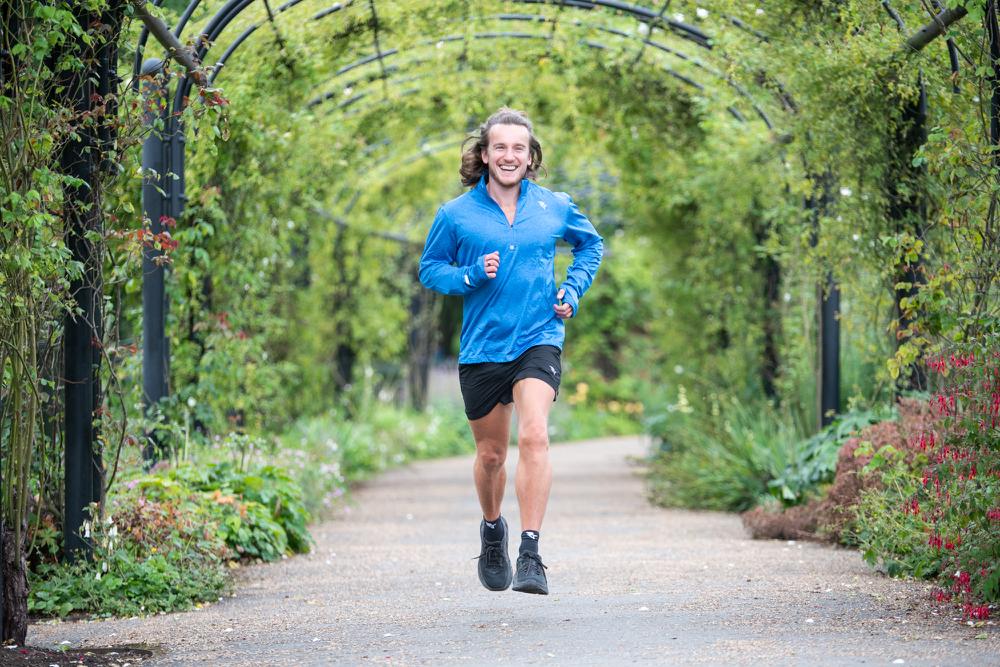 What does running mean to you, and how did you get into running?

I got into running at a young age through a combination of being naturally quick over the sprints and having a father (2.30 for a marathon and current North of England Athletics Chairperson) who loved running. As well as playing football at a high level regionally I competed over all distances until specialising in middle distance at around 14 years old. I won my first national title over 800m in the u15 category, I won my second national title in the u17 category over 1500m setting a British record which lasted 10 years. I then competed for my country twice over the next two years in Europe, winning on both occasions.
I then went to Loughborough University on a sports scholarship, where my time was plagued with injuries before finally ending with a broken femur, I spent my final year on crutches for the most of it. It was during this time I became heavily involved in the behind the scenes of running, I was Loughborough Athletics Club Chairperson (at the time the largest athletics club in the UK) where I was exposed to organising athletics events, social events (at some venues we hold races at today) and spending time making lots of friends in the athletics world.
Running for me now is my release, my meditation and my passion. Competing at a level that will satisfy me is over….I think.

When did you start with RunThrough, what is your role?

I co-founded RunThrough in 2013 with Ben, who was the year above me at the same university, where we became good friends. Between leaving university and starting RunThrough I’d worked for companies like UEFA, Great Run, London Marathon in the UK, Europe and Australia. I’d also created and sold two different businesses and failed at another couple. When I sat down with Ben I owned the UK’s busiest athletics website along with a web development company specialising in creating websites and online marketing for mainly pharmaceutical companies, both of which I continued working on until around 2016 alongside RunThrough until Ben quit his full time job in a senior position at Unilever, and we both went all in on RunThrough.
My role day to day now would probably be making sure we are all moving forward as a team and to make RunThrough better for everyone in the community, but both Ben and I have done every role within the business at some point.

What do you love about RunThrough?

I love the different types of personalities that attend the events and that we communicate with on a regular basis. It’s so rare to do something where so many different  types of people from different backgrounds come together to compete on an equal footing like we do at running events.
I also love that through the various elements of the community we get to help people start and improve their own running. For me it’s easy because I genuinely love running, it’s in my DNA. So organising encouraging others, making new events, creating new products or just watching running events will never be a chore to me.

What is your favourite RunThrough event, and why?

Hampton Court Palace Half Marathon will always be my favourite, the growth (and fear) I felt through the staging of that first event in 2015 can never be replicated by anything I can see myself doing right now.
Taking on a challenge like that allowed Ben and I to really show our unique strengths to each other which I think has stood us in good stead for the 5 years since.

What 3 top tips would you give runners, that you have learnt over the years…

1. Don’t do too much too soon – Running is a lifestyle, take it easy, the results will come in time.
2. Stretch, every day – I wish I gave myself this advise 10 years ago!
3. Push the boundaries you have for yourself while you are able to – No matter how old you are, there are always marginal gains to be made, own them and be proud of yourself.

What would you say to anyone coming to an event for the first time?

Get there early. Even if it means going for a walk, or sitting in your car. You don’t need to rush for the sake of an extra 20 minutes in bed. You never know what can happen on a journey to an event or what the event has in store for you.
You can only try and plan for everything, sometimes someone else has plans for you.

What is your proudest moment?

I find it very hard to be proud of myself for long. Even when I was younger and I got my medal after a race, I’d always hide it or throw it away. There is always something else to drive for and I feel being proud for too long means being potentially complacent. However, the moments that stand out are in running are winning my national titles and pulling on my national vest. Also seeing my sister break 3 hours for the marathon for the first time (she’s done it a few times) while my dad and I screamed at her on route, I was contracting for London Marathon at the time so got myself on the course and literally ran next to her for bits of it.
Not in running it has to be seeing the RunThrough team and community come together over the last 7 years, there are so many beautiful humans that has made the journey so far so much fun, I can’t wait to see what the next 7 years will bring!

What are your current running/sporting goals?

I’d like to try every type of endurance event. I’ve done all the distances on a running track road running, fell/mountain races, marathons and triathlon so I would like to try an ultra marathon and if I can get my body strong enough, an ironman triathlon. The reason being I can’t run fast anymore due to injuries, and even if I did it wouldn’t be as fast as I could have done when I was competing at a high level, so now I just want to participate and enjoy being involved in endurance sports.

I have been to over 60 different countries (not including islands), about a third of the world, in just over 30 years. Hopefully I can see the other two thirds in the next 60 years!!
To see what Matt’s up to give him a follow on Instagram, @Mattwoodywood