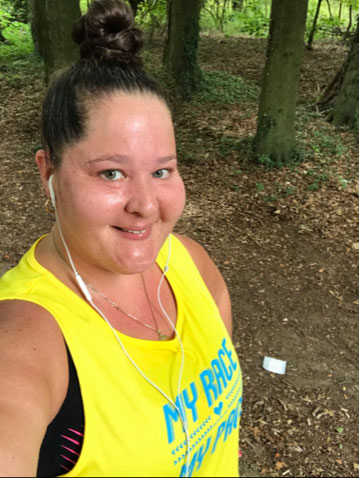 My name is Alison, I’m 43 and I live in Hampshire.
I was approached by the lovely Lucy about writing my running journey so far after posting my first post on RunThrough UK chat group on Facebook about how I completed the Newbury Racecourse 10k, my first 10k, as in 10k just running!!
I never really enjoyed running all through my childhood, I was that overweight kid (still am) who dreaded athletics for PE as I was always last!!!
I’m a member of a bootcamp that was doing a Brutal Event in March 2015, Windmill Hill!!

This was in memory of a members son who had suddenly passed away and we were raising  money for SUDC (Sudden unexplained death in childhood). There was no training specifically just had a jog on a Friday night for a month or so leading up to it with a few others.

I did it and it was hard, harder than I imagined, 10k of adulterated hills, uneven terrain and lots of mud and water!!
I got it done eventually in a time of about 2hrs 10mins. The buzz on completing it was amazing so I decided to start the couch to 5K, gave up after a couple of weeks as no fun on your own!!!
That August a friend from the bootcamp invited me to do 10k Morunner around Swinley Forest and I did that in 1hr 46. I never trained or did any running at this point just Bootcamp so basically just winged it on the day. All this time I was about 19 stone!!
I did a woman’s only brutal in 2018, just a 5K again same friend and just winged it as I had done nothing in a long long time running wise. Wouldn’t even say it was a run!!
December 2019 I decided enough was enough and I wanted to do more than just my twice a week bootcamp and also embark on a lifestyle change to healthy eating. I lost a bit of weight so started the couch 2 5K on 9th March 2020 and completed it 29th May 2020.Even treated myself to a new running watch Garmin Forerunner 35 and a pair of decent trainers Gel Kayano 26 Platinum, they were beautiful, white and rose gold!!! Didn’t stay beautiful very long!!!
Having completed that I needed something to focus as I was going out doing a mile or 2 with no genuine focus. I then decided that throughout July I would run 50 miles and raise money for our local hospice, St Michael’s in North Hampshire a place very very close to my heart.
My cousin passed away there 27th March 2018 from a brain tumour very shortly after diagnosis 1st December 2017 aged 41.He had learning difficulties but lived as independently as he could in supported living with the help and support of my aunt and uncle and all the family. He had a part time job at the local Morrisons.
Not once did that boy complain about what was happening to him even when by Christmas he had lost his sight. Never did he even question then. That’s the kind of strength I was so jealous of home for and his bravery. 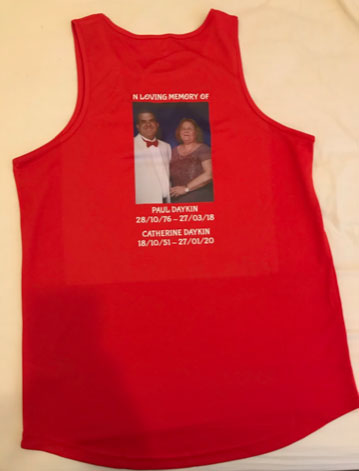 His mum, my auntie had a terminal condition called idiopathic pulmonary fibrosis and she sadly passed away at the same hospice 27th January 2020 less than 2yrs later.
So that’s my why for running the 50miles throughout July.
God I found it tough as a newbie runner, even nearly giving in as running everyday was taking its toll as well as doing bootcamp, I was in so much pain  but I had to think why I was doing it and that’s what kept me going and I know my cousin and aunt would be so proud of me.
From sharing my couch to 5K journey on my Facebook and sharing the journey of the 50miles and even uploading videos after each run that I also shared with an amazing community running page Run mummy Run I managed to raise just over £1k for the hospice also at a time when their fundraising was limited due to COVID restrictions.
After that I just plodded on lost my way a bit, even so soon I would go out run a mile and had enough and go home.
I literally ran 19miles between August and November!!!!
Run mummy run started a virtual event Winter Woodland advent challenge to run 24mikes between 1-24 December so I signed up and got that done.
I need another challenge so I decided to enter the RunThrough Newbury Racecourse 10k and stated my 8 weeks training. I literally printed off a piece of paper I found online and followed that ticking it off each run, very old school. I never missed a training session and I went out 3 times a week also was still doing videos!
Obviously the news came that due to COVID the race had to be cancelled and that we could reschedule or run it virtually.
I was doing the training so I thought I’m still going to do it on the day virtually. My friend, another runner friend signed up with me but she was doing the half and I asked her if she would come out with me in race day and she did. I don’t think if I was on my own I would if finished it!!!
The first 4.7 miles I hardly noticed then the negative thoughts started plus the fact my toes had gone numb on my right foot and they were really stingy slowly followed by my left foot about a mile later!!! My friend continually egged me on and pushed me and I managed to complete the 6.2 miles in 1hr 27mins. Nearer the end another lady from the run mummy run group was out for her run and even ran the last 1mile with us to keep pushing me as she knew about my training etc.
I was so happy and felt that was my first proper 10k run event.
A week or so before the ‘proper’ 10k I was looking at doing The Great South Run which I am now signed up to on 17th October 2021 with my best friends husband and his mate to raise money again for St Michael’s hospice. I won’t be running ‘with’ them but I hope they wait for me at the end!!!
After being still on a running high from my 10k a moment of madness took over and I have only gone and entered Reading Half Marathon literally 3weeks to the day after The Great South Run!!!
I have the time to train so fingers crossed I am able to achieve both these races and raise a nice amount for the hospice.
My cousin and auntie will get me through and all I have to do is think of their strength and bravery.
Starting to run and joining an online running community is 100% what has kept me going. I’m still working on the mental block I can sometimes get that tells me why am I bothering as I’m not capable but I know as long as I put the work in I CAN DO IT!!!
Best wishes Ali x
If you’d like to follow Alison’s journey, you can find her on Instagram @real_running_by_ali