Andy Walter is a RunThrough regular who absolutely loves a challenge and with his 50th Birthday coming up this weekend – HAPPY BIRTHDAY,  he had to set some tough ones! We’ve asked him to tell us about his running background and whether he completed his challenges throughout the year. 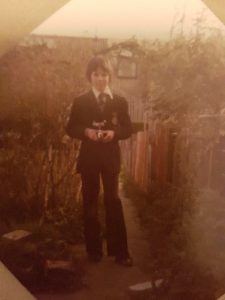 My first real race was at The Harvey Grammar School for boys in Folkestone. All the first years raced each other a 5 miles cross-country  run over and around the hills, and I won! I was 12 and proudly received a tiny trophy at the end of year awards. After that I ran the same inter-house race for the next 5 years and finished runner-up every time. I competed in the Shepway cross-country championships every year and at the Kent cross-country championships 4 times. On the track I ran 1500m races mainly, a lot on grass tracks winning often, and sometimes dipped into 3k and 5k races. I trained with Folkestone Athletics Club for a couple of years (5 miles every Tuesday and Thursday and track work on a cinder track in the army camp on Sundays) and used to scrump for pears on the way home. This was before flapjacks were around!! The teachers nicknamed me ‘Running Walter‘ and I was awarded ‘Full Colours’ for my achievements before I left school in 85 which was nice.

My idol was Seb Coe – I had a scrapbook with all his Olympic triumphs from 1980 and 1984 and followed all his races including the famous 3 world records in 41 days. He should have competed in 1988 Olympics but they gave his place to Peter Elliot – a crazy decision I thought!

I left Folkestone in 1985 and moved to Bromley and stopped running. I cycled a lot and then after dropping out of college after a year started working full time, supermarkets, the courts service, and eventually joined the Met Police in 2004. In late 2008, sometime after my divorce, I applied through work for the London Marathon for a laugh and got it, so I trained and ran the 09 Flora London marathon, and the next year the 2010 Virgin London, both as a smoker, beating my 09 time by 41 minutes in 2010 with a time of 4 hours and 22 seconds as I trained more sensibly for it. I raised over £4000 between the two runs for a charity that helps children born with no eyes or deformed eyes and was lucky enough to meet some of them at the end of the races. Completing these, especially the emotional first, is up there with my proudest life achievements.

I then took a 6 year hiatus and put on weight ballooning to over 15 stone. In Feb 2012 I finally quit my long smoking habit (after my wife found out I still did) and in 2015 after shifting 1 1/2 stone through swimming and diet I was diagnosed with IBS (Irritable bowel syndrome). I took various herbal remedies to heal me inside and started jogging gently again as it helped the symptoms. I then saw an advert for the 2016 Hampton Court Palace half marathon and the challenge was born! I managed to sustain a nasty calf injury almost immediately, rested for 2 weeks, then trained on a treadmill at the local police stations gym for 7-8 weeks during early 2017, and completed it in 1 hr 41:58.

Later that year I ran a 10 mile Tough Mudder and 3 x 10k races, a couple with RunThrough, and the bug bit. Medals and flapjack, it seems, were my new thing!!

It hasn’t always been easy and I have been injured several times this year, relying on the healing hands of expert and new friend Jamie Lloyd to fix my aching calves. My wife Jackie, whom I married in 2011, describes herself as a ‘running widow’ but is grateful to own the remote control more often and is really supportive. But I think I owe her some expensive shopping trips for not seeing much of me this year. My two teenage sons live in Norfolk and I visit them often.

My targets for next year are to be more sensible, try and avoid injuries, and race 2-3 times a month not 5 or 6, and do different things too as well as with RunThrough, though I will run my favourite courses with RunThrough so will be around. I have already signed up to the 100km London-Brighton walk in May as a different challenge. There’s a Supernova run booked and the London Winter Run. I want to be one of the fastest V50 runners and continue to enjoy running. It keeps the weight down – I am now a healthy 12 1/2 stone, keeps the IBS at bay, and the sense of achievement is immeasurable. Running clears my head, de-stresses me, and I just feel better for having hit the road and the parks for a while.

I love meeting people. Everyone is so friendly and positive. There are people at these meets from every walk of life and ability range, and everyone from fellow competitors to the brilliant staff and volunteers encourages them to do better and I love that! It’s a proper community spirit that you don’t find everywhere. As a police officer, who has trained 1000’s of people to become police officers over the last 10 years, encouragement and positivity is the basis of my training when I am in class. 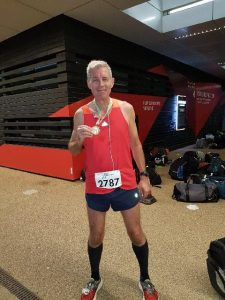 It was a crazy night finally reaching my first goal and getting under 40 minutes for 10k on 13th September at the Chase The Sun race – I could hear Matt on the microphone yelling the time out and he was as pleased for me as I was. I hardly slept that night and it is right up there as one of my best ‘runners high‘ moments. I had planned to beat 40 minutes at Battersea on November 18th – a week before I turn 50, and this came out of the blue, so was even better. On the first Chase the Moon this month I ran 19.19 for 5k, reaching my second goal, then bettering it to 19.03 four days later at the Movember run in Battersea Park. Can’t believe that through RunThrough I am running these times at my age, it’s fantastic! How mad would it be to go sub 19 for 5k, sub 39 for 10k, aged 50?

I love reading everyone’s achievements on Runthrough chat and have made some lovely friends. It honestly doesn’t matter how good you are, just get out there and do it. Come rain or shine, or in the case of Wimbledon CTS in August – come lakes of muddy puddles and wet wombles! Just do it. That was one of my favourite runs of the year because it was so crazy to be that cold and muddy – in August! The bath looked like I’d washed the dog afterwards!

Can I also take this opportunity to say a massive thanks to all the organisers and volunteers who turn up hours before we get there, set it all up, keep us going, cheer us on, look after our valuables, take hundreds of pictures, and then clear up afterwards sometimes in terrible weather. Without you guys none of the above would be possible so thanks a million. You are wonderful and heroes to us all. We just do the easy bit.