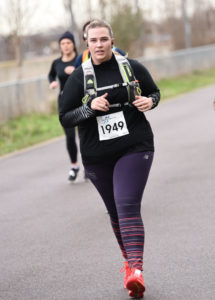 I’m Cassandra originally from South Africa but now live in East Village, Stratford right on the door of the Olympic Park which is where my love of running started. I started doing the couch to 5k program in the summer of 2015 to help increase my fitness and lose weight. I progressed to doing some 10km run/walks but wasn’t consistent with doing it, I don’t think I really thought that I could do anything more.

I knew I was never going to be a super fast runner but I am still a runner and there was still a small part of me that enjoyed it every time I went out for a run.

In April 2017 I entered the ballot for the London Marathon not really expecting to get a place (I think I did it as more of a joke really), little did I know it was all about to change. The joke was clearly all on me! In October 2017 I had a magazine pop into my mailbox that said I had a place in London Marathon 2018. I was up for the challenge, found a program and started my training in December 2017.

During my training I never thought I would do another marathon my motto being I will have done a marathon. During this training block I lost one of my closest friends to suicide and running became a solace during this time. On the 22 April 2018 I was on the start line of what was going to be the hottest marathon on record, it was a hard, long day. On crossing the finish line I knew that would not be the last marathon I ran and I would be back to conquer the distance. I entered the ballot again. Running was slowly changing my life; I missed the days when I didn’t get to run and not to forget the absolutely amazing people I have met while on this incredible journey!

I didn’t get a place in the ballot to no surprise and had applied to run for charity but didn’t get a place either so I decided to find another marathon for the Spring and signed up to run Paris Marathon on 14 April 2019. I got myself a running coach and started the training. In January 2019, I got an email from Mind Charity to say that they had places for London Marathon I jumped at the opportunity. Only then did I realise that they would be two weeks apart.

On Sunday 14 April I ran Paris Marathon and was able to get a massive PB taking almost an hour off my time from London it was a massive high for me and knew that all the hard work had paid off. I spent two weeks recovering and on Sunday lined up for London Marathon, what an amazing marathon it is. I finished it a couple minutes slower than Paris but was on an absolute high, I had just finished two marathons in two weeks when only a year ago I had taken on my first marathon. Sometime pushing yourself outside of your comfort zone is the best way to challenge yourself more that you expect. 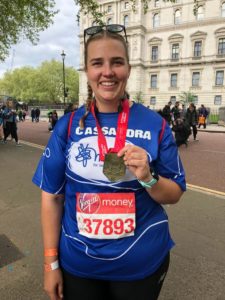 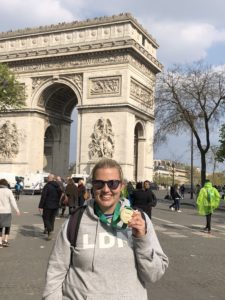 There will be no more marathons this year, that doesn’t mean running isn’t on the cards. I plan to conquer many more 5km, 10km and a half marathon in October. Clearly though I needed an extra challenge for 2019 so am taking on the London Classics later this year. I have started planning my goals for 2020 and thinking about what marathons I can take on. Not bad for someone who 4 years ago couldn’t run for more than a minute