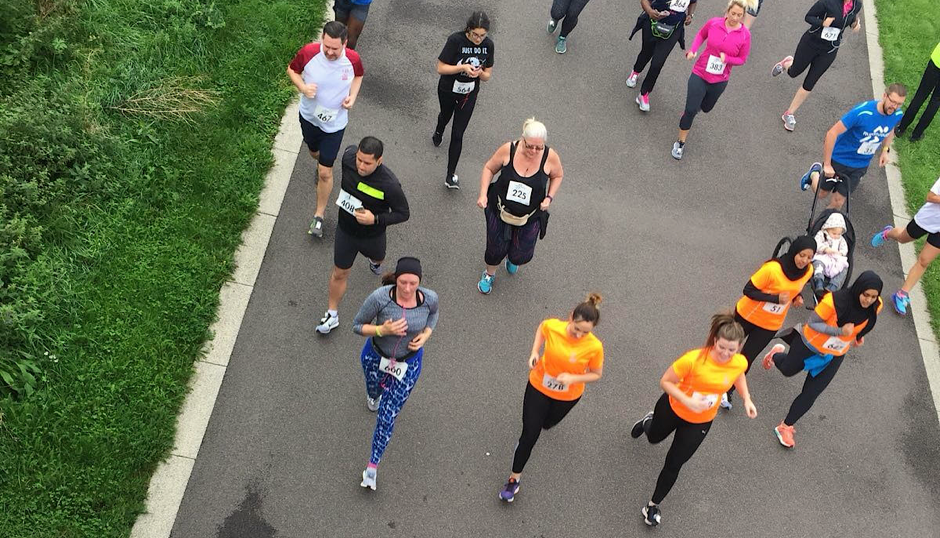 Whilst looking for inspiration on the net, I came across the NHS Couch Potato to 5k in 9 weeks programme. I looked at it on and off for a few months really, but was scared to take up the challenge as I thought there was no way I could ever achieve it. However, as I begun walking further, often aiming for 10 miles per day, I began to feel a bit more confident, particularly after reading some of the success stories on their website.

Anyway, 9 weeks ago last Saturday I begun the challenge!

It involved running for 1 minute with 90 second walking intervals in between for a total of 8 minutes. I seriously do not think I have actually run anywhere for over 20 years, so let me tell you, I found it exhausting. But I did complete the 8 minutes and then continued with the suggested 3 runs a week, building myself up for my first 20 minute run in week 5.

When I got to week 5, I was terrified I wouldn’t be able to do it, but I also began to recognise a determination in me that I don’t think I’ve ever experienced before, about anything. The gradual weekly progress and confidence I began to feel felt great and I loved the fact that I could just sneak out the front door, leave the kids, dogs, husband and everyone else’s demands behind, put my headphones in and run off into my own world… It felt so liberating! I was amazed that I was able to keep going at times, even though my legs felt like jelly. My family were shocked when we went away to Italy in the Summer and I insisted on having to continue with my running schedule.

Although the programme is called Couch to 5k, the main aim is to get you to a level where you 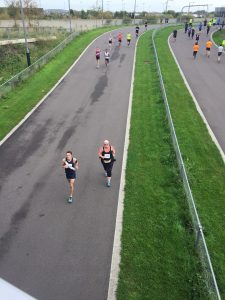 can run non-stop for a period of 30 minutes or more, which I was doing by week 9! According to my fitbit, I was also running 4.5k in this time. I therefore decided, as a way of celebrating my completion of couch to 5k, I could undertake my first proper run with a 5k challenge and so entered the 5k race at the Velodrome organised by Run Through. I half considered not telling anyone and just going off on my own on Saturday morning, but decided to tell my husband, who came alone with one of our kids to support me.

I was feeling fairly confident and, although I do not run fast, expected to get round the course in 40 mins max. Well, no sooner did the event start that I knew I’d completely underestimated it, it seemed to go straight into an uphill climb, that seemed never ending and I immediately felt I was struggling. This felt even worse when it was obvious that every other runner taking part was passing me by. I did consider throwing in the towel, but one of the things I’d gained in the weeks leading upto this, was the dogged determination to just switch off from everybody else and just keep going and that’s what I did. 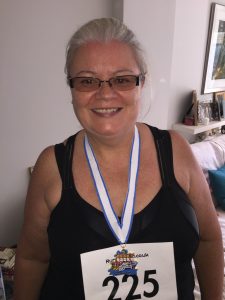 An agonising 55 minutes later, I managed to cross the finish line, to the applause of my husband and daughter, who felt so proud of me! I couldn’t actually believe it myself that I’d finished it and it felt great in someways that it was more of a challenge than I’d expected. But I did feel a little downhearted when I looked at the results board and there I was, at the bottom. However, I have also felt on a bit of a high since doing that 20 minute run over 4 weeks ago and so on Monday morning I was straight out there again, realising that I can actually now run much further than I ever have before. The previous week I’d done 1.5 laps around my local park, but on Monday I pushed myself and completed 2 full laps. Next week I aim to up that to 3, which will be about 6k.

I have actually begun to love running, the individual challenge and sense of achievement feel wonderful. I’ve also begun to believe that I can actually achieve my goal of getting fit! Although I haven’t really lost any weight since taking up running, I feel much more confident in who I am and what I can achieve.  It was great running round and hearing other runners encouraging me on at the Velodrome last Saturday and I hope that it will be the first of many events for me.

To anyone out there that wanting to take up running, but feeling anxious. Give it a go, the Couch to 5k programme really is a fantastic tool to help you get there!

You can find the programme here: http://www.nhs.uk/Livewell/c25k/Pages/couch-to-5k-plan.aspx