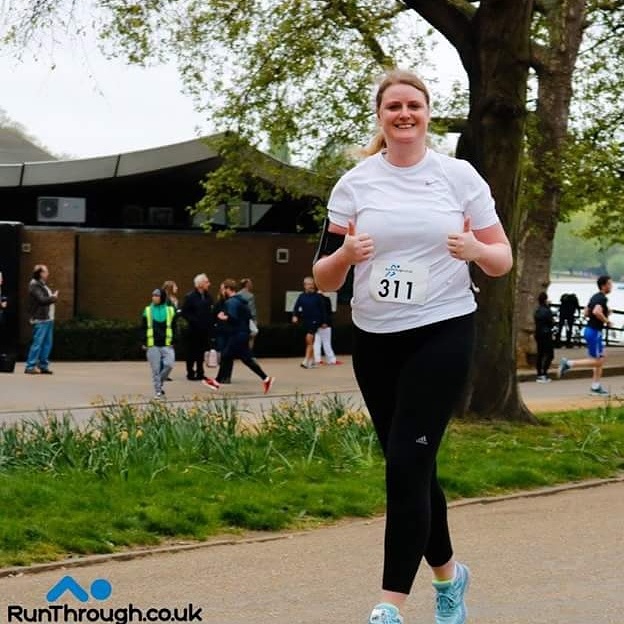 Helen Goddard first found RunThrough via Facebook from a hospital bed. She vowed to run one of our races, and has since collected 11 medals with us. She tells us her story…

Name: Helen Goddard
Age: In complete denial and butthurt of being 40.
Location: East London
Favourite distance: 5k, my body struggles with a 10k
Favourite running shoe: Always New Balance and now On. I alternate between the two.
Favourite clothing brand (for running): Pretty much in adidas. They provide the best length for my shape and height.

I first saw a RunThrough race on Facebook from my hospital bed in 2015. I was recovering from my second invasive surgery for stage four endometriosis. I vowed to myself that if I ever got well enough to exercise again, I would run one of those races. I lost my relationship and my hope all went out the window. Four months later I was back in agony, my daily cocktail of painkillers just to get myself to work and through the day increased dramatically. My life had been on hold and in a complete brain fog for four years. Different drugs and chemicals pumped into my body to suppress the very things that make me a woman. I overdosed accidentally so many times through that fog.  The weight gain, the chronic fatigue, all of it made me want to stay away from the world.

After a lengthy battle with hospitals, I got my last surgery in 2016. It was worse than the last, I lost an ovary and my only good tube, even with IVF, it would be a long shot. I don’t think I can ever forgive my body for that blow, and it will hurt to my dying day. Recovery was difficult with a few traumas in hospital, but once home I flourished. A few weeks later I was back in hospital again as my gallbladder decided to pack up on me too.

Recovery was more frustrating than anything. Since then I’ve taken nothing more than the odd off the shelf painkiller. I was desperate to start exercising. I joined a local ladies jogging club called Sevenoaks Ladies Joggers, and did their beginner programme and ran my very first 5k with them. I then took up couch to 10k three times a week and ran with the club on Saturdays. Injury and doing too much put that on hold for a few months.

In Jan 2017 I made the big bold move to London. Once settled I was determined that nothing would stop me running with RunThrough. I signed up to the Feb run at Olympic Park. I hadn’t run at all since mid September, and never in an organised race. I was terrified. My cousin Carey was running in the same race, another inspiration for me, and we met up at the start. It was freezing, exhausting and it was the best run I ever had.

I’ve still a long way to go, running wise, I’ll never come first, but I do good for me and what my body can do. I’ve joined my local athletics club; Victoria Park Harriers recently and do speed training with them. They’ve been amazingly supportive to the girl at the back, huffing and puffing her way around as they lap me over and over, but I never feel like a loser. My current goal is a sub 35 5k, with a long term of sub 28! Maybe one day! 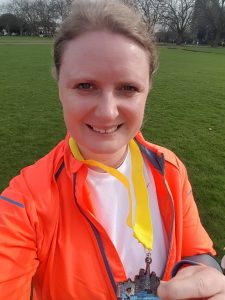 I couldn’t have gotten where I am now without RunThrough. You’ve inspired me unknowingly for years. I’ve always felt a part of each and every run. I got my 11th medal at Brixton last week, through the worst heat and painful shins. The support and encouragement from all the members of the team is amazing, no matter what your pace. Everyone in the chat group set up is amazing, where we all share our achievements, no matter what size. For the first time in years I’ve felt a part of something with like minded people and I love every moment.

I don’t know how long I’ll be well for, till I relapse again. But for now I will make the most of every running moment, and if I ever have to stop, I’ll some amazing memories to look back on.

I hope that someone reading this with the same problems finds some strength to keep on fighting for the right surgery and right treatment, and it gives them some hope that you can live life again.

And as my beautiful friend reminds me often – Forgive yourself, you’ve done nothing wrong, and be kind to your body, it’s been through so much.