In the autumn of 1987 my father, Allan, set off to the Pennines from our home in Liverpool. His aim was to run the full length of the Pennine Way, 260 miles, to raise money for Alder Hey hospital in memory of his niece (my cousin) who had lost her life to meningitis at the age of just three years old. 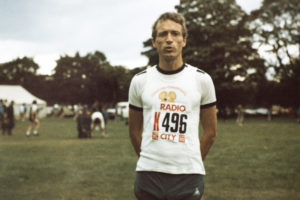 To run a marathon is a great achievement. To run a marathon a day for ten days straight, up and down hills on rough terrain, would seem impossible. A kind of ultra-run before ultra-running became a thing. How he did it I don’t know, but he did it nonetheless. He was someone who had a lot of determination.
Fast forwards to the start of 2020 and I found myself making the decision to take up running and setting my own rather more modest target. To run a 10k race in a time of under 50 minutes. To be fair to myself, I was not a committed runner like my dad and I was about 12 yrs older than he had been when he went off to conquer Yorkshire.
Like my dad I also wanted to raise money for charity in memory of someone we had lost. That someone was him.
In Dec 2017 my dad fell suddenly ill and was quickly diagnosed with cancer of the brain. Surgery and radiotherapy helped in the short term, but we knew from the outset that the condition itself was not curable. My dad passed away in the summer of 2019, aged 68.
So off I gingerly went in the January cold and rain, starting with just a kilometre or two at a pace of about 7 mins per kilometre, trying to burn off all that Christmas indulgence and resurrect memories of my days as a member of the school cross-country team.
By March 2020 I was building a bit of fitness and running 5k or so, when I came down with what I thought was a heavy flu. Aches. Incredible lethargy. And then the irregular breathing. I had caught Covid, and was quarantined into my loft, bed-ridden for several weeks.
It was June before I felt able to run again, and so started the journey all over with runs of just a few kilometres. I eventually ran my first training 10k in late July, before another setback. Five-a-side football finally had it’s way with my back, causing a flare up of sciatica as well as the decision to hang up my (astro) boots for good.
So into September, and a second restart with the training. By mid-October I had gotten back up to 10k, so I entered the November Run-Through 10k to take place in the Olympic Park in Stratford, East London.
Which of course was a massive, and disastrous, tempting of fate. Next came a true double-whammy. On 23 October, the day before my birthday, I tested positive for Covid for a second time and was bed-bound once more for around 2 weeks. Then in early November I had a minor, scheduled medical procedure that resulted in a serious internal infection. In and out of A&E three times in a week, admitted for one night. It put me out of all exercise for 3 months.
I won’t deny a certain sense of trepidation (not to mention deja vu) when I tied up my laces and went out for yet another “first training run” in late February of 2021. Slowly I built up my stamina again, slowly trying to increase my pace and distance each time.
In late March I decided to take the plunge and re-entered for the May 2021 Olympic Park run. April passed without incident. In early May my first Covid vaccination left me low for a day or so but no more. And so finally, the event I had had in my sights for almost 18 months, arrived.
Heading to the Stratford course about 30 mins before the race start, I joined in some of the stretching exercises and warmed up, donning my charity t-shirt (a striking crimson number provided by The Brain Tumour Charity). The runners lined up, the gun sounded, and we were off.
It was a cool but dry day, and I tried to settle myself into a steady pace of just under 5 mins a kilometre, though I knew this might be touch and go. I won’t lie, the course felt a little less flat than I had hoped (I bet they all do!), especially the winding steep path at the end of each of the four laps.
It was fairly tough going, but I tried to stick at it. I sensed I was overtaking more than I was being overtaken, which gave me some encouragement. In the last 2km I really had to dig deep. The body telling me to stop, sit down, stop moving, the mind saying no, keep going, don’t slow down. 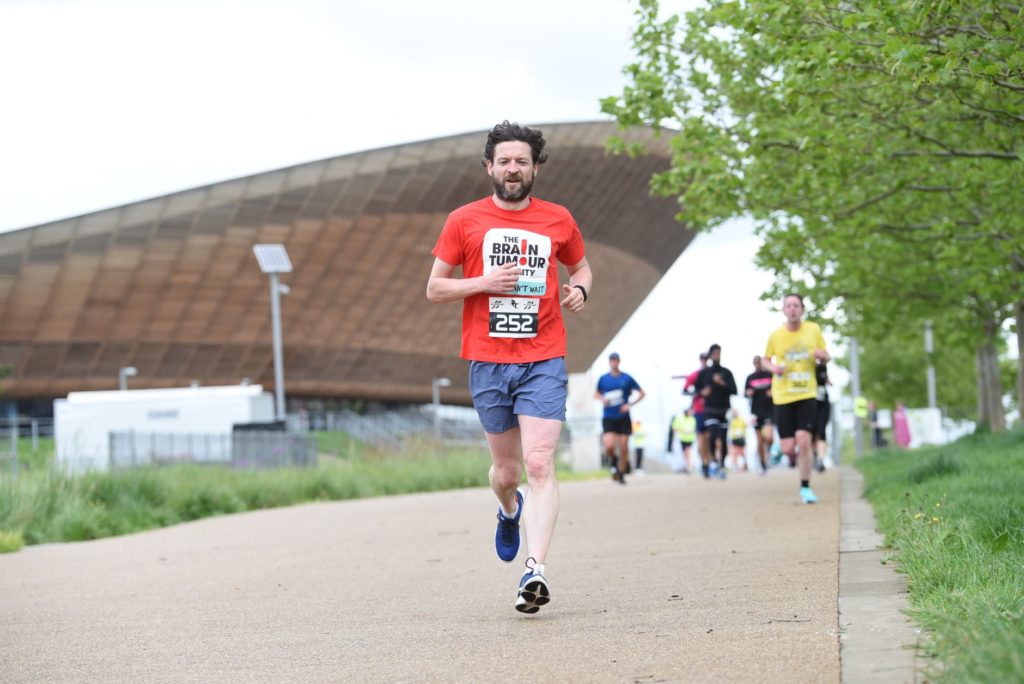 The last uphill stretch was a killer. I changed to a quick, short stride to lessen the pain. And as I reached the top and turned towards the finish a marshal called out to me: “Come on, keep going – you have thirty seconds left”.
What did he mean? Thirty seconds left for what? Thirty seconds until the 50 minute mark? It had to be. I had thirty seconds, and about 200 meters to go. I pumped the legs. I didn’t want to but I had to. I pumped the arms. I ignored the fiery pain in my lungs. I gave everything I had in those last 200 metres. And as I crossed the line, my legs about to give way, I glanced at the clock.
It read 50 mins and 5 seconds.
I was crestfallen. I knew I had done everything I could, I knew my body had nothing left. I knew people would say not to worry, that I’d done a great job. I knew I’d raised a great sum of money for The Brain Tumour Charity. I knew my dad would have been proud.
But I still felt I had failed. As silly as it might sound, I felt I had failed him. He set his target and he met it. I couldn’t do the same. I tried to tell myself not to think about it, and drank some water.
And then something occurred to me. As I crossed the line I had also stopped the timer on my fitness watch, so I checked it to compare. At first I was confused. The exhaustion of running no doubt. But then I realised what had happened, something confirmed later when the results were emailed to all runners. 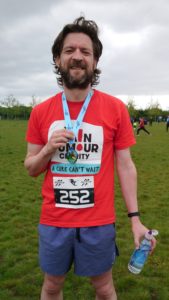 I hadn’t crossed the start line when the gun went, which is when the clock started. I had stood about 200 runners back, and queued for a while to get to the start. 50:05 was my “gun time”, but it wasn’t my actual time. My actual time was quicker than that.
I had finished the race in a time of 47:16.
To everyone who steps out in a pair of running shoes on those cold winter mornings, who thinks maybe they can’t do this, my message is simple. Yes you can. When you get knocked down, you get up. When you get knocked down once more, get up once more.
Because you can do it.
And you will.