Hi, I’m Jo! I’ve been running consistently for almost 18 months now, and for 6 of those I have been running with RunThrough at their events and weekly club sessions.

I ran sporadically when I was younger, but it was never something I enjoyed – it was just one of those things you were “supposed” to do to get fit. In fact, I was never particularly sporty at all: PE lessons were a twice-weekly torture and, although I played tennis (and still do when I can), I had to work hard to be any good at it. My whole family are actually very athletic, often winning trophies and medals at weekends for their respective sports, while I don’t think I ever entered any sort of competition, let alone came home with anything to show for it!

When I moved to London for work, I couldn’t find an affordable place to play tennis and wanted a cheap way to improve my fitness, which had gone downhill drastically while I finished my PhD. I decided to give running another go – after all, running is essentially free! In October 2016 I started plodding around the park, and, after a few weeks, I’d managed to build up from struggling to run 3K without stopping, to about 5K. That felt like such a long way, but also a big achievement.

However, I knew I’d need something to motivate me to keep training through the winter, and so I signed up to my very first race, the London Winter Run 10K in aid of Cancer Research, which I wanted to run in memory of my Grandad and Uncle. Without that motivation, I am sure I would have skipped a lot of the cold, dark training runs and probably would have fallen out of the habit of running altogether!

On the day of the race, I caught the train over to the start and, as I got closer, the tube started filling up with more and more people dressed in running gear, and I got increasingly nervous – they all looked like “proper runners”, unlike me. If it wasn’t for the fact that my family were coming to support me, I’d probably have turned around and gone home!

Instead, taking part in that race flicked a switch inside me and I finally got the running bug: it was such an amazing feeling to be part of an actual event, and the energy of the other runners and the crowds was just incredible. And, for the first time, I’d earned my very own medal for doing something “sporty”. I’d also inadvertently discovered a bit of a competitive edge that I’d never had before!

Another turning point came when I stumbled across an advert for a race with a group called “RunThrough”. I signed up and left work to go and “Chase the Sun” around Wimbledon Common one Wednesday evening in July. I distinctly remember the nerves I felt as, once more, I was surrounded by people who were pros at putting on race numbers (I still struggle with that…), lacing up their trainers and getting warmed up. I needn’t have worried though – the atmosphere was great, the marshals were supportive and enthusiastic, the organisation of the event was brilliant, and there were Wombles! Not to mention the flapjack at the end, which I now know is legendary! I’d enjoyed it so much that when I found out that RunThrough held a weekly intervals session, I wanted to give that a go too. I started running with the club in August, and since then, my running has gone from strength to strength. Plus, it means I no longer turn up to events on my own, as I always know that there will be friendly faces around. I’ve now run 8 RunThrough events, including my first half marathon, and look forward to completing lots more as a Season Pass Holder in 2018.

The final big twist in my first year of running came towards the end of 2017 when I found out about Runners World’s #MissionMarathon competition. I put in an entry for the chance to win a place in the Marathon, but never realistically expected to hear anything back. To my complete surprise, I received an email a few weeks later saying that I was a finalist, and asking me to attend a selection day in November!

There were three different teams – ‘Finish Liners’ for those who wanted to get over the finish line, ‘Speed Demons’ for those who wanted to finish in under 3 hours (and who are being supported by RunThrough’s own Ben Green), and ‘Breaking4’ for those who, like me, wanted to finish the marathon in under 4 hours. I was in a group with 4 other totally lovely runners, and we were assessed through 3 different activities, including a track session with Olympic marathon runner and Mission Marathon Coach, Jane Vongvorachoti. I was the least experienced runner there, as most of them had already completed marathons and had been running for years, whereas it was the first time I’d even seen a running track in real life, let alone run on one! I didn’t have much expectation, and decided just to enjoy the experience of having a day off work to run around an oval! So, I was shocked again when I was contacted just before Christmas to be told that I had won the marathon place,* and received my initial training plan from Coach Jane!

I’m now well underway with my marathon training and, so far, I’m actually really enjoying it! Initially I was daunted by the weekly long runs and big increase in mileage, as most of my running so far had been based on shorter, sharper tempo and speed sessions. It’s definitely a different style of running for me, but it’s great to be adding a new dimension to my training. I’m also working with The SCI, for nutritional guidance for training and the race itself, as well as help with cross training to keep me strong and, fingers-crossed, injury free!

I can’t believe the progress I’ve made since I started running – from training for my first ever race and just hoping to finish it, to now training for a marathon within the space of 12 months. I’m so grateful I found RunThrough, as I have met so many lovely people through the events and the club. My running has improved significantly since I joined and for that I give a huge amount of credit to the whole RunThrough team, but especially to Matt, Ben and Clare, for their support and for pushing me so hard!  Joining a running club was one of the best decisions I’ve made, and I love having a friendly bunch to run with every week. Above all, I am glad I found running, as it has been such a positive thing for my health physically, but especially mentally. I’m finding out that I am capable of far more than I ever imagined, and I only wish I’d found it sooner!

I never in a million years thought I’d say this, but it turns out running makes me really, really happy! 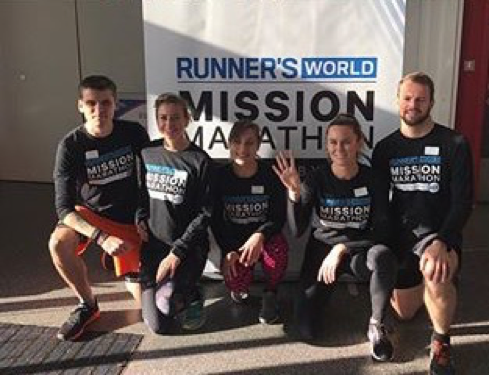 *I’m using my opportunity to run the Marathon as a chance to support two charities which mean a great deal to me – Cancer Research UK and Mind. If you are willing and able to make a donation, please go to https://uk.virginmoneygiving.com/JoHumphrey2

You can also follow my marathon training with regular updates via Instagram (@jo.runs.n.stuff), or weekly updates on my blog www.jorunsnstuff.wordpress.com