After being a competitive swimmer throughout my childhood and teen years, alongside any and every other sport I could get involved with, I quit when I went to university to study Fine Art. Swimming is one of the most intense sports there is and I knew I couldn’t maintain it alongside studying and having any form of social life. The problem is, I am too competitive to do nothing so I went through phases – netball, the gym, spinning – but nothing quite scratched that itch. Then, reluctantly, I had a go at running despite the longstanding joke that swimmers are incredibly fit but unable to propel their own bodyweight on dry land.

That was it. In the six years from then until now I have run consistently, with varying goals, distances and reasons. I did 10kms, found a love of half marathons and even threw in some triathlons to make use of my swimming past.

Then my boyfriend proposed to me and all anyone could ask me about was the wedding, as if all I was now was a bride-to-be. So, obviously, I signed up for a marathon that was two weeks before the wedding to create a distraction. It was wet, after a solo winter training block, and it was in Wales – not the easiest introduction. But whilst my ever supportive and ever patient fiancé sat in the car writing his vows, I completed my first marathon in 3 hours 43 minutes. I was ecstatic, I had qualified for the London Marathon Good for Age entry, but I already wanted more!! 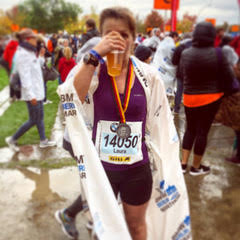 Sadly I never bettered my London time of 3 hours 22 due to injury but I had fallen so much in love with the distance – and even the hours of dark, solo training – that that didn’t ruin my experiences, certainly not at the World Majors which are unbelievable experiences of communal grit, support and emotion.

I would have loved to have carried on and become a Six Star Finisher but I knew my body needed a rest so 2020 was going to be a year for slowing down and recuperating. Then in May I found out we were pregnant!

During lockdown, running and cycling helped me retain some of the structure and focus that I thrive on so, rather than stopping, I just lowered the intensity – not pushing as hard or as far. Running gives me time outside, let’s me think of everything and nothing all at once, helps me be aware and appreciative of my body, gives me goals and helps mental health – especially going through early pregnancy in the middle of a global pandemic. I wasn’t going to stop until I no longer saw those benefits. 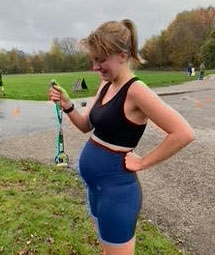 Events being cancelled meant I wasn’t getting jealous of not taking part but I did have to relearn how to run – to be content in the running, not the achievement of time. And now here I am, 26 weeks pregnant having just completed what is likely to be my last race before Baby Biddle arrives in early February. RunThrough’s Heaton Park races are challenging and often wet but also consistently well organised and friendly, with portions of the best flapjack dished out at the end, so I knew this was the event to finish on. For now!