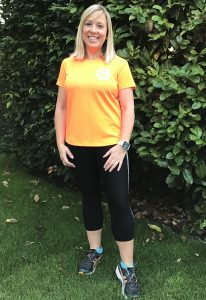 Sarah Foster has taken on the challenge of running every day in October; she tells us all about it here….

As I write this, I’m 23 days into a month of running every day.  It’s not something I ever thought I’d manage, but I’ve surprised myself – surprised at the fact that I’m still going and surprised at how much I’ve actually enjoyed it.

I don’t think of myself as a runner.  I live near the start of the London Marathon and have watched it ever since I was little.  Every year I watch the hordes of people running past and wish that it was me, but until last year, I couldn’t run for a bus without reaching for my inhaler and would then be shaky for the rest of the commute to work.

[toggle title=”More about Sarah’s running story” state=”close”]I started a beginner’s running course in January 2015 with my local running club – The Greenwich Runners. The culmination of the seven week course was my first proper 5k run (without stopping!). I was hooked instantly and started attending regular sessions. Don’t get me wrong, it was pretty tough – I came close to vomiting a few times during the first couple of months and it felt like a big step up for me, but the group were very welcoming and I started to notice a difference in my fitness.

I got a few 10Ks under my belt, including Run Through races in Greenwich Park and Victoria Park, each time knocking a minute off my time. It was then that I decided to enter a half marathon. Probably a bit silly really, given that I’d only ever run six miles. In February 2016 though (a year after my beginners course), I ran the Wimbledon Common Half. I was reassured that there were people that seemed to be going at my pace, until my knee gave up on me at around ten miles. This is where I regretted the lack of training. I was supposed to do long slow runs at the weekend and they were always slow but the trouble is they weren’t very long. I limped to the finish in around 2 hours and 40 minutes. I was broken, but at least I got to hug a Womble.

Then, shortly after, I got a last minute place for the London Marathon. I jumped at the chance, but then was filled with dread. How would I make it with only 2 months to train, when the most I could run without pain was 10 miles? Well, I sought help from a physio and made those long runs longer (albeit very slow) and thought I might just make it. I had a family holiday to Florida thrown in so took my running shoes for a bit of running in the sweltering heat. All was on track when, with two weeks to go and suffering with jetlag, I tripped on the pavement and broke my wrist. The thing is, I’m a bit stubborn and didn’t want anything to stop me doing that marathon, so I just asked for a lighter cast. With a dodgy knee and a broken hand I finally ran the Virgin London Marathon in 5 hours 58 minutes and loved every single minute! It was an amazing experience and one I’d love to repeat.

I’m often asked about whether I want to go faster but to be honest, a mile is a mile, no matter how long it takes and I find I have the most fun when I take my time, take in the view and can have a chat to a friend.[/toggle]

Running was a bit sporadic since the Marathon but my brother in law Owen suggested that we took part in the October Run Streak to get me back on track.  At first I was a bit taken aback – I thought he was suggesting naked running – but when I read more about it I realised he meant running every day.  Why not? I thought. There’s no minimum distance, so I could mix it up a bit.  With two days to go I asked him if we were still doing it.  I think he’d forgotten, but he is also a bit stubborn and likes a challenge, so we agreed to take it on.

Day one arrived and I found it really exciting to be getting my trainers on and heading out to see if I could do this.  I was certain that I’d give it my best shot, but part of me wondered if I needed more of an incentive, so I started writing a blog about it.  That way I thought that I’d have to run every day as people would be expecting me to write about it.

The first week was fairly easy as I had the support of friends who offered to come out with me and I wasn’t yet getting bored by the routes.  As time went on though, I was finding it harder to motivate myself and to find the time to fit in a run.  I had to mix it up a bit, trying to get out before work some days rather than all in the evenings when I was tired.

It was also hard to find new routes to keep me interested.  I live by the river in Greenwich and love the view of Docklands and the historic maritime buildings, but was finding my usual route along the river a bit repetitive by the second week.  The park is now closed in the evenings, so that option was out.  So, I started running in different directions from home and am getting to know my local area a bit better.  I’ve found pubs I didn’t know about and passed new playgrounds to take the kids to.  I’ve also explored the area around my office in West Brompton a bit more – there’s the beautiful Brompton Cemetery and lovely river paths around Battersea. 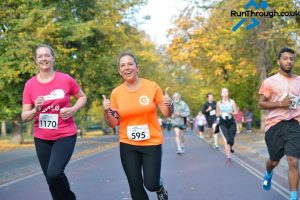 As I write this, I am chilling out on my sofa after a very enjoyable Run Through race in Greenwich Park.
I nearly didn’t make it.  As I’ve said, I’m a bit accident prone and yesterday I fell through my ceiling.  A bit bruised and battered, but determined not to miss a day, I set out to do ‘just’ the 5k today (the ‘medicinal’ gin cocktails at a dinner party last night also took their toll).

I actually really enjoyed today’s run.  My friend Zoe and I chatted on the way round, managed to run all the way up that hill without stopping and still managed a respectable 30 minutes and 59 seconds!  Great bling, great flapjack and great fun – as usual.

I’ve been amazed by the amount of interest my friends and family have shown in my running and the blog.  I’ve been asked if I’m going to carry on the run streak into November.  There have certainly been benefits – I’ve lost weight, my skin is the best it’s been in ages and I feel so much happier with the world.  Two weeks ago I’d have said no way, but who knows?  Tomorrow’s another day……….. 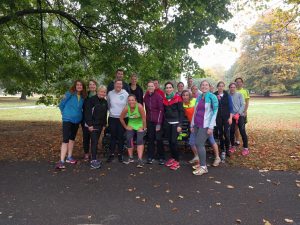