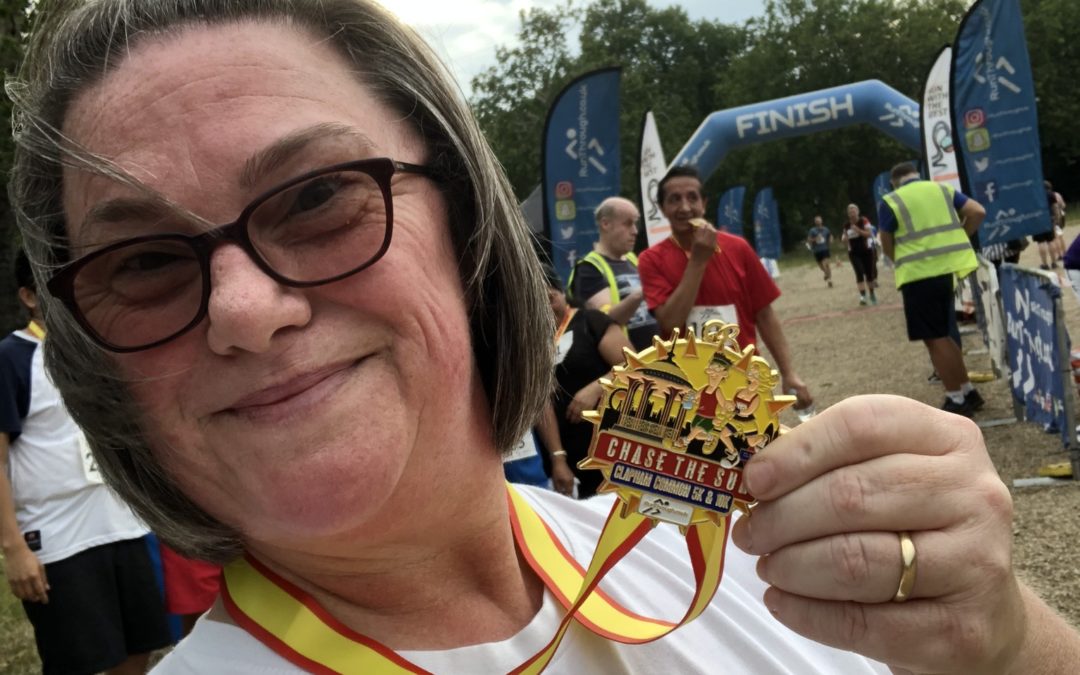 Hi my name is Sam and I am 46 years old and live in Bermondsey, southeast London, and over the past 6 months have developed a love for running and now I am running (well maybe a fast jog) 5k comfortably, but my journey to this stage has been eventful to say the least.

So how did I reach Clapham Common on 17th July 2019 to run in my first run through event, well my journey actually began way back in early 2017 when I decided that I would start running  as a way of keeping fit. I had been feeling unwell and tired for quite long time and thought that a bit of exercise and fresh air would do me some good. So I just started to run around my local park.

I was enjoying my new found hobby, but soon after I’d began running and a lot of investigations and tests at the hospital later, it was confirmed that I had pancreatic cancer. I was the third member of my family to be diagnosed and actually the only one that is here now to raise the much needed awareness for getting an early diagnosis.

My running came to an abrupt end and instead I was being booked in for a major operation (the Whipples procedure to be precise) to remove my tumour, which had decided to attach itself to my pancreatic head. I am one of the lucky ones that got the chance to have surgery as the majority of people who are diagnosed are not so lucky. My operation was performed on 17/07/17 at King’s College Hospital by a very talented specialist team (HPB, Hepato-pancreato-billary) and it took 12 hours, I spent another week in hospital recovering, not really taking in the enormity of my surgery and thought that within weeks I would be up and about, but my body had other ideas along with my consultant, who wanted me to have six months chemotherapy treatment just in case any of the cheeky cancer cells decided to hang around. Now was the time to eliminate them all!!

Well chemotherapy what can I say about that apart from it’s the toughest thing I have ever been through, its takes away everything from you. There were points where I did not think I could continue on with the treatment. I had to go to Guys cancer centre every week, but with strength I never knew I had and the support from my husband, family and friends I continued and finished my treatment. A week later I went back to work, maybe to soon but I needed to start to get my life back on track or block out the last 9 months I was not quite sure at the time, but looking back I think I was trying to pretend that it all did not happen.

I would like to acknowledge the care and support that I did and still do receive from the cancer centre, it was one of these support groups that was my turning point to a healthier lifestyle. I attended a joint dietitian and physiotherapy course that ran for 10 weeks starting in January of this year, which led to me deciding to return to running so first I completed the couch to 5k program (I even ran while on a two week all-inclusive in Mexico, that’s dedication for you!!) and then just ran as and when I could, I try to get out and run 3 times a week. We have also formed a small group at work that run occasionally and give each other encouragement. I just enjoy the feeling that you can switch off from the world and run. My favourite time to run is in the morning just after it has rained and the air has that damp fresh smell, what’s your favourite time to run?...

So back to Clapham Common on the 17/07/19 and how I found RunThrough. It was the 2 year anniversary of my surgery (not many people get this far sadly) and I wanted to mark the occasion so what better way than to get a medal, so I googled (well doesn’t everybody) runs that were on this date and the Chase the Sun event came up, it did take me a few weeks to pluck up the courage to sign up, but I did, and I came, and I run and got a medal which I will get engraved on the back with the date. I’m not really feeling the need to get a whole load of medals, but I may be joining you guys again on another run soon as I will need to have another flapjack, they are so yummy.  There will be another medal next year as I have signed up to a 10k race in London, so training will commence shortly. I had my mum and close friend along to cheer me on and I did run my fastest pace yet. So thank you to all the people who ran that day, I had many words of encouragement from you guys and thank you RunThrough for putting on these events on random days of the week as dates will always mean something to someone somewhere.

Till we meet again, and we will, happy running guys!