RunThrough’s Hero of the Month

This month’s RunThroughUK hero (our first ever!) is Juliet Bowen. I’ll let her take it from here and I’m sure you’ll see why.

Juliet, why did you start running?

So I started running 2 years ago, completely from scratch. And from scratch I mean with absolutely no fitness or stamina at all. I had been advised for a while by my doctors to take up some form of exercise and to eat more healthily. One day, after a particularly bad few weeks of illness I decided to take this advice and try to be the best and healthiest version of myself. It wasn’t going to cure me by any means, but I knew it would make me feel better. I suffer from various health problems which, without going into too much detail, are unfortunately very unpredictable. People find it hard to understand ‘invisible illnesses,’ because I look ‘ok’ people assume that I am. I have many days where I can’t even get out of bed, many days where I end up in A&E with excruciating pain or a collapse, but I also have days where I can run a half marathon! A lot of people find this hard to understand but my illness is so up and down that I have to take each day at a time, and assess each day what I think I am capable of. There are many days where I have to cancel a planned run or abandon a training session half way through but then I also successfully complete many runs and I love to do a lot of races when I can. Races give me something to aim for, targets and goals that motivate me and give me a sense of achievement and delight when I reach them. My first race was a 5k race for life. 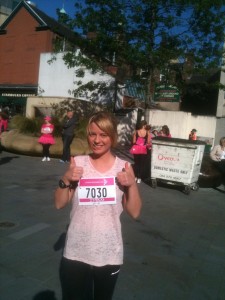 After the race a friend suggested I do a 10k which seemed so laughable and near impossible at the time. But here I am 2 years later having completed over 20 10k races and 4 half marathons with varied success! 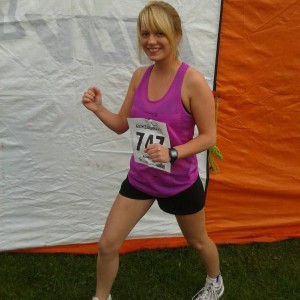 I am still very much a novice and would say that ‘I run’ rather than ‘I am a runner,’ but I love it. I have suffered a number of setbacks since I started running, having had 4 brain operations and many long stays in hospital.

It can be so frustrating that just I am starting to get somewhere with my running and improving on my times, then I’m back in hospital again. After a long spell in hospital I have to completely start from scratch but I deal with this by setting myself new PB’s and new, more realistic goals. This helps me to keep positive and try and not expect too much of myself too soon.

What was the last run you did?

The last race I did was Run Hackney which was probably my hardest race to date! It is the 4th half marathon I have done and by far my worst time as I was only able to do very little training and was melting in the heat, however I knew that there was no way I would get a PB so I hardly looked at my watch and tried to enjoy it as much as I could. I strongly believe in ‘run your own race,’ which is something that I always try and do. I cannot compare myself to other runners or even to the runner I was before all my surgeries. I just have to go with the flow, push through the pain and be grateful for every step that I am able to run. 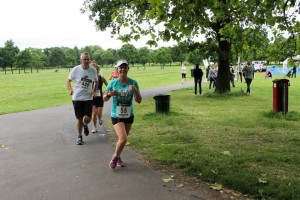 Just happy to be running again at the RunThrough Clapham Common 10k!

And what brought you to the RunThrough RunClub?

I had done a couple of RunThrough races and been very impressed with the organisation and friendly, relaxed atmosphere, so when I heard about the RunThrough running club I was very keen. As with all these things, it’s a little scary to turn up on your own so I suggested it to a friend who was equally as keen and so we made a date to attend our first session. Having unfortunately collapsed at the end of one of the previous RunThrough races (which Matt and Ben handled brilliantly!,) I assured them that this did not happen every time I tried to run and that I generally know my limits and can usually finish a training session/race still in the upright position!

The thing that I love about the club is the sense of inclusiveness and the fact that no one judges you based on your ability. Matt and Ben are fantastic at encouraging us and pushing us but at the same time they are aware that everyone knows their limits. I never feel like I am being judged when I have to miss out on one of the reps or take a rest of even cut the session short. They, and fellow runners are amazing at encouraging me however much I can manage and I never feel even slightly disheartened at being at the back! We do interval sessions which push you to your limits, something that I would never have the discipline to do on my own, but doing it with a friendly bunch of people makes it a little more bearable! Run-Through brings a social side to running which I think can often feel like a very lonely sport. It is also a support system, as although we only meet on Mondays and sometimes I can’t make the sessions due to illness, I always feel supported by my fellow runners on social media. Also, recently we have started to meet up for runs outside of the Monday sessions, something which I hope we can do more of. Running buddies make such a big difference!!

What’s your next goal?

My next goal over the coming months, provided I have no more hospital visits is to try and beat my PB’s over 10k (51mins) and HM (2hrs) distances. Ultimately I would love to run a marathon – I have entered the ballot for London 2015 but am secretly hoping I don’t get in as I don’t feel very ready for that challenge at the moment!

The best run I have done would have to be the Sheffield Half Marathon 2013 (back when they actually had water en route!). This was my first half marathon and was 3 weeks after I had come out of hospital still with stiches in my head so was a real challenge. I did it in 2hrs 9mins which I was so pleased with. Before the race I was really doubting myself that I could run that distance and at the end I must admit I got pretty emotional! 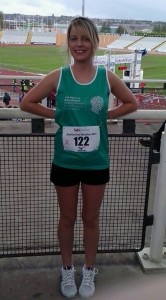 My first half marathon – 2hrs 9 mins

Running mantra for when the going gets tough?

“Run when you can, walk when you have to, crawl if you must, just never give up.” Dean Karnazes