I’ve loved rhinos my whole life! So when I heard that there were so few rhinos left in the wild that we risked losing them forever, I knew that I had to get involved and started running and fundraising for Save the Rhino International. A very special charity that is working tirelessly on multiple fronts to protect this awesome species for future generations.

There are 5 different species of rhino in Africa and Asia and sadly 3 have been classified as critically endangered. The two greatest threats they face are from habitat loss and even more tragically from poachers and the twisted trade in rhino horn. That sees these magnificent animals killed simply for their horn!

I ran my first marathon as a rhino at London 2009 and have never looked back. The Save the Rhino costume is iconic! As an emblem of the struggle to save the species, I feel enormously honoured every time I wear the suit and so far I have raised nearly £13k through all the rhino marathons and challenges I have run. 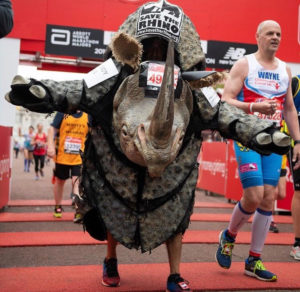 To further help the cause I have even written a childrens book, called Matumaini: The Rhinos’ Hope. It’s all about guess what a rhino that loves to run.

Matumaini is the name of my lead character and also the Swahili word for “Hope” and it’s my hope that through her adventures “Little Matu” can inspire a love of rhinos and bring about much needed change. It’s available from Amazon and Waterstones and I’m donating 50% of my proceeds to Save the Rhino while donating as many copies as possible to various children’s charities.

I honestly believe that without the tireless work of Save the Rhino we would have already lost species of rhino entirely so I won’t be stopping running or writing for them as long as there are rhinos out there that need saving!

As with my love of rhinos I have also always loved running. So it’s the privilege of my life that I get to combine the two and run as my favourite animal so often. I often joke that I am almost more rhino than human these days as I spend so much time training and running the rhino costume. As I say Sunday’s GoodWood Marathon was the latest in a long line of rhino running challenges that I’ve been taking on to raise awareness to the plight of my favourite animal. 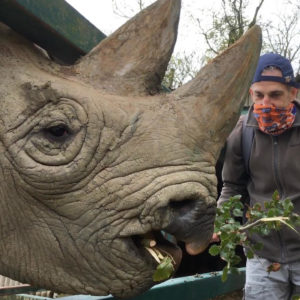 Running over 1200 event miles in the costume including 38 Marathons, 6 Ultra Marathons, 2 Half-Marathons and Yorkshire’s 3 Peaks Challenge all in the rhino suit.
The rhino and I joining the Leeds Rhinos Rugby League team during one of their training sessions. 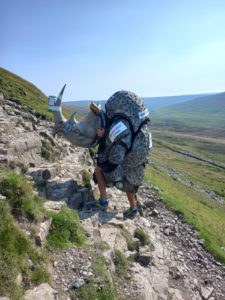 Running Yorkshire’s 3 Peak Challenge in the rhino costume on my birthday in July last year which also happened to be the hottest day of the year. Scaling peaks in 28 degrees inside a rhino suit may not sound like a great way to celebrate but I absolutely loved it and all the support the rhino got that day inspired me round in 7hrs 58mins.

Running a marathon with the rhinos help inside an old prison, through A and B wings, around the courtyard and up and down over 10,000 stairs!

Running a Dawn to Dusk event where I managed to rack up 36miles in the costume in one long day of rhino action. 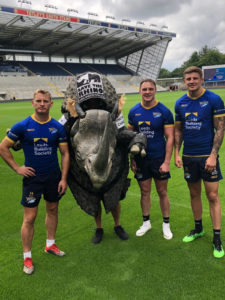 Perhaps best of all was the challenge of the rhino and I being put through our paces during a Q&A session with primary school kids in Sheffield. It was wonderful to see how much the children care about saving our planet and the animals we are so lucky to share it with!

In order to sustain Rhino match fitness for all these events I have to train in the costume a lot! Personally I love any excuse to wear the costume. I see it as an opportunity to spread the rhino word and to fundraise as you never know who you are going to meet, even running around the block.

One of the best things about the costume is that it seems to bring out the big kid in everyone. Although people are often shocked initially when they see a huge rhino bouncing round the corner, that shock and surprise almost always quickly turns to big grins and laughter. When people find out why your running and about the work of Save the Rhino they really want to help. So on my runs I attach a donation jar to the horn just in case and I’m always touched by the generosity of folk. 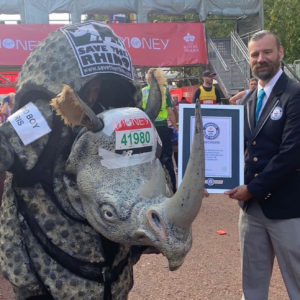 My first ever Marathon as a human was at the New York Marathon in 1999 and all being well my 100th Marathon/ Ultra is due to be 19th March this year). I’ve run 4 Ultra events of 100 miles or more as a human (3 of these last year alone). Among these was running the entire length of the 130 mile Liverpool/Leeds Canal non stop which took 32hrs 55mins. Basically I love running regardless of terrain or distance. Like a Rhino Forrest Gump however, running in the costume is without doubt my absolute favourite!!

In order to raise as much awareness as possible to the plight of my favourite animal. I am always dreaming up new rhino challenges that I can take on in order to grab peoples attention. So the more unique a challenge the better, which is why running laps of Goodwood’s famous motor circuit appealed so much. I see the rhino costume as a great opportunity to spread happiness and rhino joy and it’s the ultimate way to highlight the important message regarding the rhinos plight.

So I do try and make each challenge as much fun as possible. Throughout the pandemic for example, even when lockdowns restricted so many fundraising opportunities I tried to dream up new ways of maintaining momentum. Wether it was dressing the rhino up or taking on a virtual Kilimanjaro climb in my home during the first lockdown I’ve always tried to generate interest. Everyone seems to love the rhino as I say, but they rarely realise the trouble they are in so I see it as my job to shout about it. 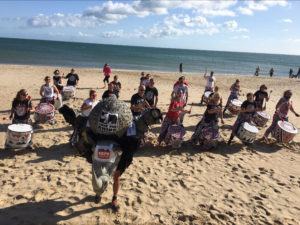 All these adventures are yet more reasons why I’m even more grateful to rhinos to all the people who are helping me to get the message out there. So once again, I’d like to say a huge thank you to yourself and to Run Through events. I loved meeting everyone and running at Goodwood and I’m so grateful for your interest now. Rhinos are peaceful, gentle giants that represent everything in this world we need to protect! They desperately need our help so I really appreciate any opportunity to get them attention and much needed support. Together we can help the safety and the space they so deserve!